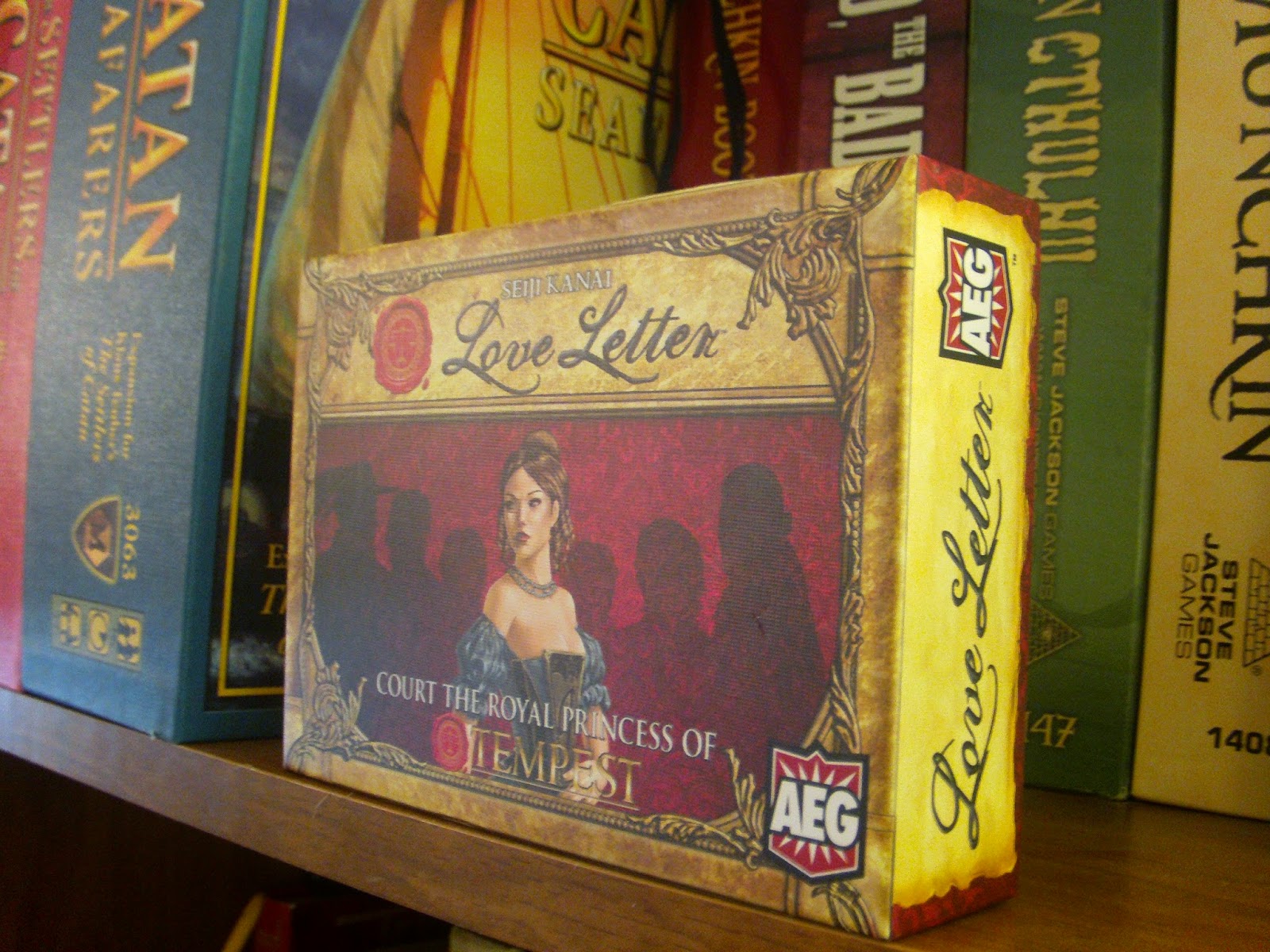 Love. It is a confusing, messy, intangible process, made even more so when several people are all vying for the attention of a single individual. What’s that, you say? That isn’t enough of a challenge for a Casanova such as yourself? How about we up the ante by making your unrequited love a member of a royal family and add the stipulation that all of your advances must be made in secret through a series of love letters handed off for delivery to different occupants of the same castle? Are you nervous yet? Feeling those butterflies in your stomach? Good, because your heart is about to be savagely broken.
Love Letter is a card game for two to four players by game designer Seiji Kanai and published by Alderac Entertainment Group (or AEG). This nifty little card game consists of only sixteen cards, four reference cards and thirteen small, red Eurocubes (or as the game calls them, Tokens of Affection). Each of these cards shows an image of a certain resident of the local castle. Each of these cards also has a number from one to eight, with one being assigned to a lowly Guard and eight assigned to the much vaulted Princess (whom each player is trying to court with their titular love letter). At the end of the round, whichever player is holding a card that is closest to the Princess succeeds in wooing her and receives a Token of Affection. Once a player has obtained a certain amount of these Tokens, the game is over, with that player having successfully wooed the Princess.
Does it seem simple? Well, to be honest, it is. However, what complicates matters is that on your turn, you will need to draw a second card and then discard one of the cards in your hand, ever striving to get closer to that most romantic of numbers, the number eight. These cards also have directions written on them that a player must follow when the card is discarded. These directions can be as innocuous as secretly looking at another player’s card or as devious as secretly comparing the value of your hand with another player’s and the player with the lower value hand being knocked out of the round. As a matter of fact, there are a lot of ways to be knocked out of a round (for another example, if you are holding the Princess card and for whatever reason you must discard it, you are knocked out of the round). However, this isn’t as awful as most implementations of the dreaded mechanic of player elimination since the rounds are so short (there only being sixteen cards to play with in total.)
So, the game is short and simple to play. Fair enough, but is it actually fun? Yes, it is. It is even a fun game to watch, as I have done many times. Watching players eye each other over their hand of cards, trying to decide what cards their opponents are holding gives the game a tight, risky tension that I absolutely adore. In fact, I’ll go one step further and say that Love Letter can feel more tense and poker-like than an actual game of poker. If there was a mechanic of betting introduced into the rounds, I guarantee you would be sweating buckets as you tried to decide who to affect with the Prince’s ability, or whether trading hands with someone as the King could pay off. (Actually, now I’ve decided that that sounds brilliant… perhaps I should finally look into getting a set of poker chips?)
But I digress, as one so often does when they are in the sweet embrace of Aphrodite herself. Love Letter is a small, economical, well-designed gem of a game that is absolutely worth its price of ten dollars. The art on the cards is charming, as is the in game story included in the instructions. Play this game with some friends and you’ll be sighing, laughing and shaking your fists, all in the name of love.