In the first half of this interview (check it out if you haven’t already) I sat down with Wendi Ketchem, the manager of my local game store- The Game Preserve. We talked about her history with gaming and her experience attending different gaming conventions. This week, I present to you the second half of the interview. Enjoy! 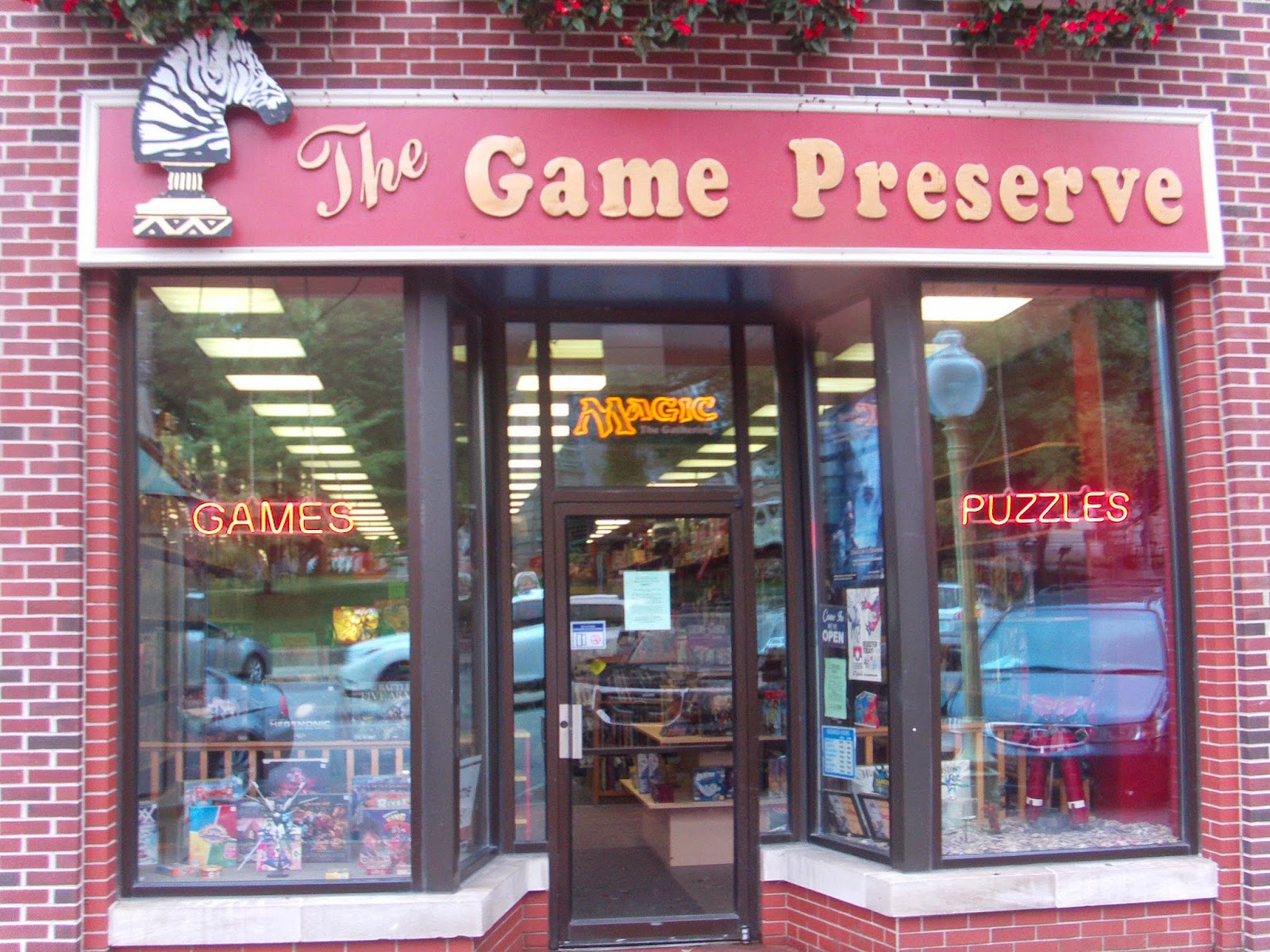 Board gaming has had such a revival in the past ten to twenty years. Has that been reflected in how many people have been coming through the door here?
We’re definitely getting more customers that are moving away from what are considered more traditional games like the Monopoly, the Life, the Clue and a lot of people getting into the eurogames like Catan, Dominion and Dixit. And we’re seeing an increase in that, which I enjoy. Not that Monopoly and Life and Clue aren’t good games, but they’re a completely different thing- they’re like beginner games. They don’t have a lot of meat to them. And to see young kids coming in and being like, “No, I want Dominion. Monopoly’s dumb- I want something that has some meat to it.” I enjoy that, and that has definitely increased in the last 5 years.
As we just touched on, there is this big influx of people wanting to get into board gaming beyond the staples of Monopoly and the like. What advice do you have for someone who wants to get into gaming, but doesn’t know where to start?
I usually try to find out what their interests are, like what kind of genres they tend to go towards. And then, I try to find what we like to call an introductory game. So, say you’re coming from Monopoly- we might introduce you to Carcassonne or Catan. They’re resource-based trading games- they’re not the same as Monopoly, but they have got that same sort of feel to them. And it’s what’s called an introductory game- it’s not super complex, it doesn’t take a long time to play- and then you work your way into other games. Like if you’re coming out of Magic or Pokemon and you want to get into board games, we might give you Dominion or Ascension, one of the deck-building games. Because it’s going to have the same feel as something that you’re used to, but is a little different and can move you towards more in-depth strategy. You never want to start someone off on something like ArkhamHorror– they’re going to hate it and be miserable. So you always want to start them with something that’s similar to what they’re interested in, but move them in the direction of more hardcore strategy, if that’s what they’re interested in. 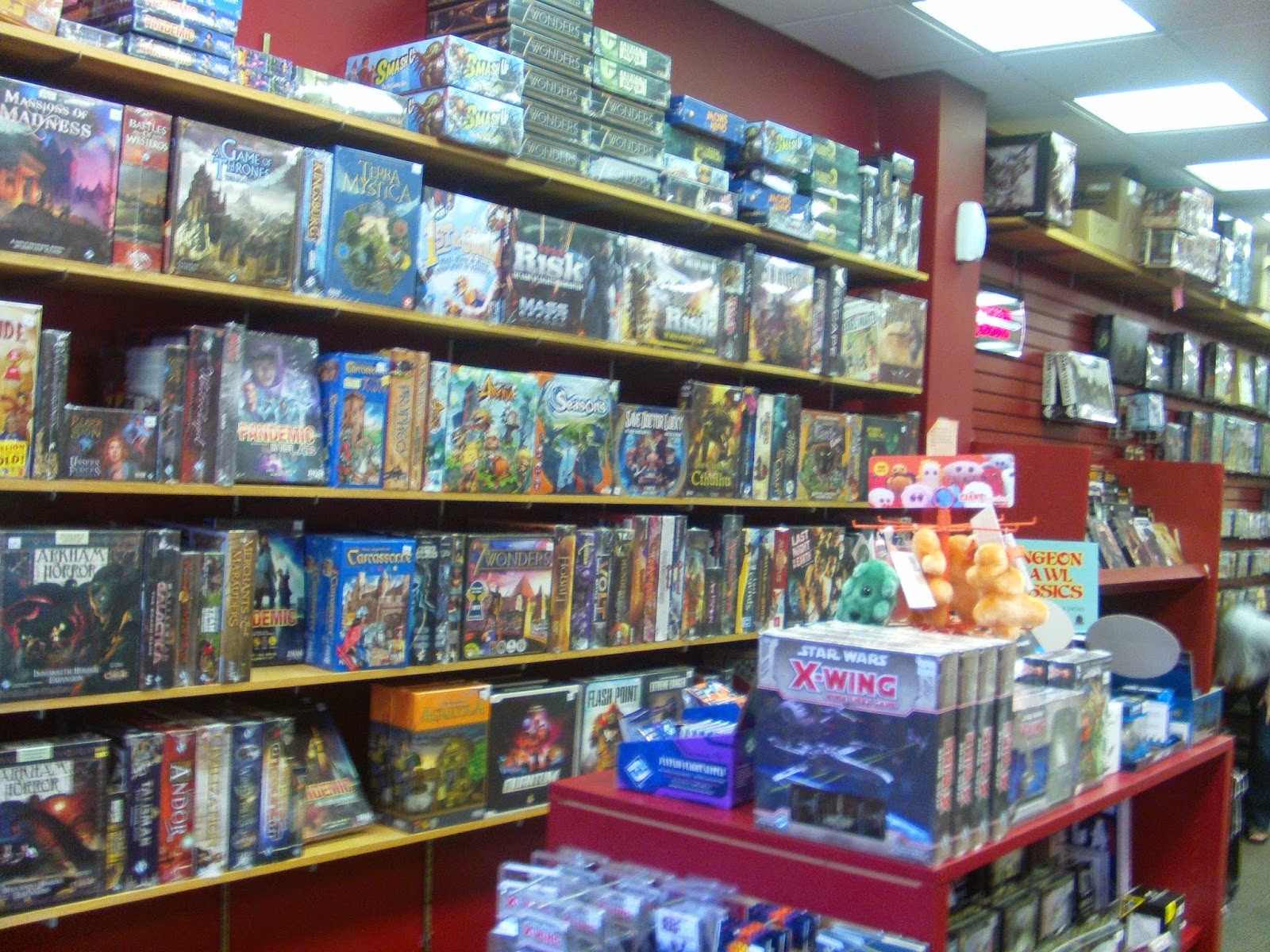 On a similar topic, there are people out there who do have games, know what they like, but (sadly) don’t have anybody with which to play them. Do you have any advice for those gamers?
I always tell people that we have open gaming any time, they can bring games and try to get people to play. There are two gaming clubs at IU [Indiana University] that are open to the public. We try to get people, you know, if someone is like, “I really like to play Descent, but I can’t find anybody to play Descent with me.” We’ll even post on our Facebook group page, you know, “Hey, we have people looking to play Twilight Imperium, anybody interested?” Because that’s one of the downfalls of some of those games- you need to have six people and six people that are willing to play for 3 or 4 hours. That’s hard to find, so a lot of times, we’ll try to hook people up with other gamers that we know play those games, so that they can get a game going. We just try to get people like that to know each other, because that’s how you build the community. You know, introduce people to other gamers that play and they can expand from there. 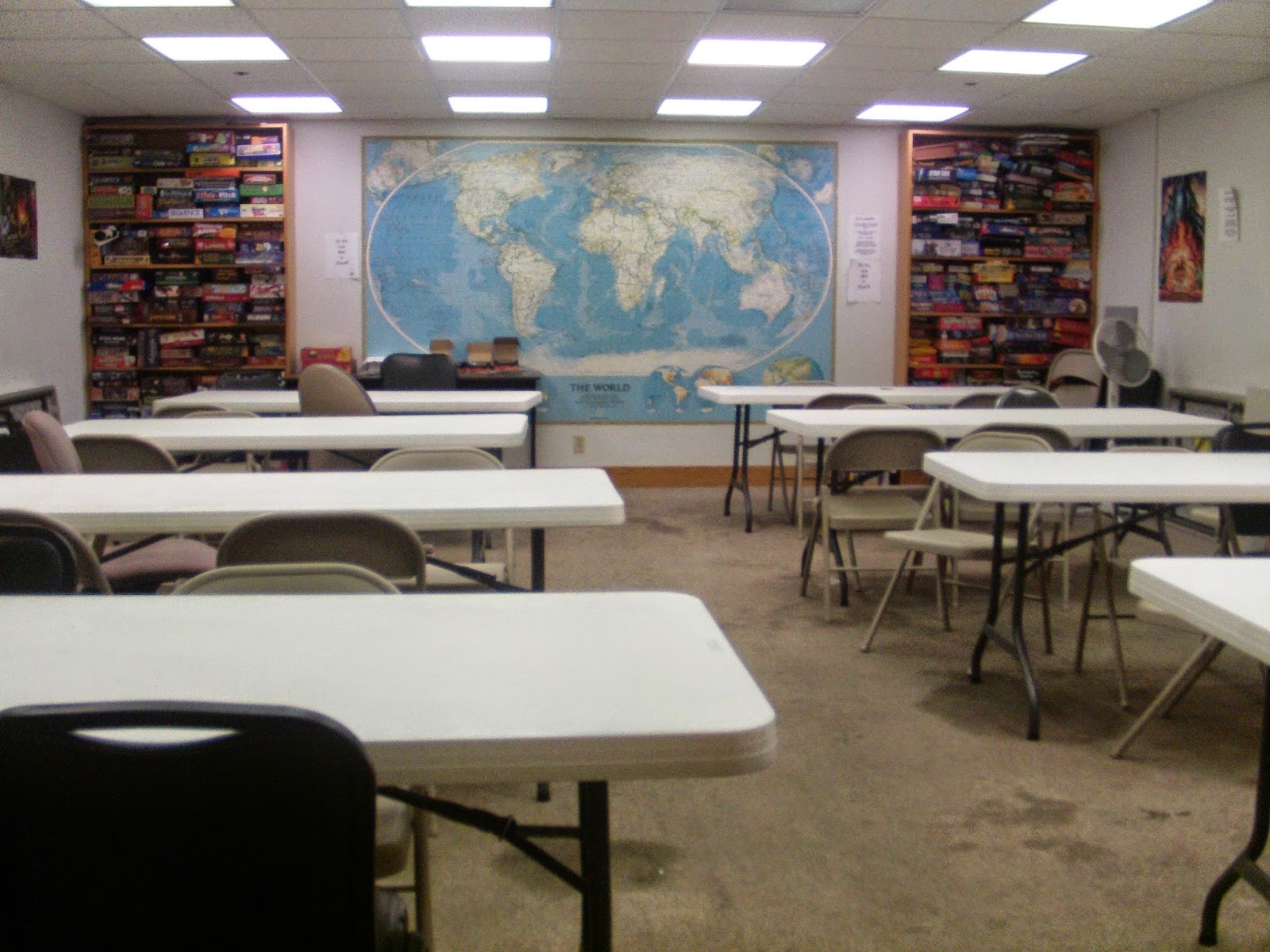 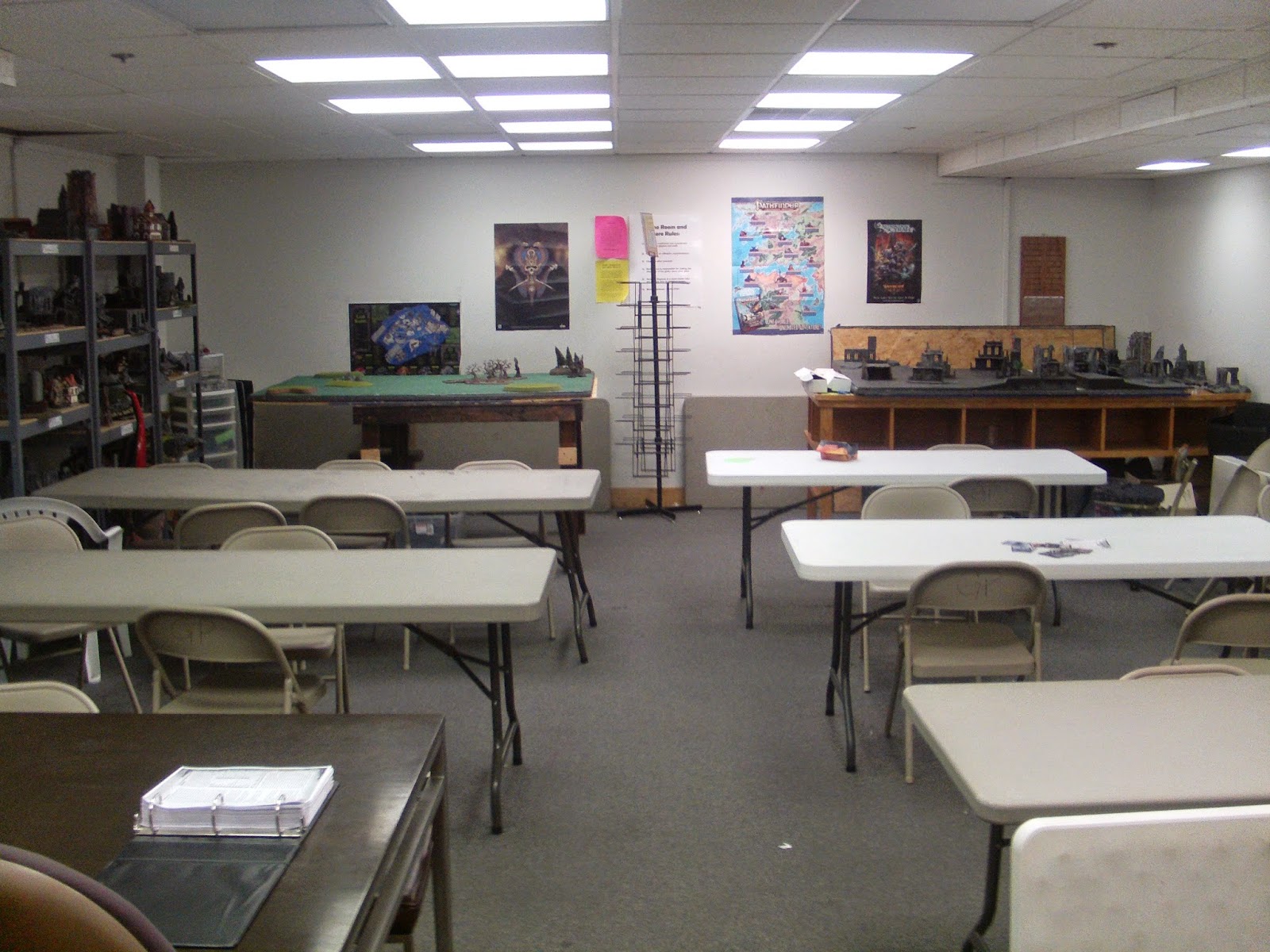 With the growing market of gamers, a lot of people have been turning to Amazon to find board games. How have you guys (as a small business) been competing with that?
Well, first of all, we offer gaming knowledge and experience. We can demo the game for you if you need us to and we also offer you a place to play. And that is something that Walmart, Target, Kmart, Amazon, Ebay- can never do. And we will price-match if it is within reason. Because we do want our customers to be happy and we do understand that if you can get something ten dollars cheaper, that you’re going to do it. Especially during the Christmas season, when times are tough and you’ve got to buy for kids- you’re looking for the best deal possible. We understand that, and so if there is anything that we can do, we will, to help with prices.
But other than that, our knowledge and the play space is something that a big box store and an online store could never offer. We also have an open return policy, which means if you buy a game and don’t like it, you can return it. So even if it’s been played, you can bring it back, we’ll give you store credit, we’ll do something to get you into a game that you’ll enjoy. Because we don’t want you stuck with a game that’s never going to get played. That doesn’t do anybody any good. It doesn’t help the community and it doesn’t help you. So if you buy a game and you go home and you and your family play it and you think, “This game just isn’t for us. We don’t like it, we don’t understand it-” You know, if you don’t understand the rules, we’ll try to teach you how to play it. If it’s just that you didn’t like it, then we’ll try to get you into a game that you will enjoy. Which is another thing that Amazon can’t do.
Now, if someone comes in with a particular game in mind, can they order it through you?
It depends on the game. Most of the time, yes. Occasionally it is out of print or- well, Kickstarter has caused a lot of problems lately, because there are games that aren’t actually in distribution, but they’re through Kickstarter. And so we’ll have people come in and try to order them and it’s just something that we can’t get because it never made it to distribution channels. But I would say that about 75% of the time we can get a game in. 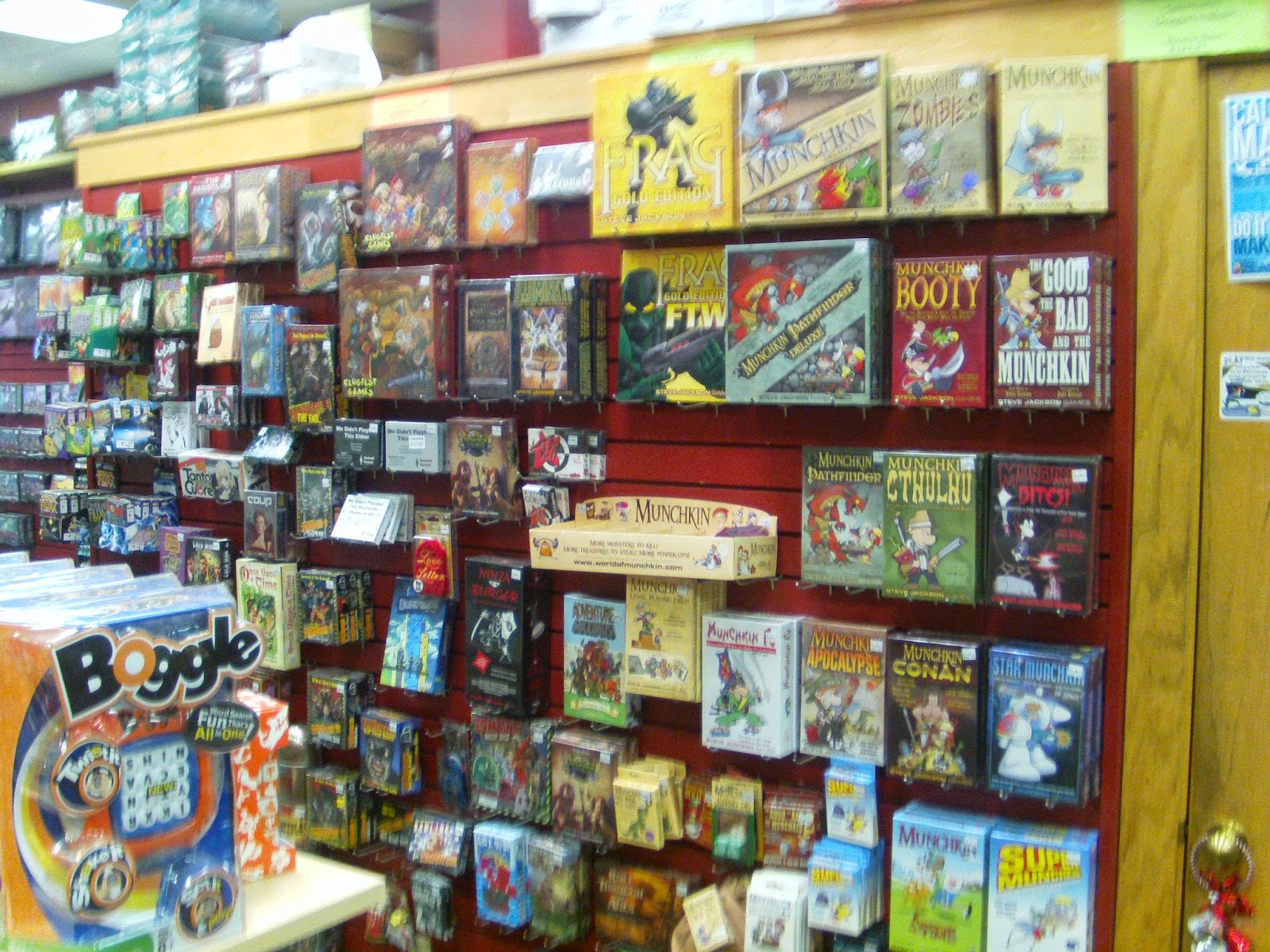 Since we’re talking about Kickstarter, is there anything that you’ve seen happening there that you’re really excited about?
I enjoy Kickstarter, I think it’s good because it gives companies that are smaller a chance to get games out there. The problem with Kickstarter is that we’re now seeing bigger companies going to Kickstarter and it is hurting our store. When you can Kickstart something from Paizo for Pathfinder or Reaper, when you can Kickstart their entire miniatures line for $150- that hurts sales in a brick and mortar store. Because, well, you’ve already got every miniature, you don’t need to buy any. We saw this with Zombicide. Zombicide was a hit- on Kickstarter. But nobody wanted to buy it, because everyone who had wanted it had Kickstarted it. So, you’re talking about a $100 game that’s a great game, but it’s really hard to sell because everyone who wanted it already has it. And you see that a lot with the higher-priced games. Where it seems to be really good is with the smaller-priced and smaller card games. Like some of the games that would have never made it to publishers are now getting out there, they’re now finding distribution and they’re making it into the stores. Because those aren’t the ones that get as much attention on Kickstarter and so when we get them, people are like, “Oh, wow. That’s really cool. I saw this on Kickstarter, but I didn’t Kickstart it- it’s really cool that you have it.” You know, like the new GetLucky, The Kill Doctor Lucky Card Game that Cheapass Games just put back out- that might not have ever made it. I mean, Cheapass Games is just now rebuilding their game company and they might not have been able to produce that. And we ended up getting it before even some of the people that Kickstarted it. And they were not happy.
Wendi laughs
I think Kickstarter, eventually the bubble will burst and Kickstarter will even out. Right now, we’re in that boom where everyone wants to Kickstart everything and they’re not paying too much attention to what they’re Kickstarting vs what they could be getting in a store. And I think that eventually the bubble will burst and it will be, “I’m not going to Kickstart that because I know it’s going to get funded and I will be able to go to my brick and mortar store to buy it.” And then there’s other games that they’ll be like, “This is kind of an expensive game, it probably will never make it to distribution- I’m going to Kickstart this one.” Well, we’ll finish up here. Is there anything that you’d like to communicate to my readers that we haven’t touched upon already?
The one thing that I could say is that the gaming community is- as a whole-  growing. The best thing that brick and mortar stores can do is try to support the gaming community as best as possible by making sure we have things available for them, by having places for them to play, make sure that they have what they need and get them in touch with each other. If new people come to town, make sure that you introduce them to where they can find games that they’re looking for- whether it be a LARP, whether it be a board game or a tabletop game- whatever their interest is. It’s making sure that they have the ability to get to it.
If you’d like to know more about The Game Preserve, you can check out their website here:
http://www.gamepreserve.com/
and their Facebook page here:
https://www.facebook.com/groups/31284957427/