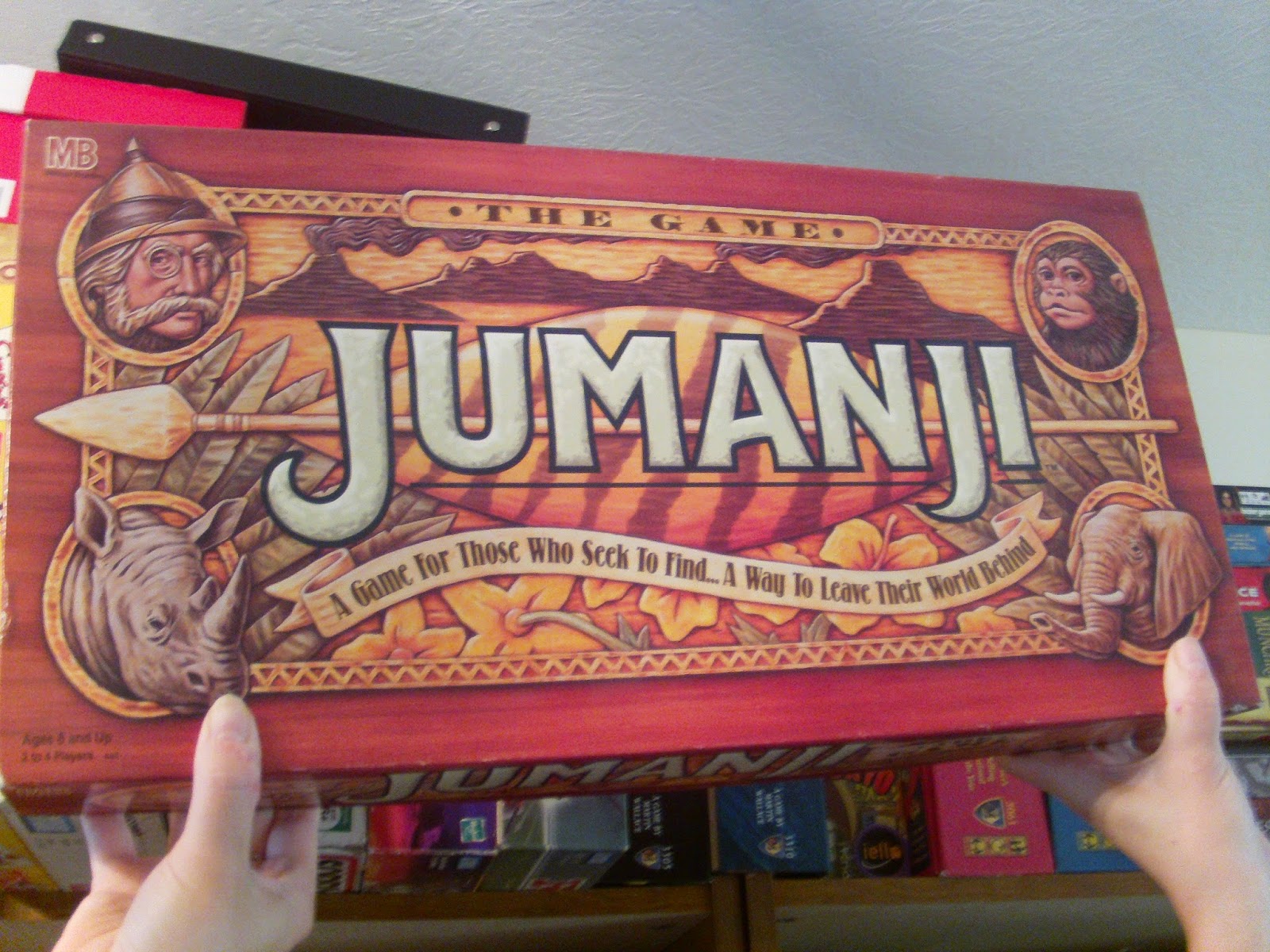 This is a new series that I will be doing from time to time. As a child of the 90’s, I had plenty of access to ridiculous board games, usually comprising of plastic parts, bright colors and something battery operated. These games gave me great joy, as I recall. Unfortunately, I had to give them up over time due to my mother’s regular “donate to Goodwill cleanouts” (to this day, the question “When was the last time you played with this?” fills me with dread). However, thanks to Ebay many of these games are available for purchase if you’re lucky enough to find them with all their pieces intact. And so, I will be tracking down the games of my childhood to play them again, but through the eyes of a seasoned gamer. Will they measure up? Who can say? Oh, right… I can. In any case, the first of these artifacts is a beautiful little movie tie-in of a game: Jumanji.
A 15 second commercial with only 2 of them showing the actual product? Yeah, it’s the 90’s alright…
Jumanji, as I’m sure most of you are aware, was a movie starring Robin Williams about a jungle themed board game that single handedly (if it had hands) terrorizes a small New Hampshire town. As each player rolls the dice and their piece moves along a track of spaces on the board, horrible jungle creatures come out of the game and the only way to stop the madness is for someone to finish the game. As you can imagine, the version of this game produced by Milton Bradley in 1995 tries to capture the same frantic madness of the film.
It does this with a simple yet ingenious mechanic. Each player has an eight-sided die, with each side depicting an item. When a player lands on an empty space, they slide a card into the decoder in the center of the board. The card then gives them a charming poem about the danger they are about to face, along with a matching icon from the eight sided die and a number. The other players have eight seconds to either roll this icon or the hourglass icon (which functions like a wildcard). If they succeed, the players who helped the player in peril move along their track a number of spaces dictated by the card and the card is discarded. If they fail, the player in peril must move backwards that same number of spaces on the card and the card is placed in a track on the board (dubbed the Doomsday Grid). If the track is filled up, everyone loses (and according to the rules everyone mustplay the game again). There are other spaces on the board that generally make life difficult for the players (such as one that places a rhino in front of a player that can only be moved by the rolling of an even number, or a space that causes a player to move backwards every time they roll something other than a five or eight) but the majority of this game is players frantically rolling dice to solve the problem at hand.
And this is I think what makes Jumanji so unique for its time. Is it a traditional roll-and-move game ala Chutes and Ladders? Yes. However, the use of this mechanic of rolling dice to deal with a problem brings it closer to some more modern games like Escape: The Curse of The Temple (albeit in a much simpler fashion). By adding in this mechanic, players are given some sense of agency over the situation, and what’s more, their actions directly affect the other players (something that even some of our more recent games have trouble grasping).
I can honestly say that I had fun playing Jumanji, and not purely because of a sense of nostalgia. Playing this game as an adult, with other adults, brings out a sense of terror, excitement, dread and joy in one sitting. Watching fully grown adults leaning over the decoder to read out a snatch of poetry, or cheering as they finally roll an open door symbol as the last second of sand drains away in the timer, or groaning as another card is added to the Doomsday Grid, all make Jumanji a memorable evening.
Whether you remember the film when it came out, rediscovered it on Netflix after the passing of Robin Williams, or even have never seen the film at all- if you get a chance to play this gem of the jungle, seize it. You may get transported back to the 90’s, or maybe to the deepest, darkest jungle, or just maybe you’ll have a fantastic half-hour with some friends.