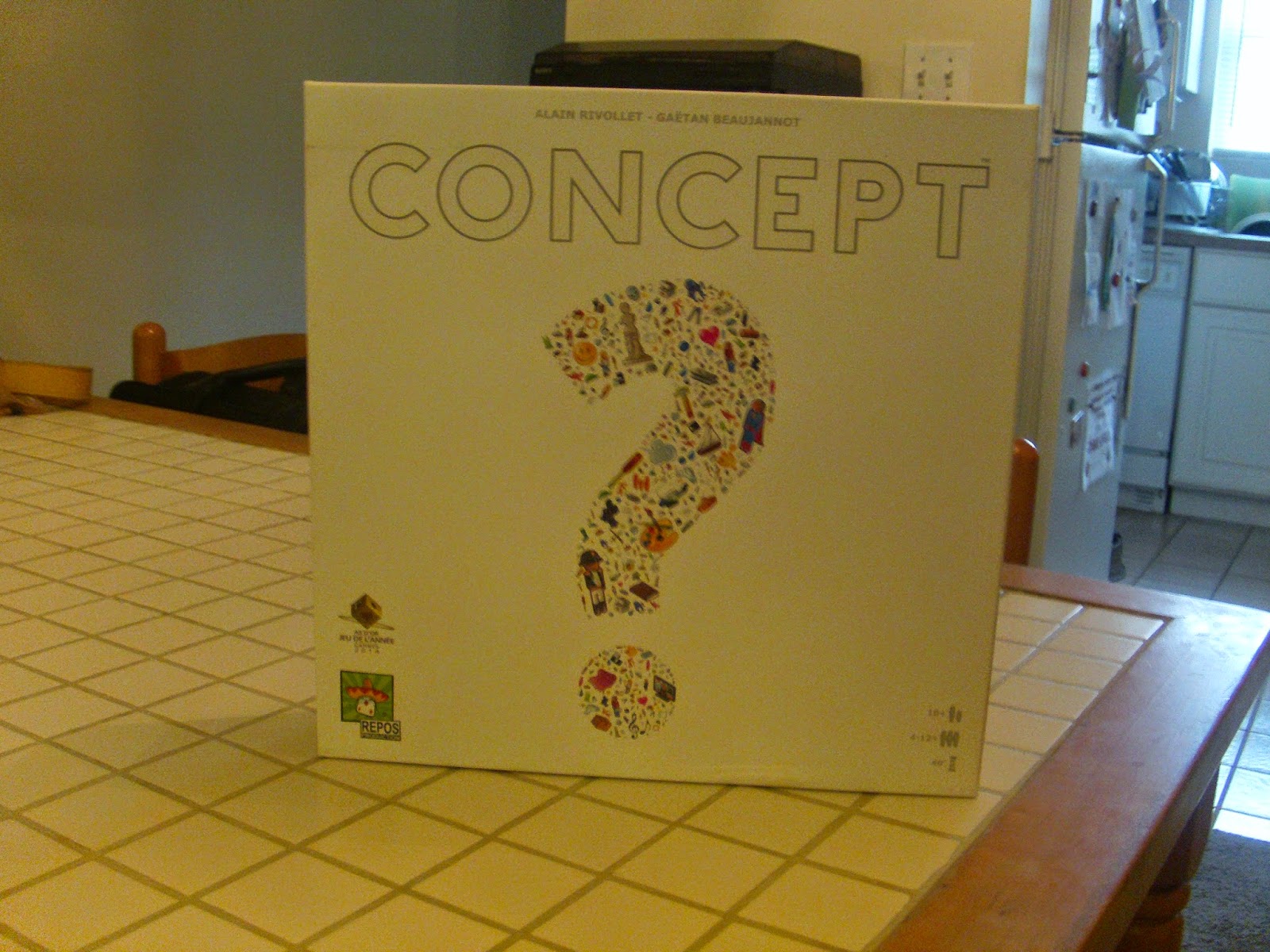 How do people think? How do they then communicate those ideas to others? What would you say is the intellectual essence, or concept, of a printer? How about a dragon? Could you sum up the concept of V for Vendetta in a single sentence?
These are all important questions posed by one game: Concept. Concept is a party game for 4–12 players by designers Gaëtan Beaujannot and Alain Rivollet and published by Repos Productions. Commonly described by critics (and some members of my household) as charades without the charades; Concept is but a skeleton of a game and more like an experience.
In Concept, you will draw a card that is separated into three colors, each signifying a degree of difficulty (blue = easy, red = hard, black = challenging) each with three words of phrases. You pick one of these options and then try to communicate your concept to the other players using a board of simple pictures. Oh, and the only word that you can say during this whole process is “yes”. If someone correctly guesses your concept, they get two victory points and you get one (as a reward for being such a great communicator). That is the entirety of the rules for Concept.
But Concept- (if I may don a beatnik beret for a moment) –Concept isn’t about rules, man. It doesn’t conform to your preconceived notions of what a game can be. This is a game only in the most bare-bones sense of the word, Daddy-o. It isn’t so much of a game as it is an experiment in the free flowing of ideas and communication, ya dig?
But to be serious, for a moment (as I toss my beret in the roaring fire of the twenty-first century) if you need in-depth strategy or intrigue and back-stabbery to have a good time, this game probably isn’t for you. But if you want to laugh so hard that you can’t breathe because your concept is “prison” and after you carefully place pieces on men, conflict, danger, inside and building your wife insists on yelling: “Nazis! It’s Nazis, isn’t it? A Nazi building!” –well, then you probably will enjoy Concept.
If I may gush for a second, this is a very well put together product, here. The design of the board and pieces are slick and a graphic designer’s euphoric dream. The rules are so simple, you can explain them in less than 30 seconds. It is clear that a lot of thought went into this minimalistic gaming experience.
In the end, Concept has just as much as you put into it. Whether or not you’ll enjoy it is ultimately up to you and your personality. Okay, I know that that isn’t the most helpful thing for a review to say, but there’s no other way to put it. Try Concept and you’ll either like it, or you won’t.
Are you intrigued by the concept of Concept? If you live in the Bloomington area, you can find this game at The Game Preserve. If you don’t live in the Bloomington area, find your nearest game store and go check it out. Support local game stores!