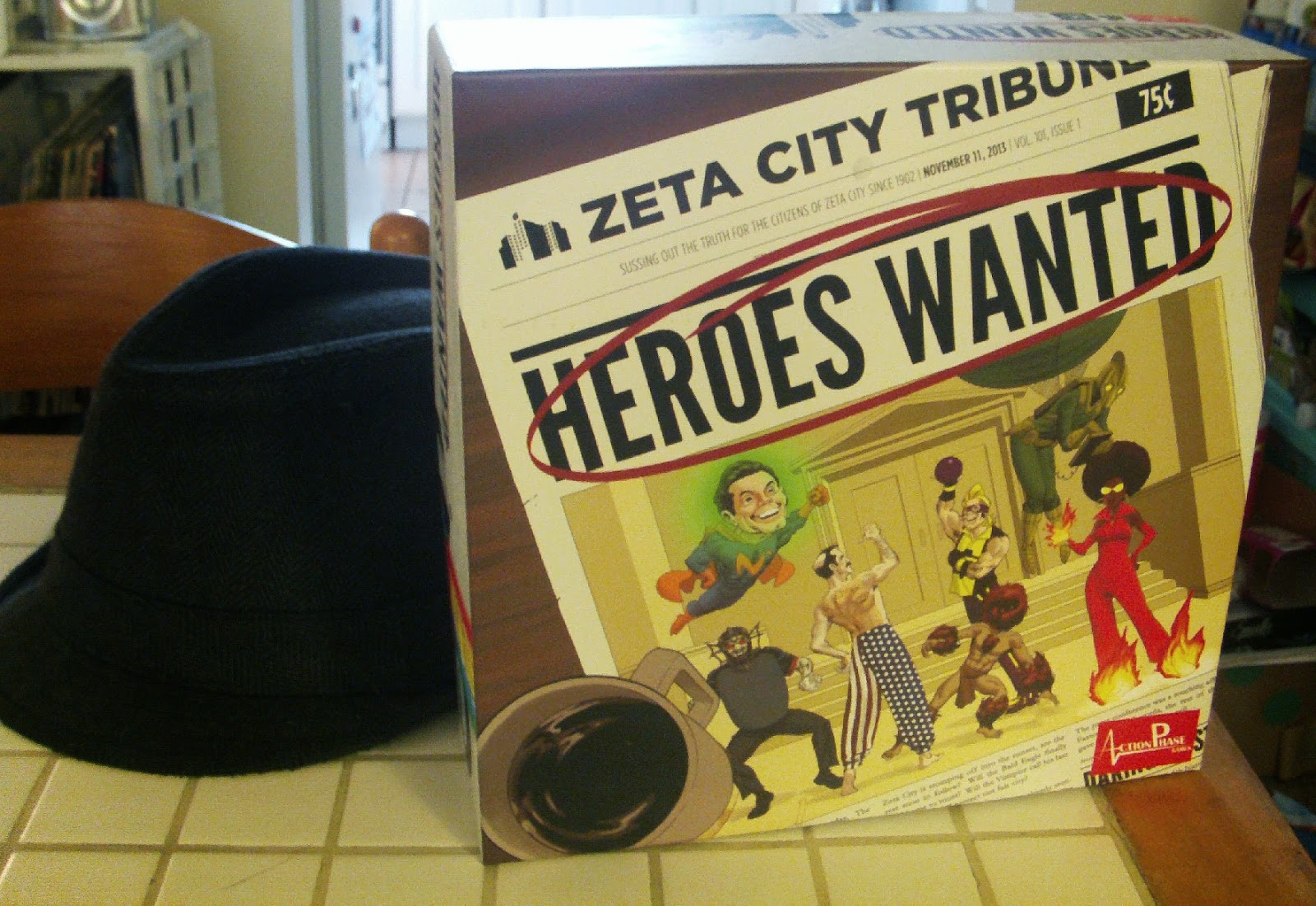 Superheroes- they’re an odd bunch, when you get right down to it. They work strange hours, they seem to get their kicks wearing spandex and they’re terrible at maintaining healthy relationships. Why would anyone actively try to be one? Quit fooling yourself- you know you want to don a mask and battle some evildoers.
Heroes Wanted is a new tactical game from Action Phase Games for 1-5 players. In it, players construct a hero and take to the streets to grab as many headlines and as much fame as possible in the hopes of joining the elite ranks of The Champions of Zeta City (your local Justice League equivalent). You will knock out minions and henchmen, take on a supervillain, and pursue fame and glory all while elbowing your competitors and tripping them up however you can.
This is ultimately a card management game. On your turn, you will play a card from your hand and do what that card says (whether that’s moving around on the board, dealing damage or activating your superpower). However, when you play the card (adding it to your discard pile) that is a card that you won’t be able to use at the end of the round to defend against damage dealt out by the villain and his minions (or other players on their turn). If you can’t successfully do this, you are injured. For every injury you take, you have to fend off +2 damage from each attack and you get -2 to your score at the end of the game. However, you can on your turn rest and instead of playing a card, place all of your discarded cards back into your hand. Does this sound confusing? It isn’t because there are only about six cards to choose from throughout the course of any game, so you’ll get used to the mechanic pretty quickly.
What really makes this game stand out are three things: style, humor and replayability. There is really solid art design at work here. All of the possible superheroes and villains look amazing, the unique wooden components are a pleasure to take off the board and the board itself is a fantastic-looking front page of a newspaper.
The strongest humorous element is in the form of a quirk assigned to each player. These are conditions that if not met when a situation arise can lose you potential points. For example, my wife’s quirk in one game was that whenever another player became the “first player” (the player who goes first each round) she had to creepily touch them and whisper her superhero’s name. A hilarious situation.
And now, replayability. This game can be played over and over again without being the same. There are two double sided boards included with each side being a different scenario that the heroes find themselves in (stopping a breakout at an asylum, thwarting a villain’s attempts at jaywalking and littering, etc). On top of this, each character is composed of two cards, the bottom half composing of an adjective (Hero Card B), the upper half a noun (Hero Card A). For example, one game you could be Danger Beard, the next, Dino Ninja. The same system is used to create the villain for each scenario. There are 32 cards each of Hero A and B cards and 18 cards each of Villain cards A and B. So that means (time for a little math-iness) that there are 1024 possible combinations for superheroes and 324 possible combinations for villains! That is a crazy amount of variety in a single box. Oh, and did I mention that each hero and villain has their own unique superpower and ability (power on card A and ability on card B) so each combination plays completely differently? Yeah, replayability out the wahzoo.
What could have been better? Well, to be honest, sometimes it feels like there is a bit too much going on. Between the quirks, assigning fame (or points), trying to thwart the villain, trying to trip up your opponent and catching players forgetting their quirk… there is a LOT of stuff to think about at one time. The result of this is that sometimes some of these elements don’t feel completely necessary. For instance, when my wife and I were fighting a littering supervillain, we went through the entire game without picking up a single piece of litter and throwing it away (which awards precious points). It’s kind of a shame that the primary theme of our scenario was not essential to completing the game.
Does this make me not want to play this game? The answer is no. As soon as a game is over, I want to put together another superhero and fight crime (and my competitors) again. What’s more, it is clear that with the right group of people, this would be a fantastic party game. The game has genuine humor, amazing art and a crazy amount of (worthwhile) replayability. It has its flaws, but it also has a spot in my collection. Definitely check this one out, guys.
Do you want to don a costume and grab some fame? If you live in the Bloomington area, you can find this game at The Game Preserve. If you don’t live in the Bloomington area, find your nearest game store and go check it out. Support local game stores!