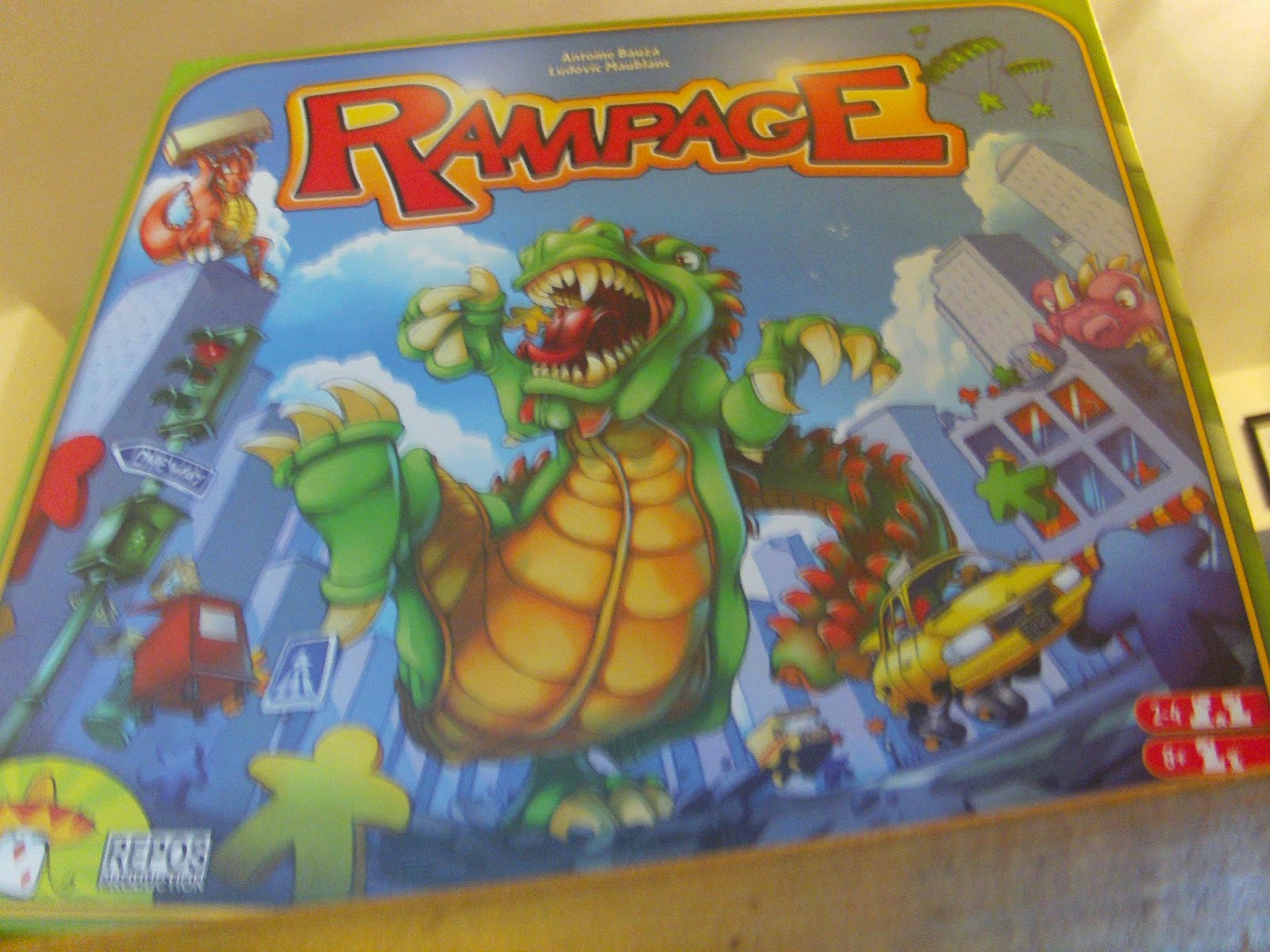 I look down at the carnage beneath my feet- at the rubble of the toppled buildings around me. People panic and flee as my shadow passes over them. I look down and see a blond woman stooping to help up an elderly man whose cane has snapped. I reach out with a massive, scaly hand and picking up the couple, pop them in my mouth joyfully like two struggling candies. I am death. I am destruction. I am about to get beaned in the head with a bus thrown by one of my fellow monsters.
Rampage is a game for 2-4 players produced by Asmodee and designed by Antoine Bauza and Ludovic Maublanc. This is a dexterity game with wonderfully chunky wooden pieces and detailed tiles of super thick card stock. In Rampage, you will be striving to earn the most points by the time that the city in front of you has been leveled. How do you get points? You eat stuff, of course! Gobble down any floors of buildings that don’t have any Meeples on them, munch on Meeples in your neighborhood and knock over your opponent’s monsters to snap off one of their teeth and swallow it, adding to the treasure trove in your gut.
Your turn is very simple. You get to perform two actions from a list of four (repeating the same one, if you wish.) First, you can move by flicking the disk depicting your feet across the board. If you go flying off the edge, you lose a tooth. Second, if your feet are touching the sidewalk surrounding a building, you may hold your monster out at arm’s length over the building and drop it, toppling floors and scattering Meeples. If you miss the building entirely, you lose a tooth. Third, if there is a vehicle in the same neighborhood as your monster, you may pick it up, place it on your monster’s head and flick it, essentially tossing this vehicle across city blocks. And finally: fourth, you may place your chin on top of your monster’s head and blow, spewing your monster’s toxic breath and blowing away any luckless Meeple caught in its blast.
However, a great mechanic that limits the chaos is this: every Meeple that gets completely knocked off the board gets placed on a track. (These Meeples have fled the city). When each line gets filled, whosoever places the final Meeple has a terrible punishment, such as losing a tooth, everyone else getting to perform an extra action on their turn, losing two teeth, etc. So you may be asking yourself, what’s the importance of teeth? Well, at the end of your turn you eat as many Meeples scattered across your neighborhood as you have teeth. Therefore, knock out an opponent’s tooth and their ability to score points is diminished. Devilish confrontation ensues.
I’m going to come right out and say this: I love this game. The mechanics are sound, it has a remarkably controlled sense of chaos and a fantastic sense of humor. Playing this game with some friends and watching them move around the table, sighting down their monster’s head like a ridiculous game of pool is an experience that comes second only to each player saying “OM-NOM-NOM-NOM” every time their monster ate something like a terrifying Cookie Monster. Some will say that the cards that give your monsters different powers and abilities can unbalance the game, but I disagree. Many of these cards determine a player’s strategy and therefore lend a certain replayability to the game. Furthermore, experienced players can look at each other’s powers and try to figure out a way to counteract them further adding to the strategy of the game. What’s more, everything that a monster eats gets hidden behind a player screen bearing their hideous visage, so if you want to know how many points a player might have, you really need to pay attention to their turn- thus adding another element for the strategically-minded.
However, if you’re looking for a fun party game with some friends, it can do that too. If you want to just have a party with your friends, knocking down buildings and scattering Meeples- laughing when a friend’s flick sends their monster ricocheting across the board, go for it. Rampage has as much (or as little) strategy as you like. (And if you do disagree with me about the cards, no problem… just leave them in the box. There’s a solid foundation for a game here, the extra powers are really just a bonus.)
So in the end, Rampage has a great layer of dexterity-based strategy beneath a fun, party-game exterior. The components are well made and so much fun to touch and play around with. The art style is playful; the game has a great sense of humor and doesn’t take itself too seriously. So I have to say that Rampage is a must buy. Let its destructive chaos into your heart and you will have a new gem in your game collection.
Does this game sound like it might be fun? If you live in the Bloomington area, you can find it at The Game Preserve, where I was lucky enough to purchase my copy. If you don’t live in the Bloomington area, find your nearest game store and go check it out. Support local game stores!