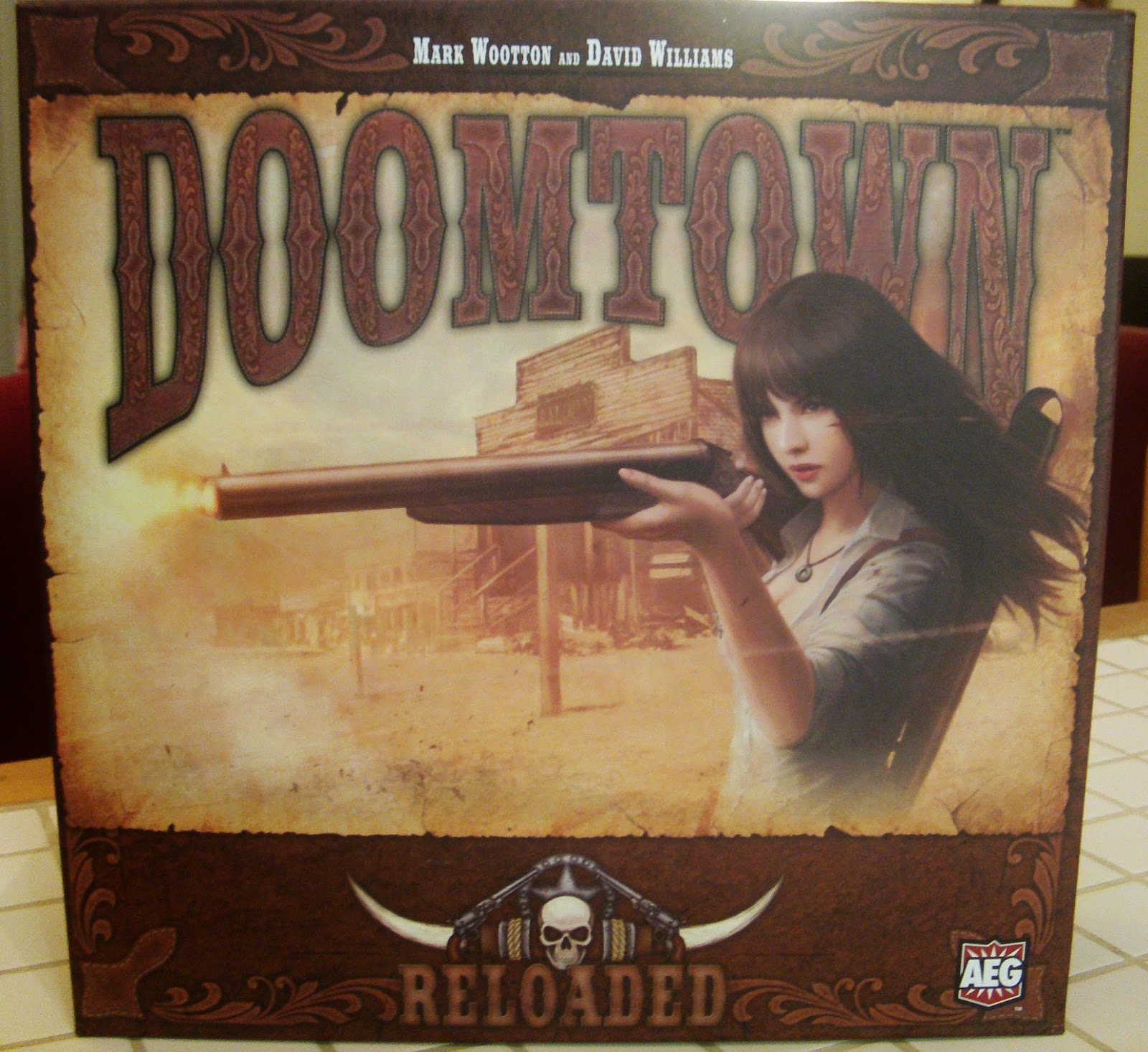 Welcome to the Wild West, ladies and gentlemen! To your left, over by the saloon, you’ll find a pard’ner handing out ten gallon hats. To your right, over by the livery stable, a rustler is distributing whiskey and regrets. Straight ahead there are six-shooters and creepy carnival curses available. Don’t make eye contact with the steampunk fanatics, it only encourages them.
Doomtown: Reloaded is a deckbuilding game for 2-4 players produced by Alderac Entertainment Group (or AEG). I should mention that this game itself is a reboot of a previous collectible card game (hence “Reloaded”). But I have not played the original version, ya varmit, so don’t ask me how they compare.
Anyway, in Doomtown: Reloaded, you’ll be commanding a faction struggling for power in a small wild-west-style town. You will be commanding the forces of either: the local lawmen (The Law Dogs), robbin’ varmits (The Sloane Gang), steampunk inspired cattle company (The Morgan Cattle Company) or creepy undead carnival (The Fourth Ring). The object of the game is to have more control than your opponent has influence. You do this by trying to control the deeds to property (both yours and your opponent’s). But what I really want to draw your attention to, pard’ner is the really interesting mechanic of this game. Each card in your deck has a suit and rank (Ace-King, Aces low). In order to determine the outcome of certain events, you and your opponent will draw five cards of the top of each of your decks and the best poker hand wins- often with disastrous consequences for the loser.
Herein lies both the strength and weakness of Doomtown: Reloaded- the stakes are incredibly high. The consequences of losing a confrontation with your opponent can be devastating- so much so that they can often discourage the very confrontation that makes games like this so fun. On the other hand, the tension you’ll feel as you and your foe warily circle each other, gauging each other’s strengths and rallying as many dudes to your cause that you can afford to pay, can be quite riveting.
A warning though, little doggies- this game is not for beginner gamers. The manual is hefty (though it has pretty large print and plenty of pictures) and although the game includes a tutorial, it can be not only intimidating, but confusing to people who are new to gaming and in particular, the genre of deckbuilding. But, if you’re an old ranch hand and the sight of a thick deck of cards doesn’t send you running to them thar hills- well, then grab the bull by its horns, pard’ner.
Doomtown: Reloaded is a really original take on the deckbuilding genre. While at times ponderous and other times filled with more risk than reward, it is still a solid game with a lot to offer. I highly recommend Doomtown: Reloaded, ya’ll.
Think ya’ll have what it takes to throw down with the best of ’em? If you’re in the Bloomington area, you can find this game at The Game Preserve. If you aren’t in the Bloomington area, check it out at your local game store. Support local game stores, ya varmits!