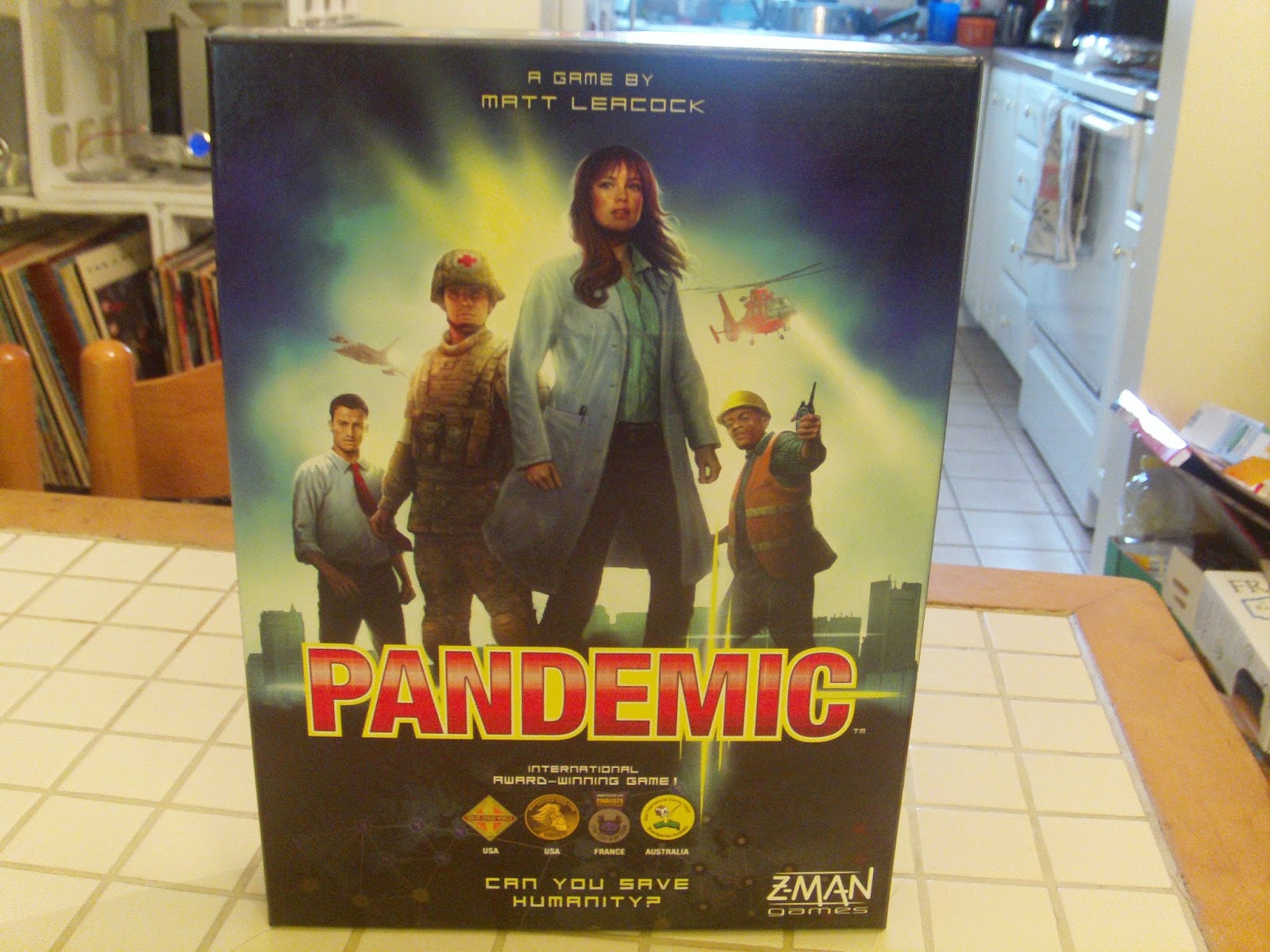 One of the greatest scourges of human history, the one thing that has killed more people than anything else, is disease. Recent events in Africa have shown that the containment and treatment of an outbreak of disease can be difficult. But what if there were four such events happening at the same time all over the world? If you were in charge, how would you deal with it? How would you coordinate the global efforts to contain such an event? Pandemic asks these questions.
Pandemic is a cooperative game for 2-4 people published in 2008 by Z-Man Games and designed by Matt Leacock. In Pandemic, you and your fellow players will take on the roles of experts in the field of disease control, working to minimize the spread of and ultimately research the cure for four diseases that are spreading around the world. In each game, you will trying to minimize the damage done by these four diseases (represented by blue, red, yellow and black cubes) on the world map that functions as the game’s board.
Each round, after taking four actions (such as moving, trading resources with other players, treating a disease in a city and removing cubes from the board, etc.) each player will draw two cards from the Player Deck. Then, a certain amount of cards in the Infection Deck (as dictated by the Infection Rate) will be flipped over, with a new disease cube added to the city shown on each card. As I’m sure you can imagine, this means that the longer you take in this game, the more cubes will be added.
But there are a few things working against you. First, there are only ever allowed to be a maximum of three cubes of the same color in a city. If something would cause you to add a fourth, instead an outbreak occurs. This means that instead, you add a cube of that color to every city connected to that one. 8 outbreaks and the game is over and everyone loses. Second, if on someone’s turn, they need to draw a card from the Player Deck and there are none left, everyone loses. What’s worse, throughout the Player Deck here are Epidemic cards. These nasty pieces of work cause three things to happen: the infection rate increases, a card is drawn off the bottom of the Infection Deck and 3 cubes are added to that city, and all the discarded Infection Cards are shuffled and put on top of the Infection Deck. This means that every city that had a cube added to it will soon have another one joining it.
So, how do you win this monster of logistics? Remember those cards in the Player Deck? Each one shows a city and its corresponding color. If a player can collect five of the same color, they can trade them in at a Research Station for a cure to that color’s disease. Research all four cures and you win the game! Furthermore, each player is assigned a role (such as Medic, Scientist, etc.) and each of these roles have special abilities, something that they can do that no one else can. What’s more, there are more of these roles than players allowed to play, so each game new roles will change your strategy as a group- an excellent addition of replayability.
Let’s get this straight: you will lose at this game. In fact, the first two or three times you play with a group, you will most likely lose. Pandemic has been designed to be a perfect engine of frustration. It will chew you up and spit you out, a mangled, crying mess. And yet, with all that said, you’ll still want to keep coming back for more. Every time you lose, you can look at the board and have a pretty good notion of where you went wrong and what you should have done instead. For me, this is the most satisfying way to lose.
Pandemic has become a staple for board games for a very good reason: thoughtful design. There isn’t a single part of this game that feels unnecessary, or tacked on at the last minute. There aren’t too many elements or mechanics to keep track of. There isn’t a heavy reliance on luck or dice rolling. There’s just you and your team, coordinating your efforts, pooling resources and working together to achieve a common goal. Pandemic is a must-buy for any game collector. You may not win, but you’ll definitely have a great time losing.
Want to travel the world, fighting back a tide of never ending disease? If you live in the Bloomington area, you can find Pandemic at The Game Preserve. If you don’t live in the Bloomington area, check it out at your local game store. Support local businesses!