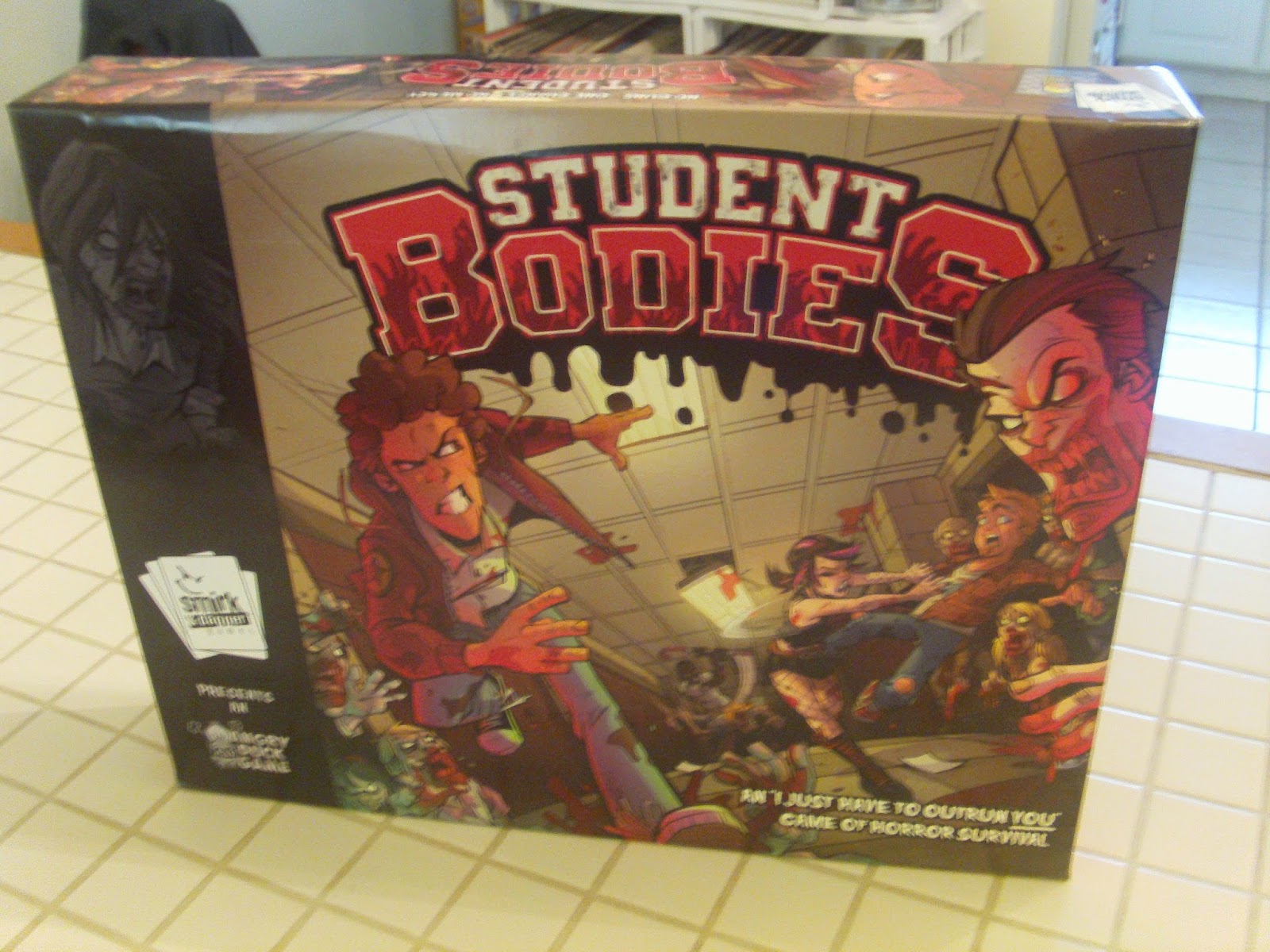 In this special time of year leading up to Halloween, you may be searching for the perfect terrifying spectacle to bring to the table of your next Game Night. In my mind (and many others) the perfect setting for spine tingling horror is none other than the local high school. With the imposing jocks just waiting to stuff you in a locker, the cafeteria ladies who glare at you as they shovel nameless glop onto your tray and the older teacher who has the unnerving ability to make you feel as if you’re the biggest waste of time he’s ever experienced- high school can be a horrifying experience for the best of us. What could possibly make things worse? Oh yeah- a zombie apocalypse coupled with the fact that you are about to die.
Student Bodies is a recently published game by Angry Duck Games LLC and Smirk & Dagger Games for 2-5 players. The plot of this game is rather simple- a zombie apocalypse has occurred and you and several other students have been bitten. Luckily, you find out that there is a convenient zombification cure in the science lab of your high school. You need to make your way through the zombie infested school, find the antidote and then escape in one piece. What makes this hard besides the swarms of zombies? Well, your fellow students turn out to be not very nice people and will constantly try to trip you up in an effort to win themselves. You’ll shove each other, trip each other up and try to put zombies in the way of your opponents- rather like real high school, actually (except for that zombie part).
On each player’s turn, they will draw a card from a zombie deck which will either add new zombies to the board, cause all the zombies present to take a certain number of actions (moving towards the nearest player, biting an adjacent player, knocking down an adjacent player, etc.) or both. While there is a set structure to when certain actions can be taken by the zombies, it is up to the current player to mainly determine what is happening with the undead horde on the board.
Once the zombies have had their turn, the current player spends stamina points to either move spaces on the board, or even play cards from their hand. That’s right- in order to do anything in this game (except move one space at a time) you will need to play a card from your hand. There are cards that are used for attacking and cards that are used for defense. This can cause some frustration during the game- but more on that later.
This is not a game of cooperation. You will constantly be trying to disrupt your opponent’s plans with a well-placed kick or shambling zombie- except of course, that player you’re trying so desperately to screw over may have a card in their hand to block that attack or (even worse) retaliate against you in the middle of your turn. What’s more, if you lose all your health before finding the antidote, you’ll become zombified- your character’s piece will be replaced by a zombie one (which will from then on be ignored by the shambling horde) and you have a new objective: make sure that no player makes it out of the school alive.
And here is the first stumbling block of Student Bodies- if you die after finding the antidote, you’re dead. So you could make it all the way through the game and die feet from the exit and your game is over. Meanwhile, the player who had a string of bad luck at the start of the game (which does happen) and died before reaching the lab, they get to keep playing. The game essentially punishes you for getting further along in the game. Thematically, it works. Mechanically, it doesn’t.
Furthermore, there are problems the moment you open the box and unpack the components. Each section of the school (entranceway, hallway and science lab) are set up according to the layout described by a randomly drawn card at the start of the game. Players start out in the hallway, which is separated from the other rooms by two cardboard door stands. You would think that each door would be labeled on both sides for the room that they represent- Fire Door and Lab 101, respectively). No, that’s not the case. Each door is labeled on one side as Fire Door and the other as Lab 101- this means that if you are sitting at a certain end of the board looking down the length of it, the doors are in the wrong place. Yes, it is a small thing to nitpick- but when you are setting up the board the first time you play and see a mistake, it instantly puts a bad taste in your mouth. 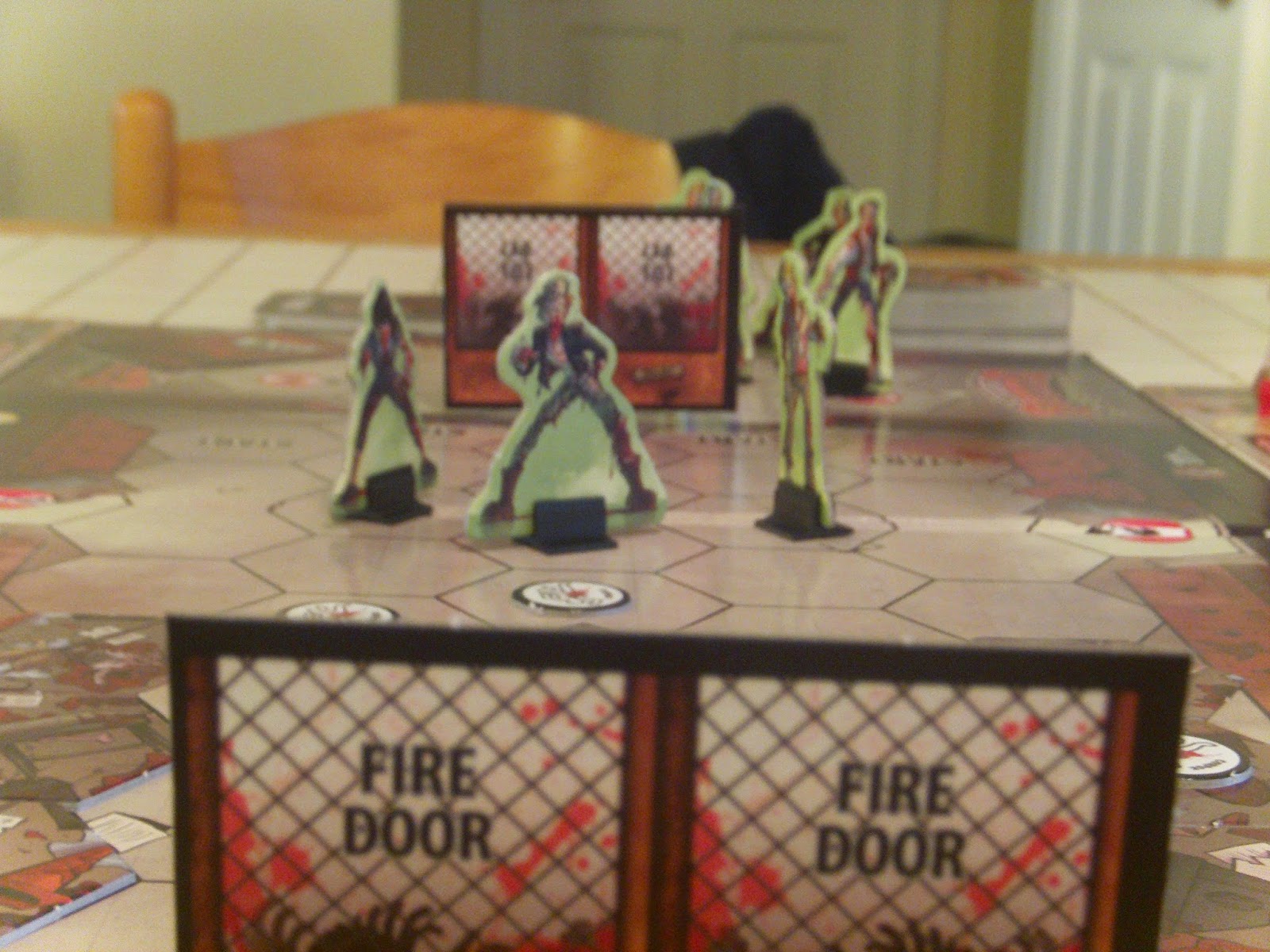 These cards add a further frustrating problem to the mix. If you are dealt cards that are entirely used for attacking or moving, you have no defense against the zombies that inevitably will attack you before your next turn. What’s just as bad is when it is your turn, but you can’t get a zombie out of your way because you don’t have any way to attack it. Since no two figures are allowed to occupy the same space, impassable bottlenecks can and will occur.
And yet, strangely enough- I found that the second half of the game is often easier than the first. You see, each player is given an item. They could be as useful as a weapon like a trophy or bicycle chain- or something relatively useless as an energy drink. If you aren’t lucky enough to receive a weapon as an item, you can try to loot a body that you find on the floor. The result of this is that either you find a random item, find nothing, or are bitten by a zombie that was pretending to be a corpse. The first half of the game, if there are no players with any weapons, guess what- no new corpses will be made, therefore no chances to find items. However, by the time of the second half, hopefully people have been able to start killing zombies in their way, leaving a trail of corpses (and possible items that may help you to kill even morezombies) in their wake- which will help you to kill more zombie- which will leave more corpse, etc. Soon, you’ll be plowing through zombies like a knife through warm cheese- taking out all the challenge of the game, just when the difficulty should be ramping up.
Student Bodies is a game that I want to enjoy. The theme is great, the art is fantastically outrageous (although, to be honest, the over sexualized depiction of the goth girl made me slightly uncomfortable- she is a teenager, after all) and the concept of screwing over your friends in a race to the finish is an exciting one. But sadly, there are many flaws in the execution. That being said, if you’re with the right group of people (namely, the type of people who don’t play to win) and you can ignore the occasional issue, there is a good game here. Again, I really wanted to like this game, but I’m afraid it will never be one of my favorites.
Want to take on the undead after study hall? If you live in the Bloomington area, you can find it at The Game Preserve. If not, check it out at your local game store. Support local game stores!