If you read my review of the X-Wing Miniatures Core set (if not, check it out here) you’ll remember that one of the things that I said about this game was that “there have been a plethora of new ships released as expansions to the base game.” Well, the time has come to take a look at these ships and let you know which ones are aces and which ones are poodoo. 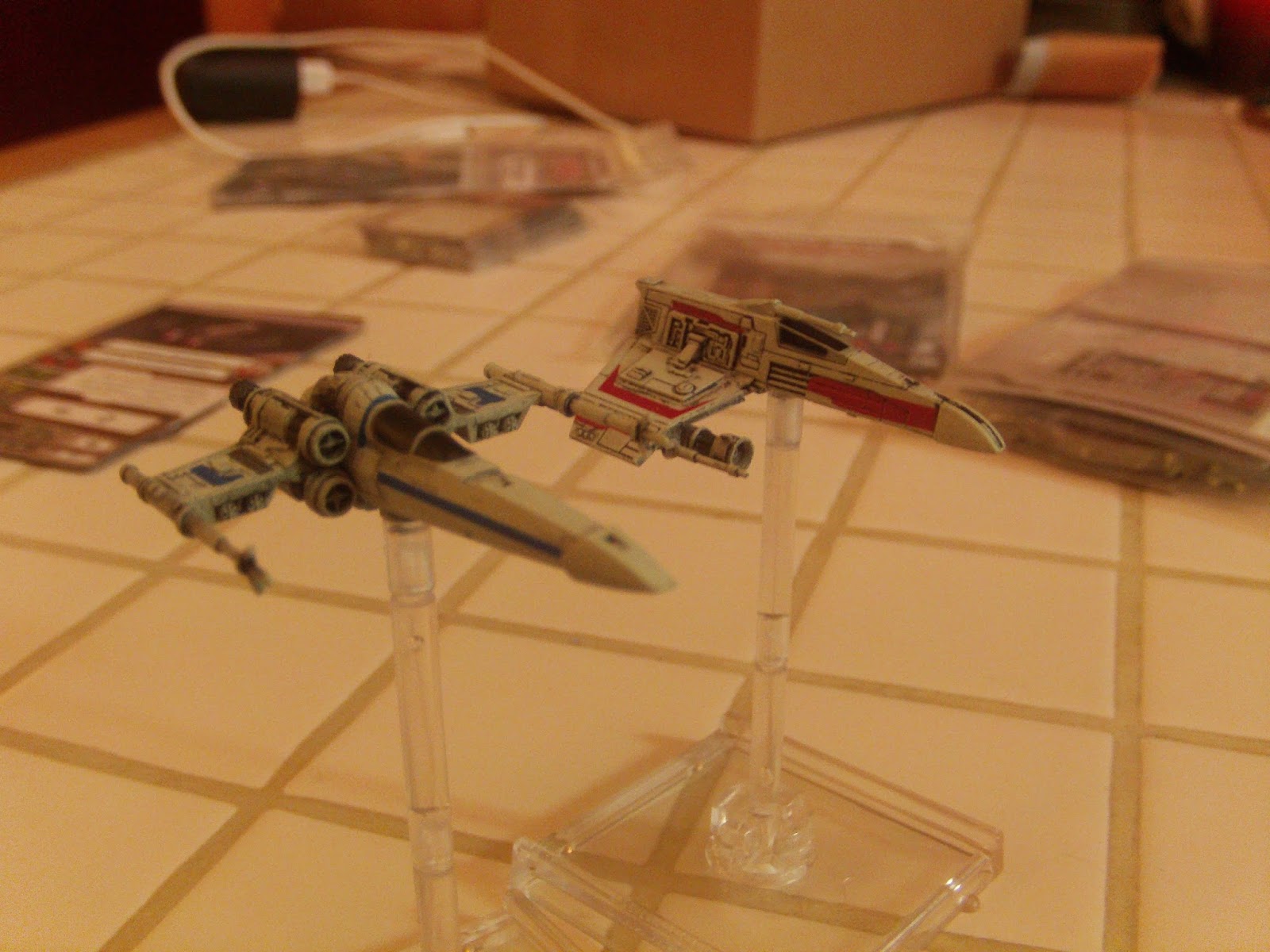 So, each Wave released so far consists of four ships, two Rebel and two Imperial. In the first part of this review I’m going to focus on the Rebel contingent of Wave 4, which consists of the E-Wing and the Z-95 Headhunter, two very different ships with very different abilities. Let’s start with the E-Wing, shall we? 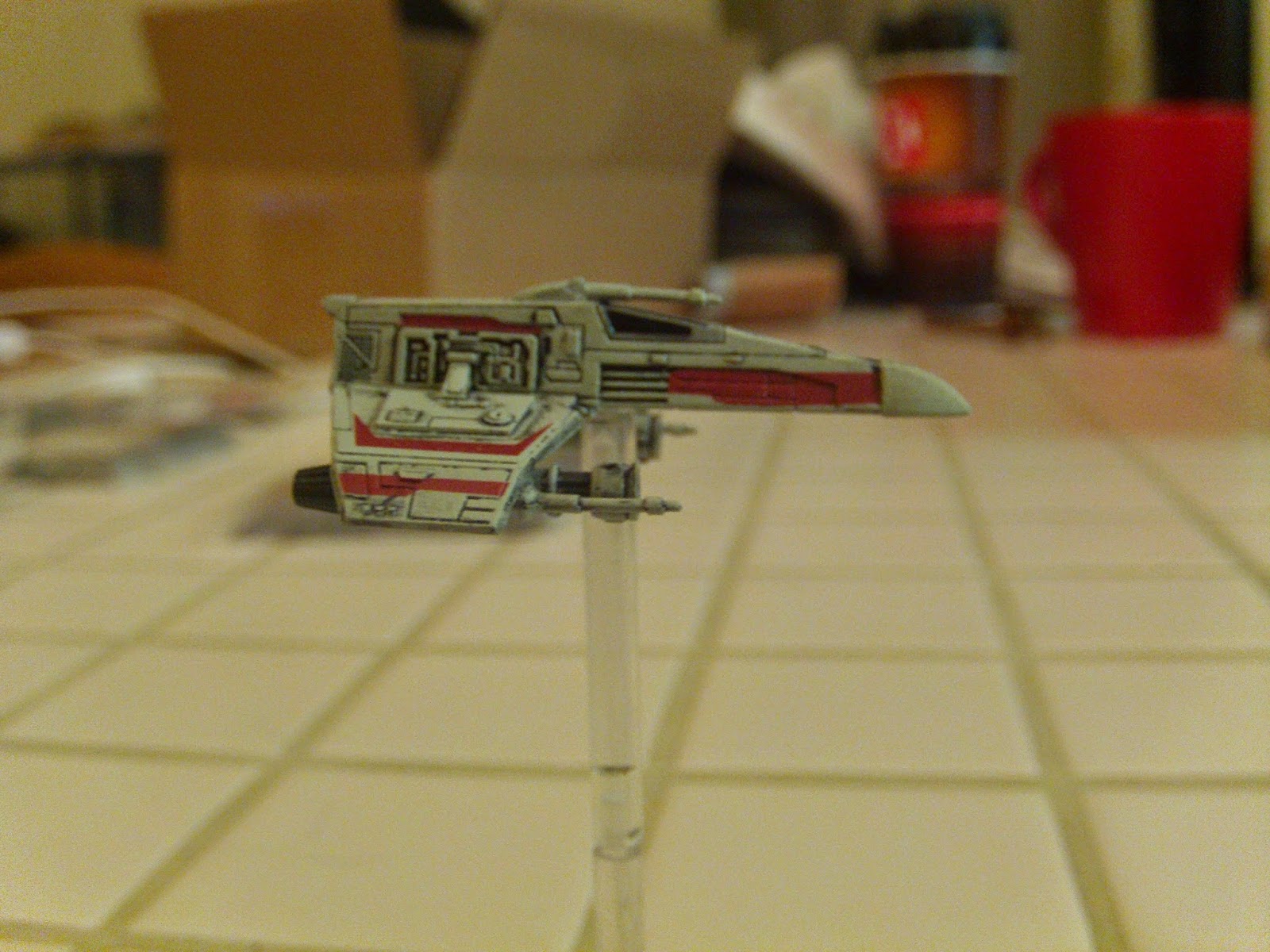 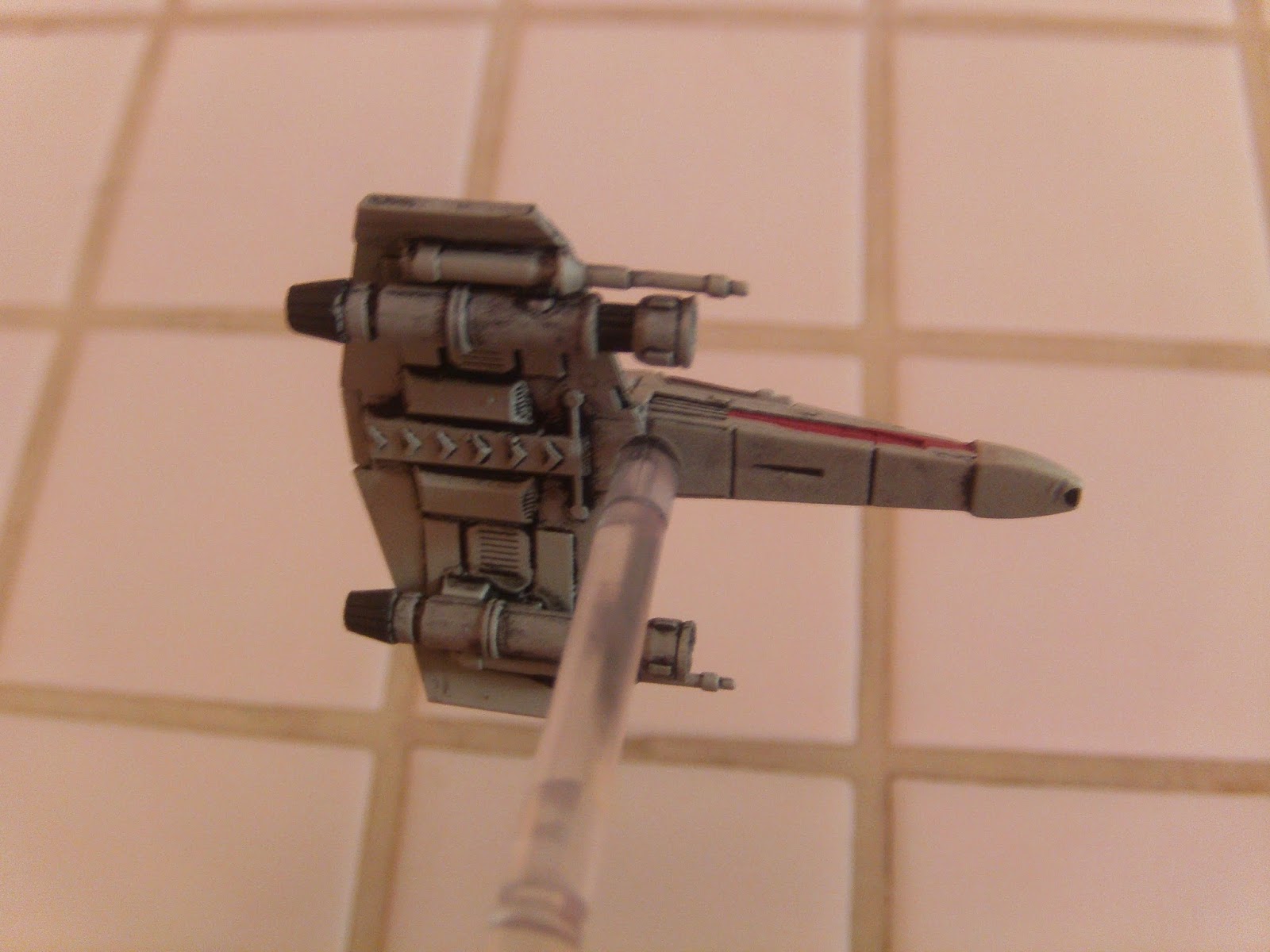 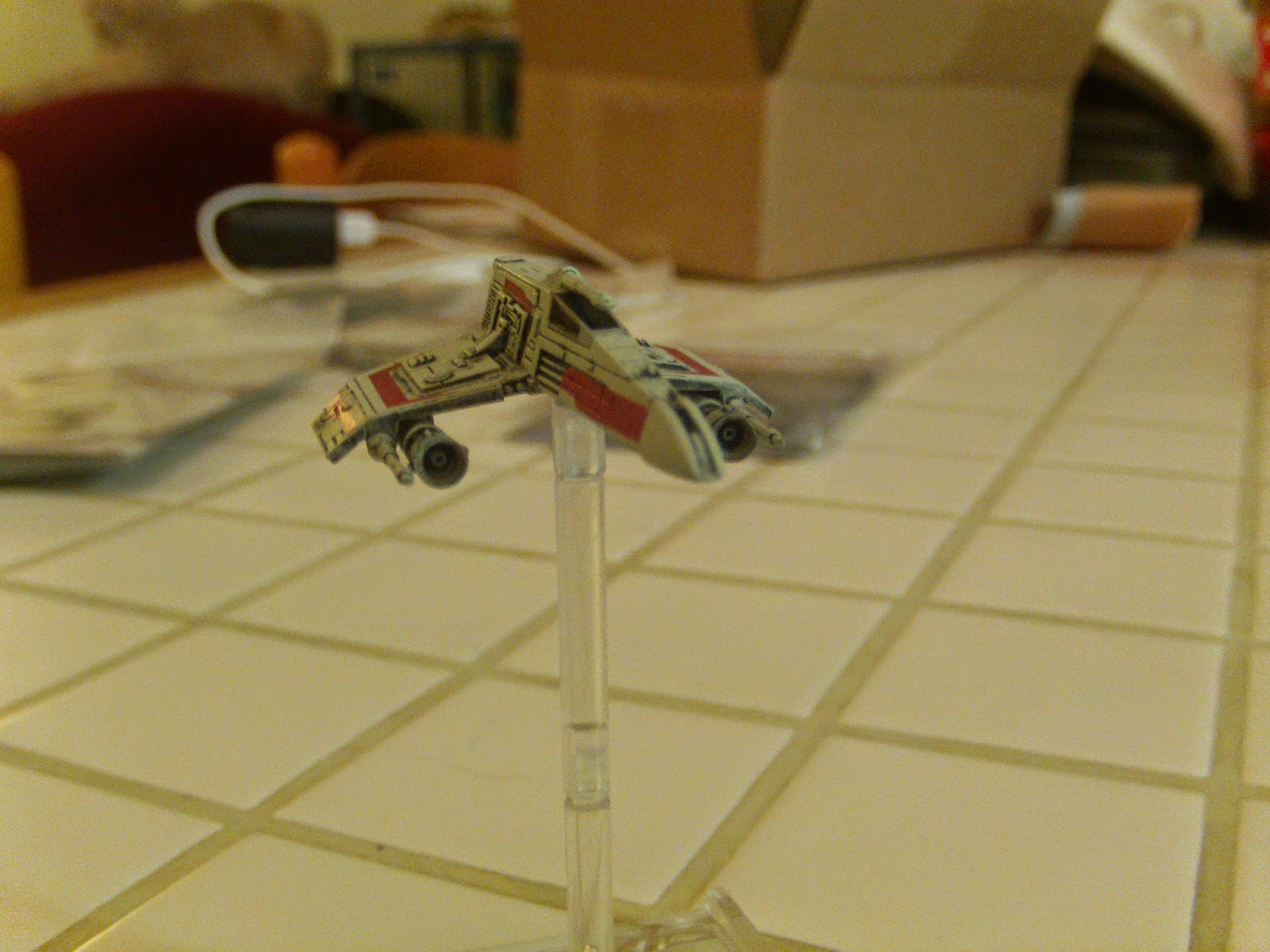 This odd-looking bird is a staple of the Expanded Universe series of Star Wars novels, during the era of the New Republic. It has pretty standard maneuverability, but also a great capability of speed (able to move straight not only at a speed of 4, but also 5- and able to execute a Koiogran Turn at speeds 3 and 4). This means that compared to your starting X-Wing, it is both faster and more maneuverable. And with not only and agility but also a shield rating of 3, this ship could be perfect for Rebel hit-and-run tactics. 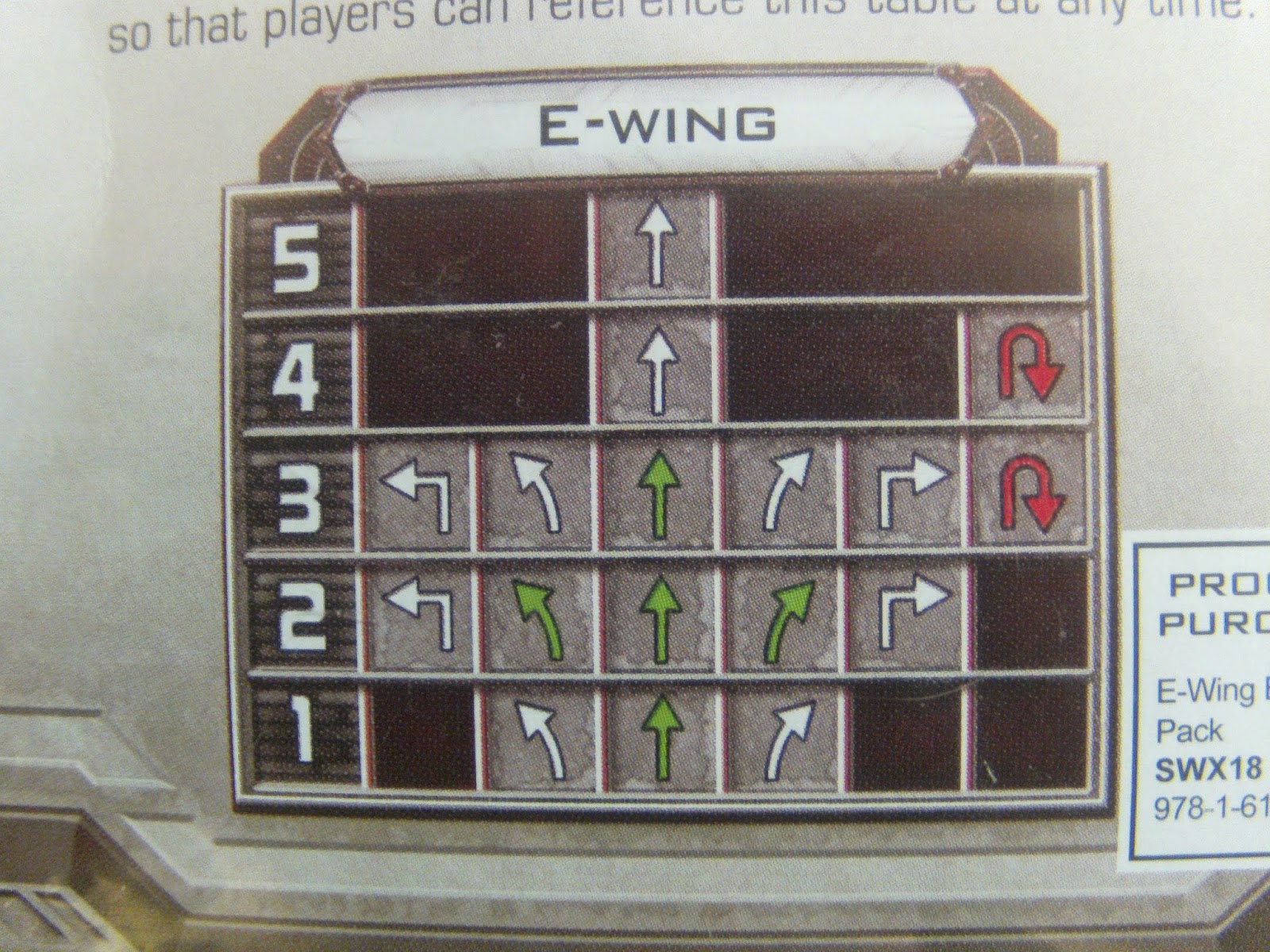 Let’s talk about pilots: there are four pilots in this expansion (including Corran Horn, a star of the Rogue Squadron series of novels) and Corran in particular has an excellent ability: At the start of the End phase, you may perform one attack. You cannot attack during the next round. This makes Corran an excellent choice if you want to suddenly surprise your opponent with a second attack, then try to get away the next turn. 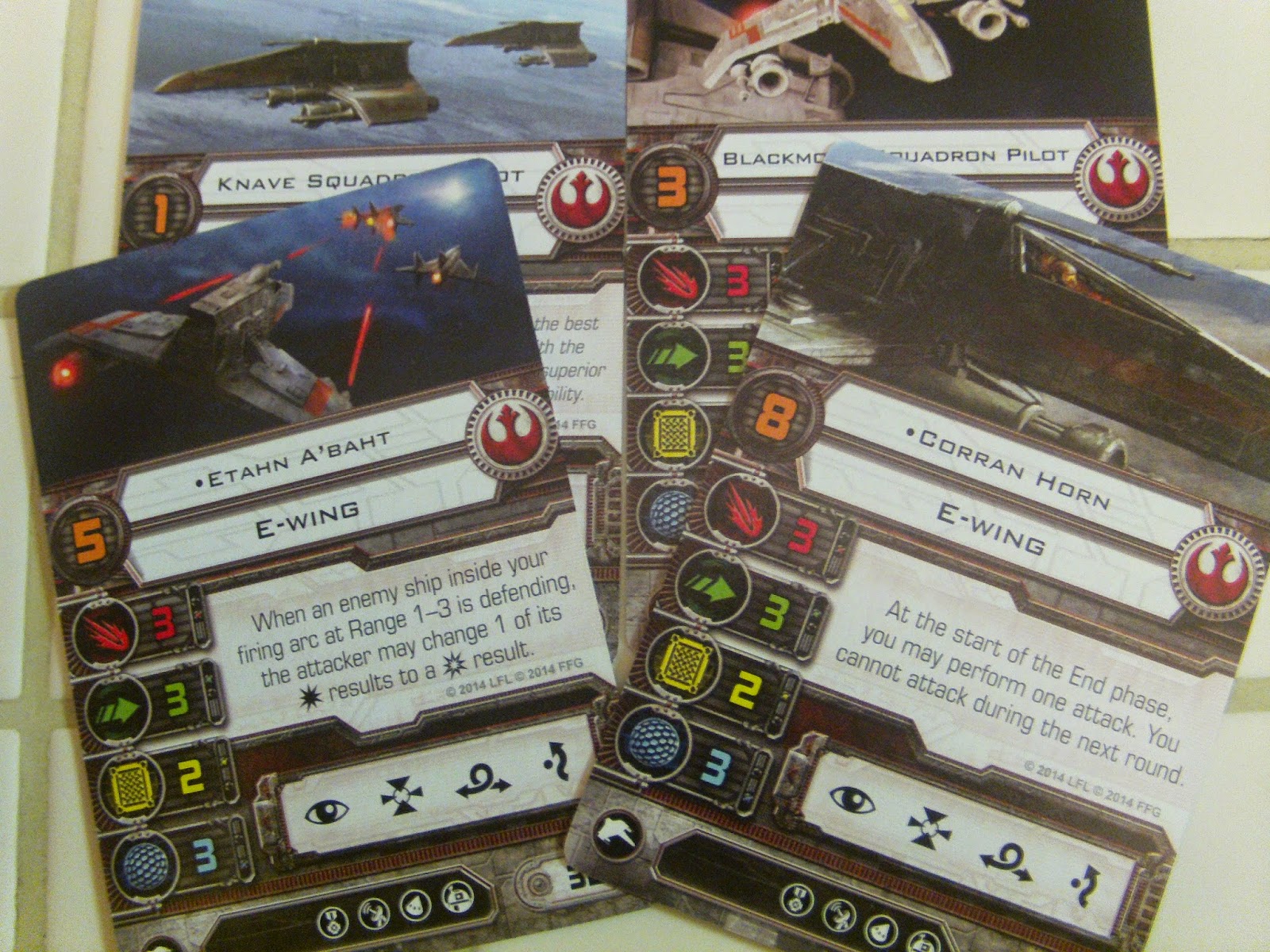 There are four upgrades that come with this ship, two astromech droids (R7 Astromech and R7-T1), one elite maneuver (Outmaneuver), one secondary weapon (Flechette Torpedoes) and one system upgrade (Advanced Sensors). Out of all the possible upgrades, R7-T1 offers the most exciting possibility: Choose an enemy ship at Range 1-2. If you are inside that ship’s firing arc, you may acquire a target lock on that ship. Then, you may perform a free boost action. This boost action can help your ship zip out of the firing arc of an enemy fighter, making it a fantastic defensive addition to the Rebellion’s efforts to evade the iron grip of the Empire’s fighters. All in all, the E-Wing is a must-have for any Rebellion fighter squadron. It can add some much needed speed and versatility to your game. Grab it when you get the chance. 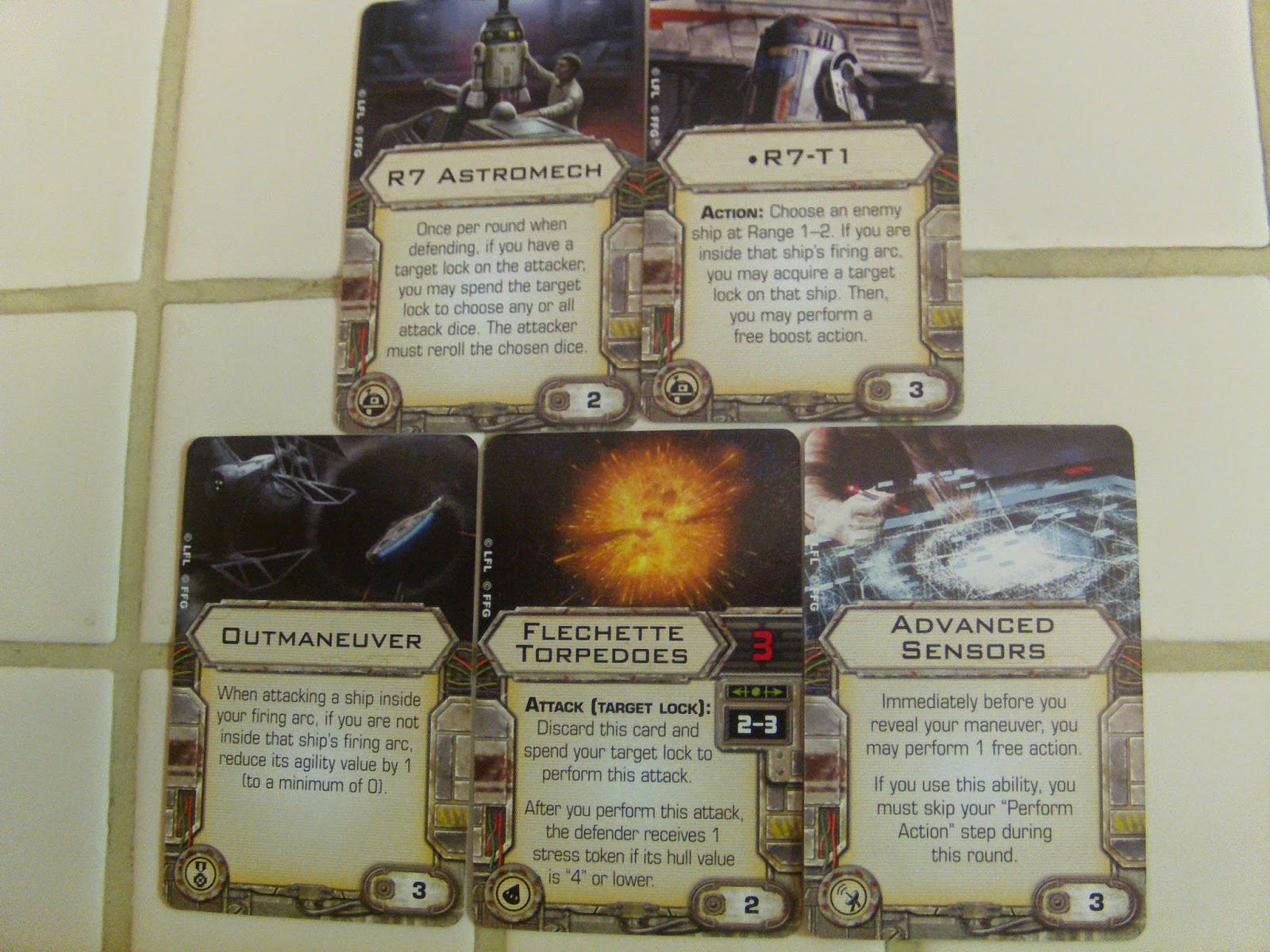 The other Rebel ship in this expansion is the Z-95 Headhunter. Let’s be honest, this ship looks like an X-Wing that’s been in an accident. However, this ship (a favorite of Rebels and smugglers alike) comes with some interesting pilot abilities and some upgrades that really can pack a wallop when used effectively. Let’s take a look, shall we? 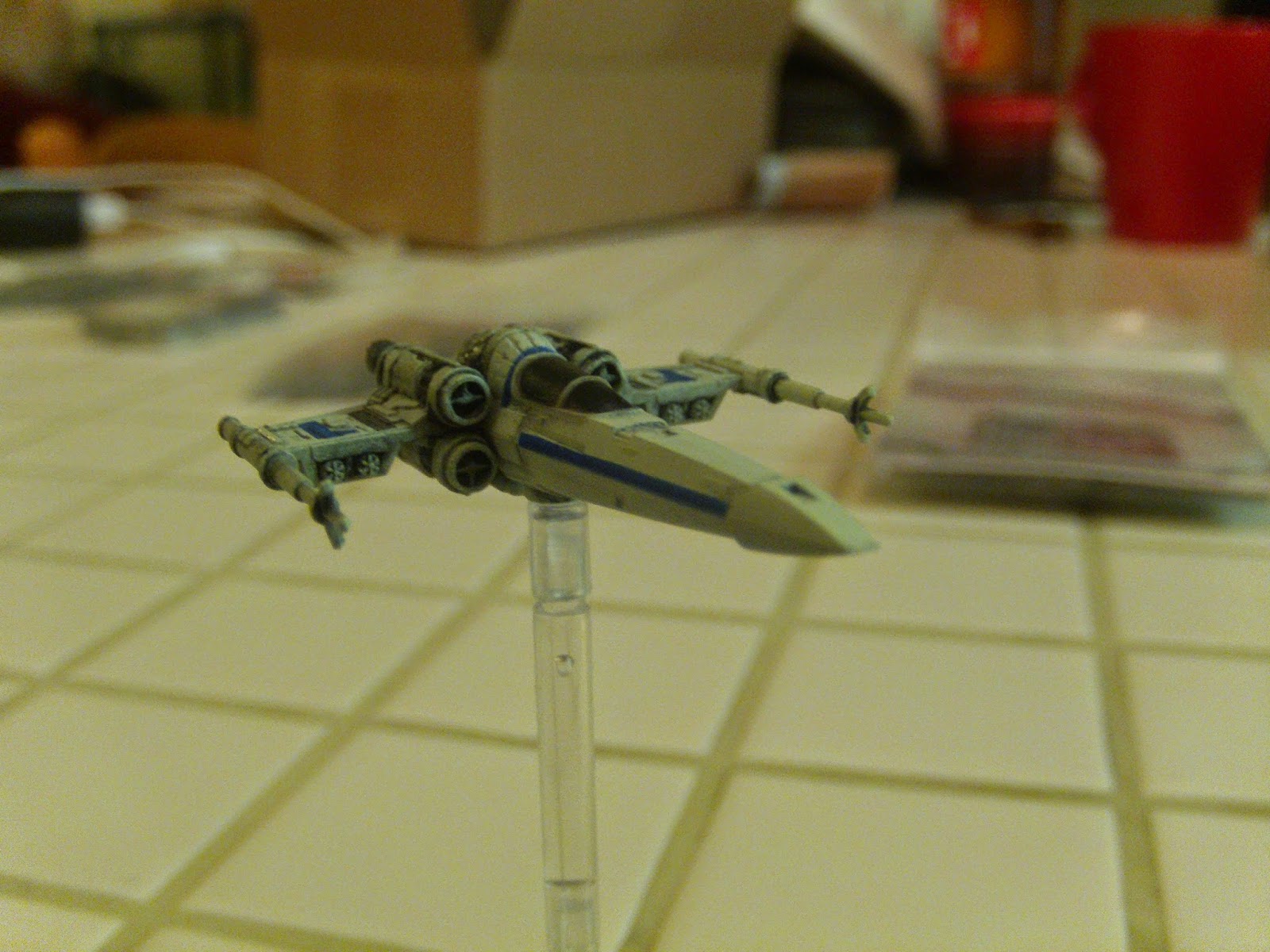 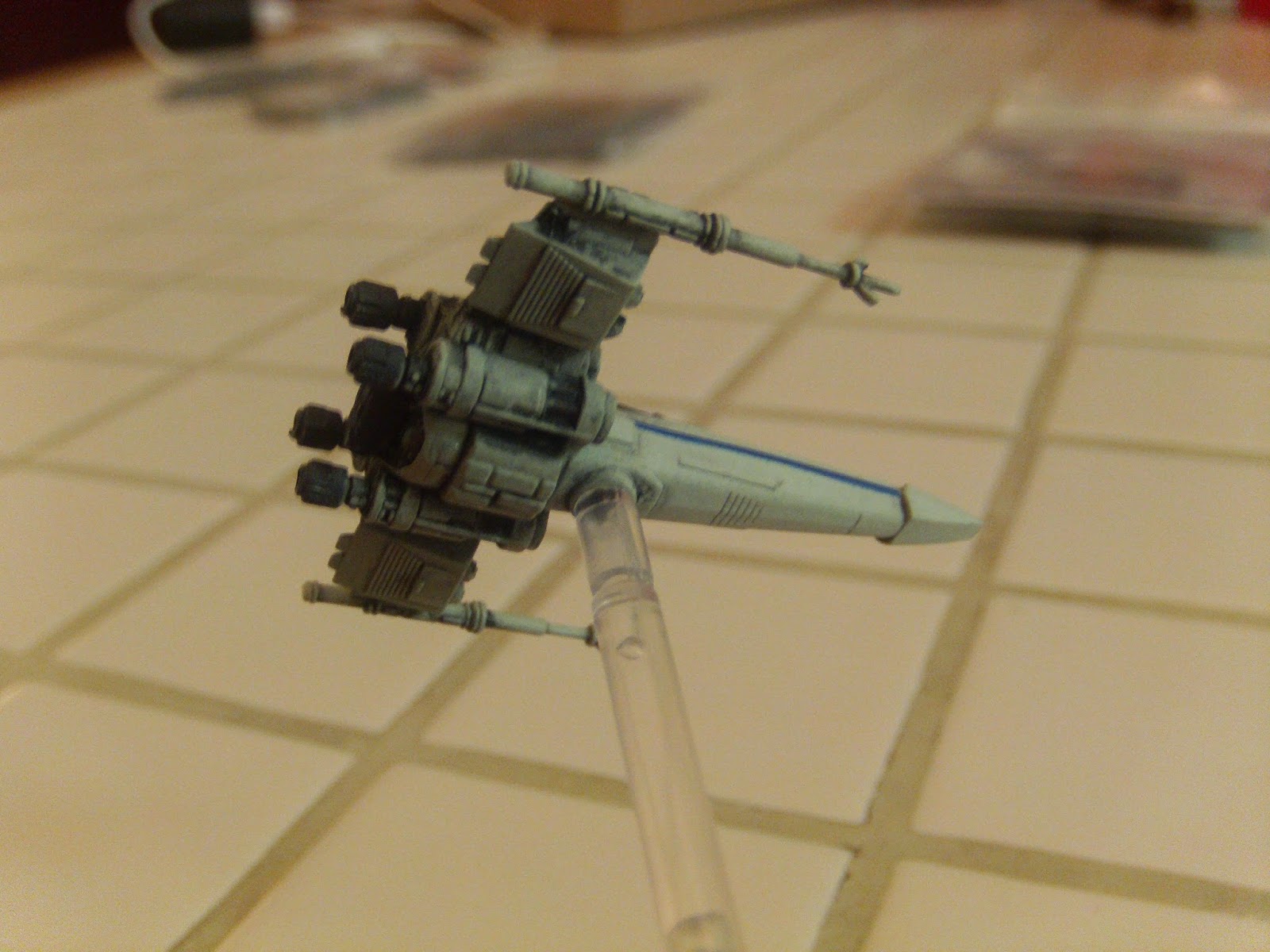 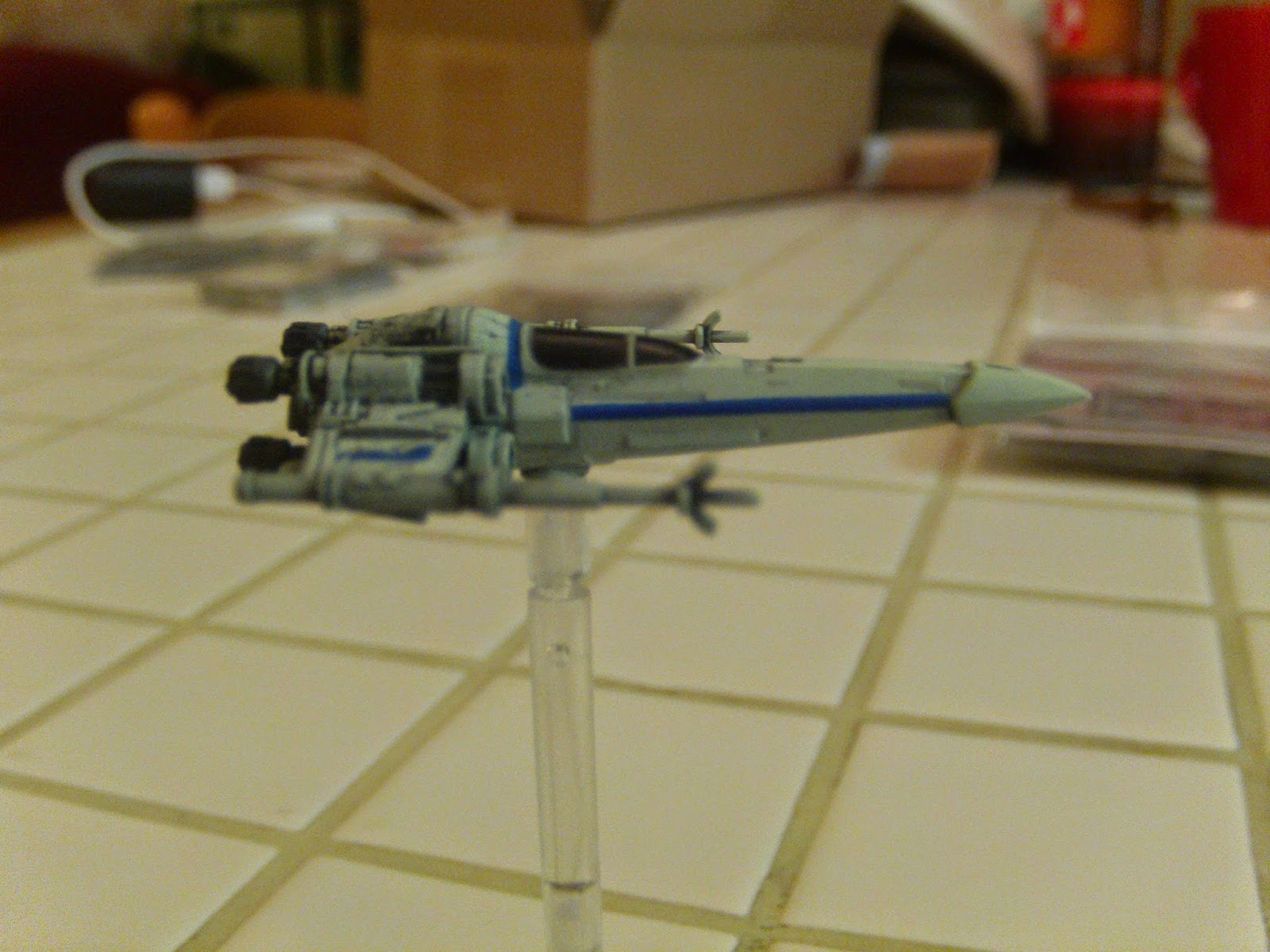 Honestly, the Z-95’s maneuvers are as similar to the X-Wing’s as its looks. The only difference is that the Z-95 Headhunter can execute a Koiogran Turn at speed 3 instead of speed 4. As far as the pilots go, the two most powerful are Lieutenant Blount and Airen Cracken, two characters that also appeared in the Rogue Squadron series (although, personally, I would have loved to have seen Mara Jade featured- the future wife of Luke Skywalker who piloted a Z-95 Headhunter in service to the Empire during the Thrawn campaign… yeah, I have geek creds). Blount has an excellent ability: When attacking, the defender is hit by your attack, even if he does not suffer any damage. This can be particularly devious when paired with some of the secondary weapons available with this expansion- more on that in a second. Cracken’s ability is: After you perform an attack, you may choose another friendly ship at Range 1. That ship may perform 1 free action. This can make Cracken especially useful as backup to your wingmates. 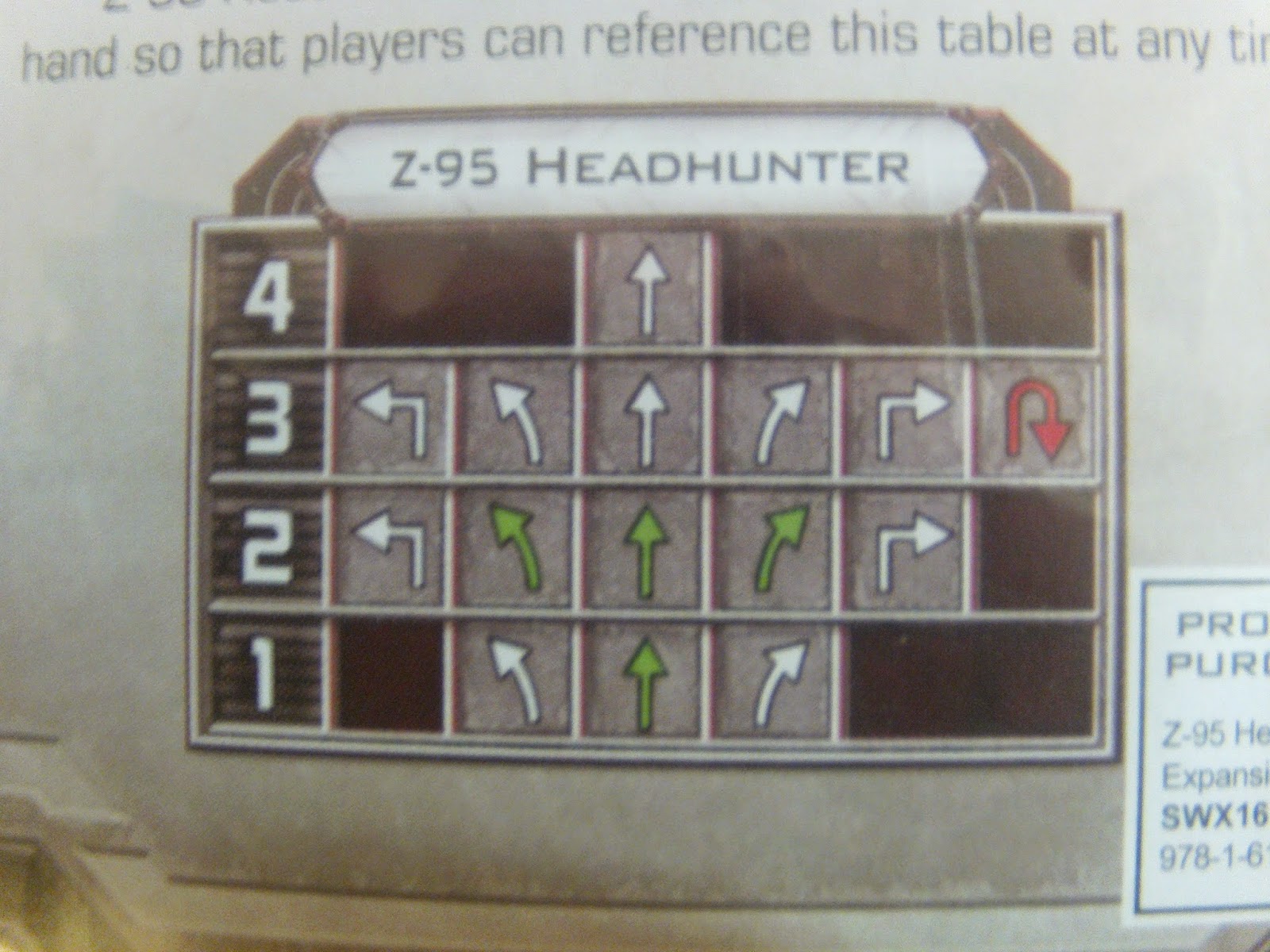 There are five upgrades that come with this expansion: 2 elite talents (Wingman and Decoy), two secondary weapons (Assault Missiles and Ion Pulse Missiles) and one modification (Munitions Failsafe). The two secondary weapons are the most exciting to me out of this group. When Assault Missiles hits an opponent, it causes one damage to every other ship at Range 1! This could be potentially catastrophic if your ships are bunched closely together. The other weapon, Ion Pulse Missiles, causes the defender to take on two ion tokens (if it hits). Ion tokens basically disable a ship, causing it to only move forward at a speed of one on the next turn, a perfect choice for those who want to make a ship a sitting duck for their wingmen to try to pick off. 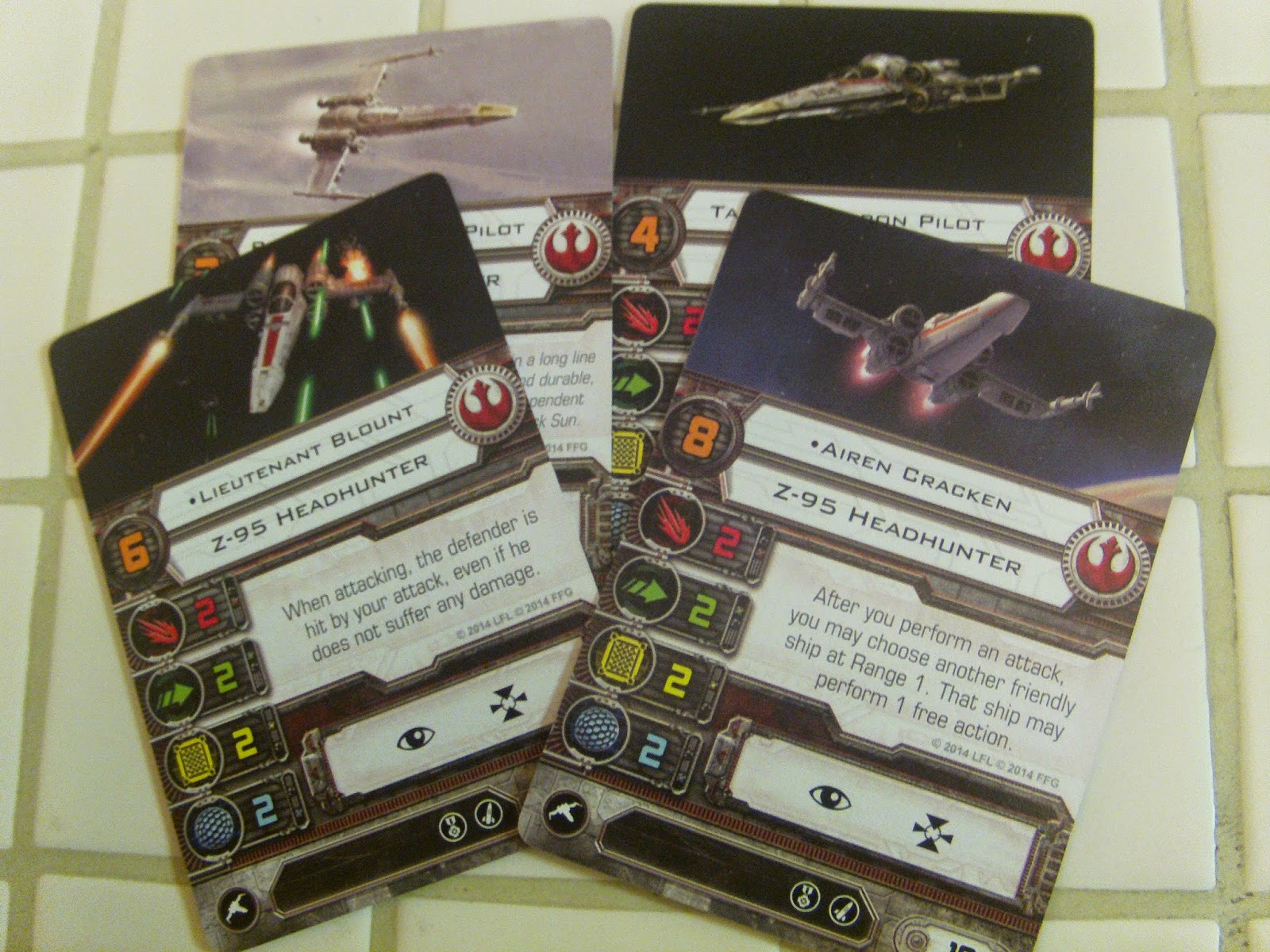 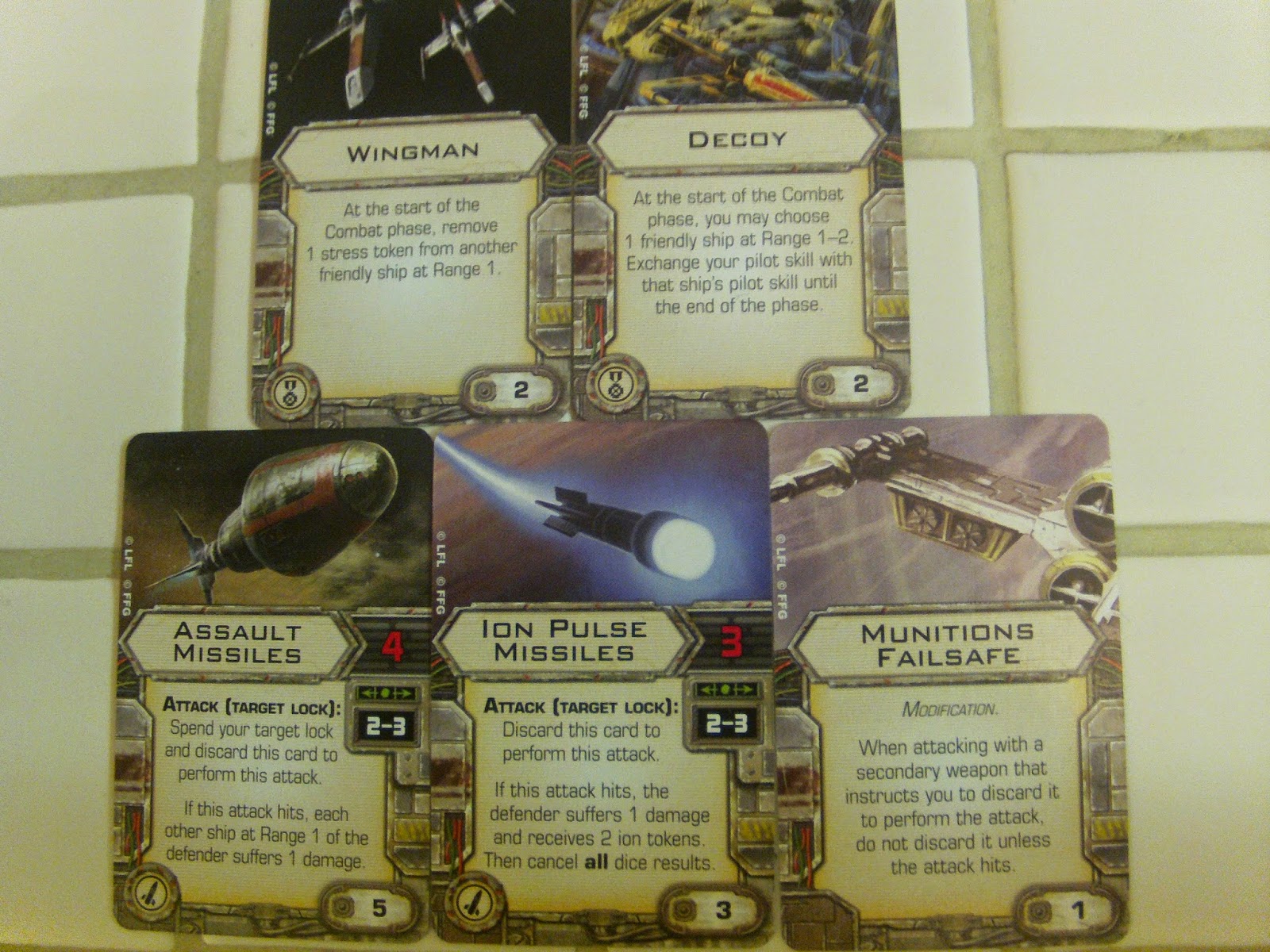 So the Z-95 may be ugly, but there’s a solid (if a little X-Wing-ish) fighter underneath there, which could be useful if you want another fighter that handles like an X-Wing, but looks a little different on your shelf and on the table. So the Rebel ships are good to go, but what about the Imperial half of this Wave? Stay tuned next week as I take a trip to the Dark Side and tell you the ins and outs of the other two fighters in this Wave. Until then, be patient, my young padawan.

Want to give these ships a try? If you live in the Bloomington area, you can find them at The Game Preserve. If not, then check them out at your local game store. Support local businesses!