Buh-buh-buh-bum-buh-buh-bum-buh-buuuuuh! That’s right, dear readers, it’s time for part 2 of our review of the Wave 4 Expansion for the X-Wing Miniatures game. If you haven’t read part 1, you can check it out here. Last time, we took a look at the Rebel ships in this Wave, so naturally it is time to turn to the Dark Side this time. There’s a lot to cover, so let’s just get right to it, shall we? 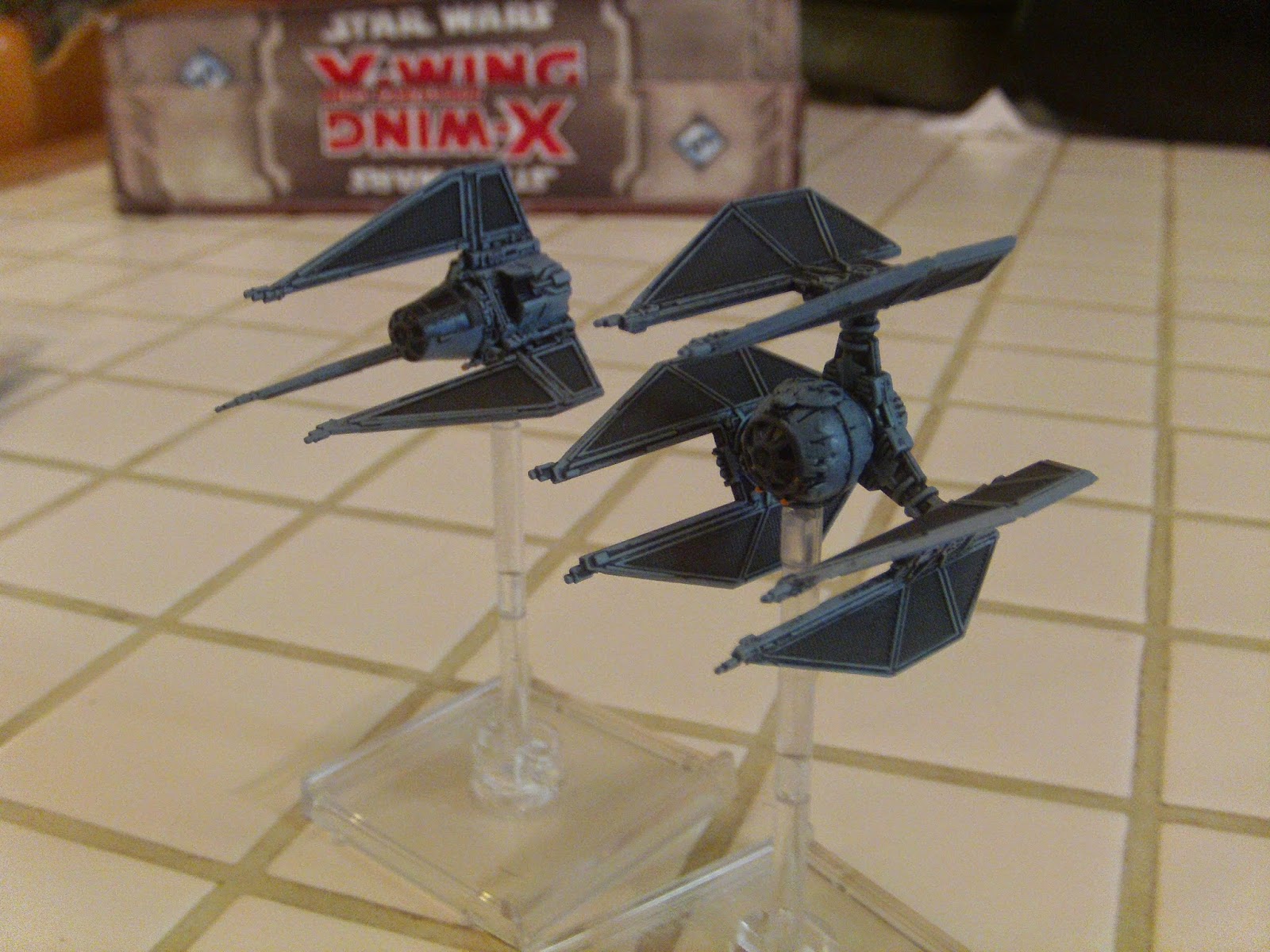 The two ships we’re going to be looking at today are the TIE Defender and the TIE Phantom, starting with the TIE Phantom. With its tri-wing design and oddly shaped cockpit, this ship will definitely turn some heads when you add it to your battle (and help it stand out from your standard TIE fighters). 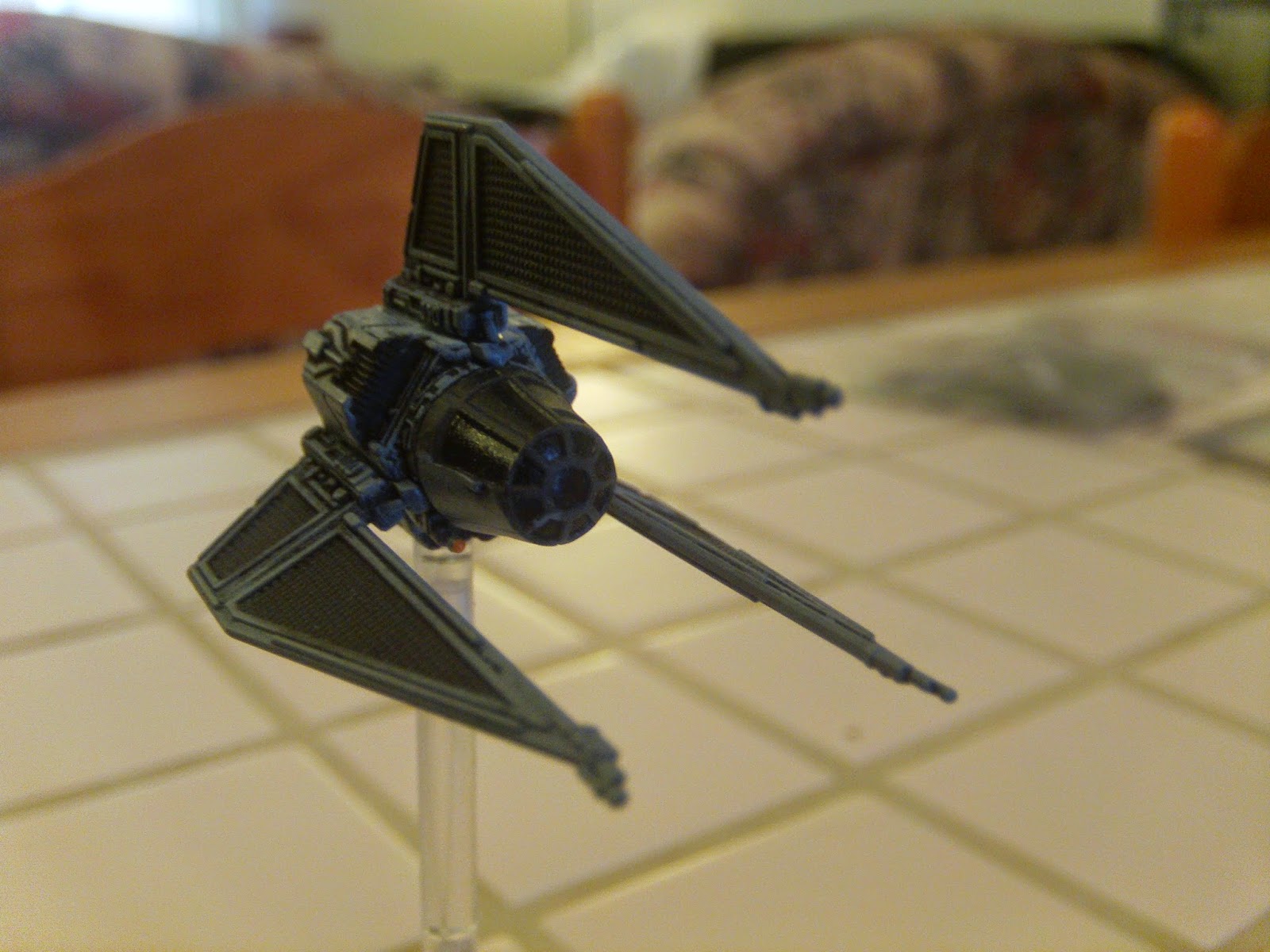 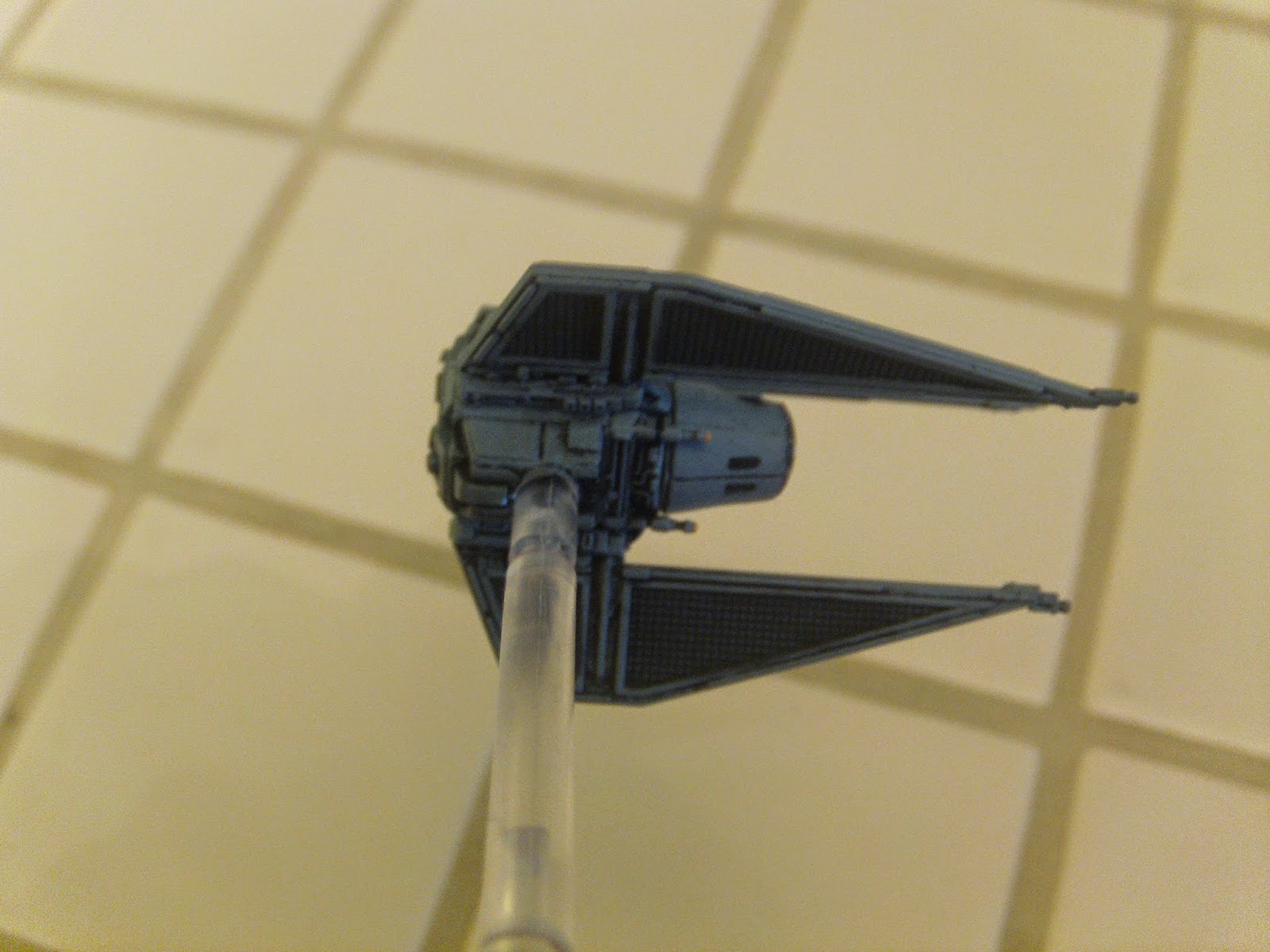 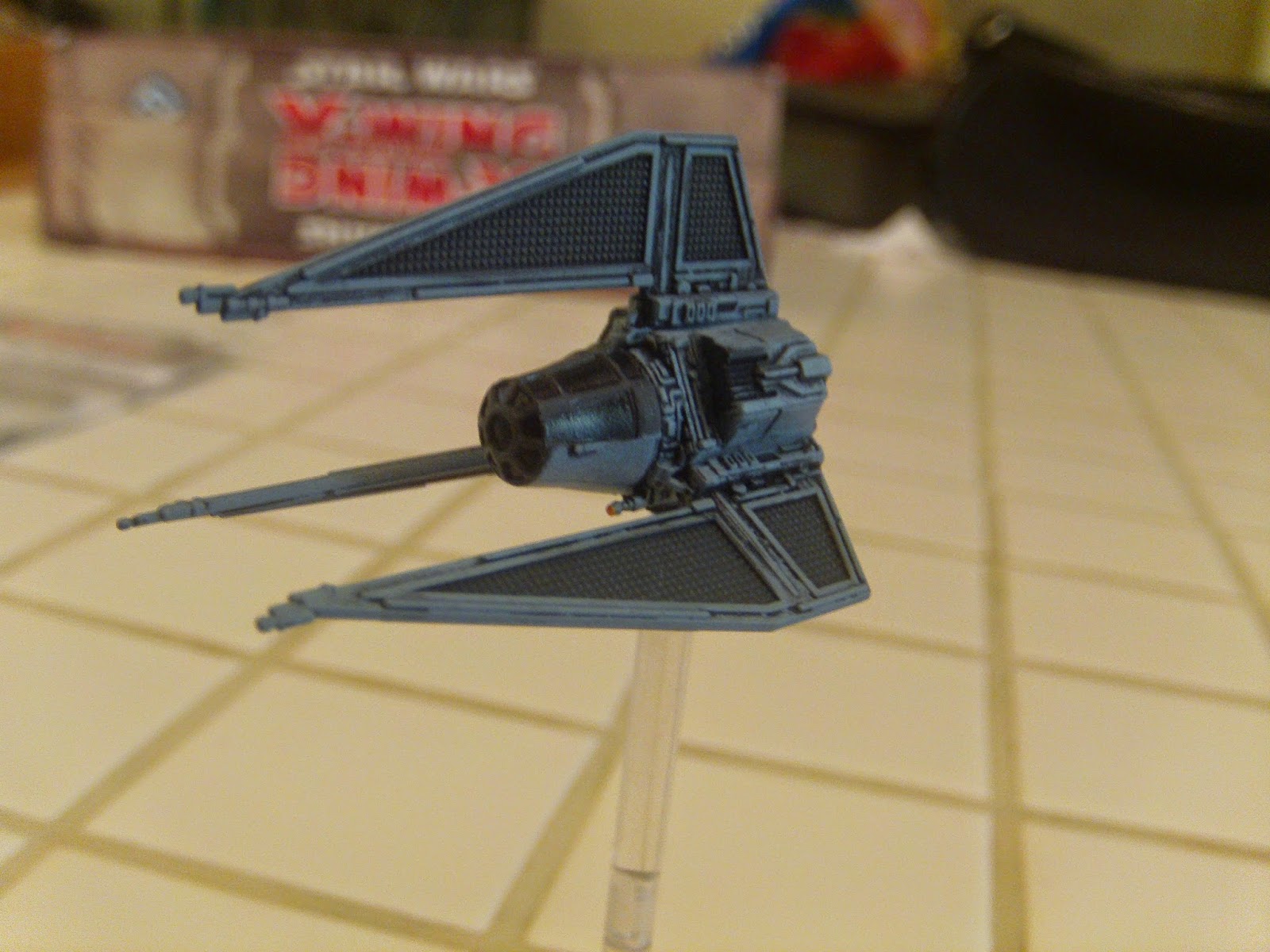 This little beauty is a complete game changer as far as tactics are concerned. The TIE Phantom has the ability to cloak, adding 2 to its ability rating, making it all but impossible to hit. The catch to this ability is that when cloaked, the Phantom cannot attack- meaning when you cloak, you’re going purely defensive. As far as maneuverability goes, the TIE Phantom is pretty standard- its top speed is 4, making it not the speediest of ships. However, it can execute a Koiogran Turn at speeds of both 3 and 4, making it a good choice when in a tight corner. 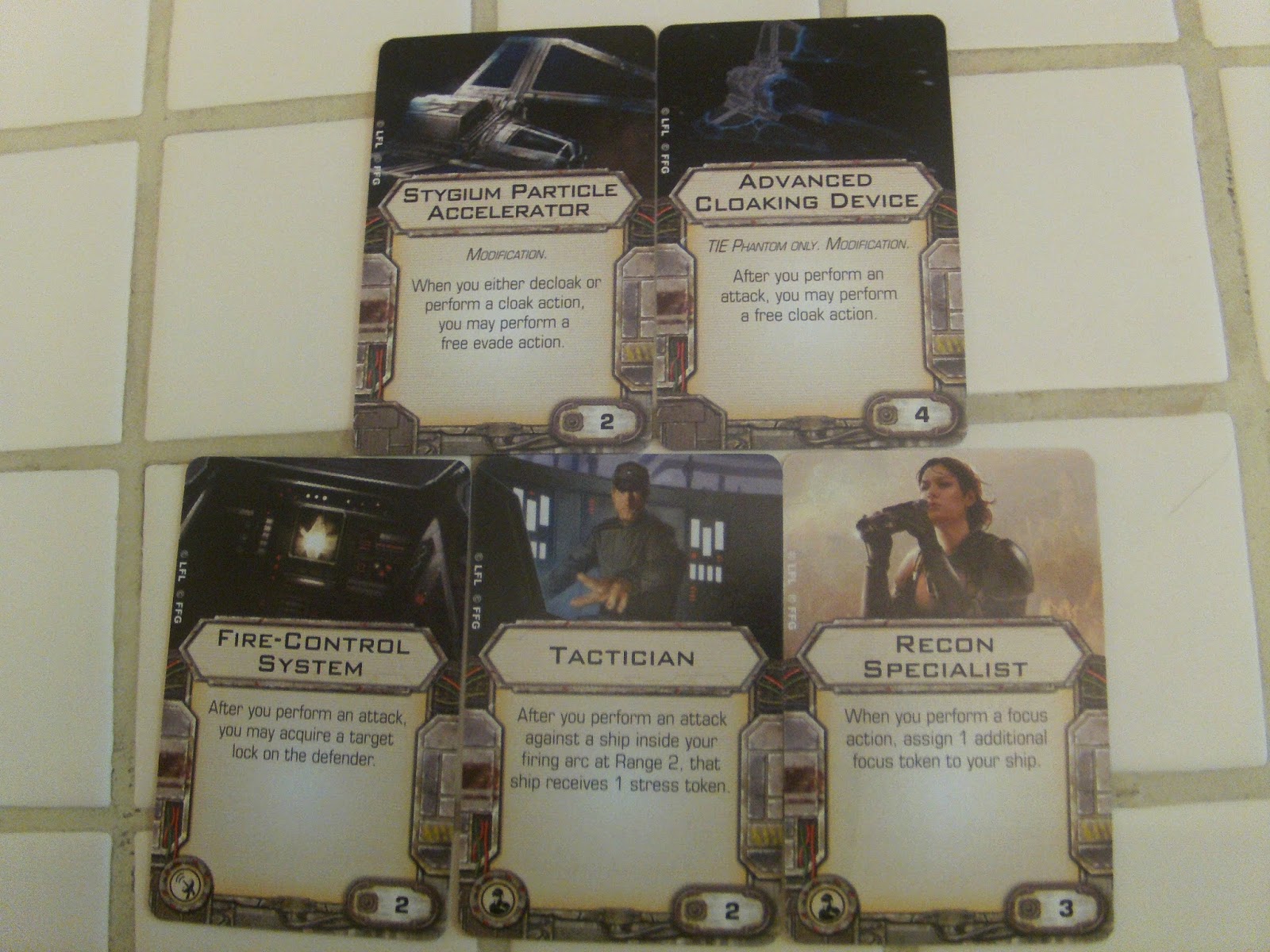 This ship comes with 5 upgrade cards: 2 modifications (Stygium Particle Accelerator and Advanced Cloaking Device), 1 systems upgrade (Fire Control System), and 2 crew members (Tactician and Recon Specialist). While the two modifications are particularly useful to use with the Phantom (as they both have to do with its cloaking ability) the Tactician’s ability is rather exciting: After you perform an attack against a ship inside your firing arc at Range 2, that ship receives 1 stress token. This means that the Phantom can easily terrify your opponent’s pilots, limiting their options and maneuverability- a fun little wrench to throw into their finely tuned war machine. 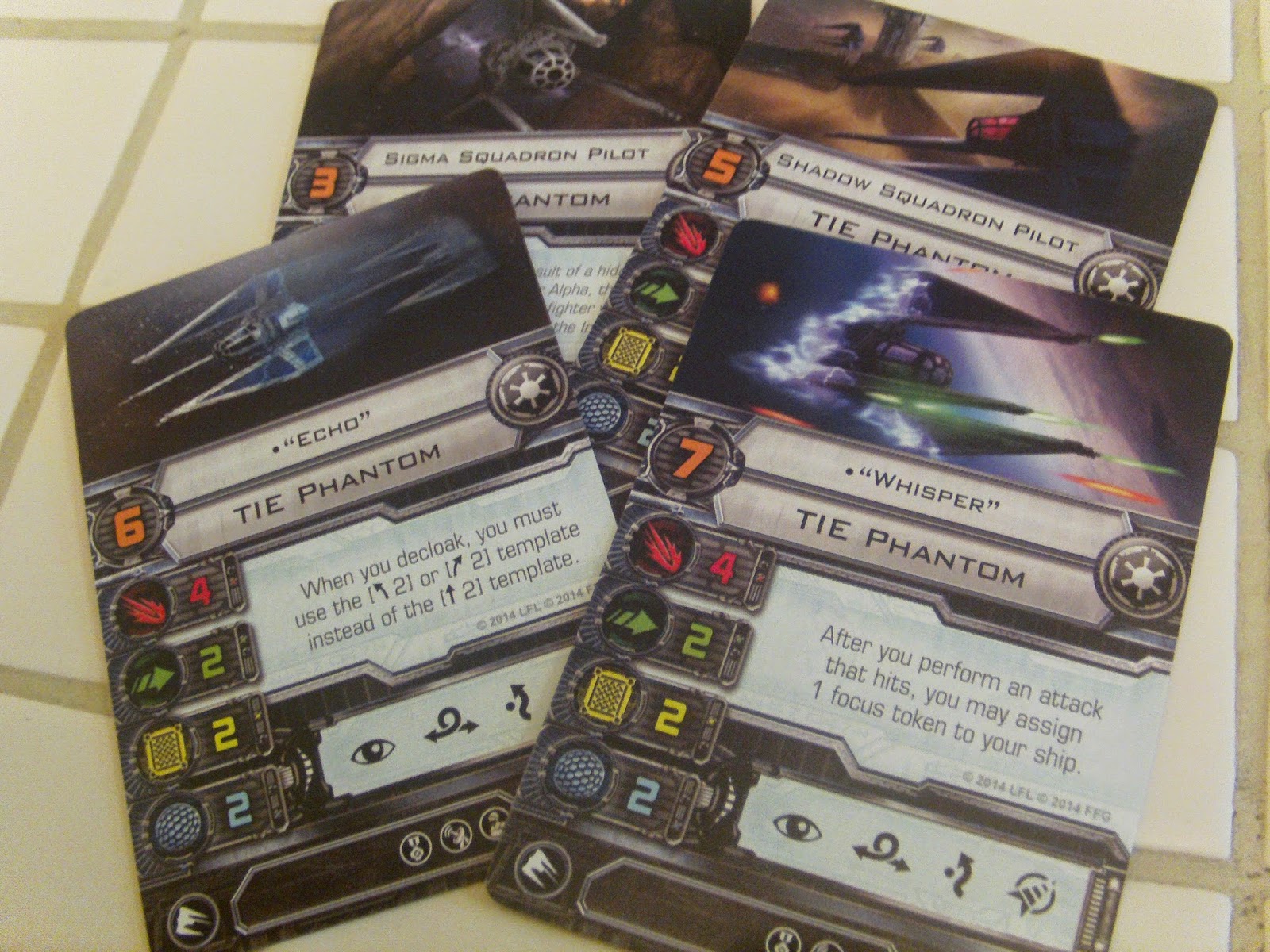 As far as pilots go, my favorite is “Whisper”, which has a neat little ability: After you perform an attack that hits, you may assign 1 focus token to your ship.This can give you more options when defending after taking the fight to your opponent. When you combine this ability with those of your growing collection of possible upgrades, the Phantom becomes a truly formidable fighter. 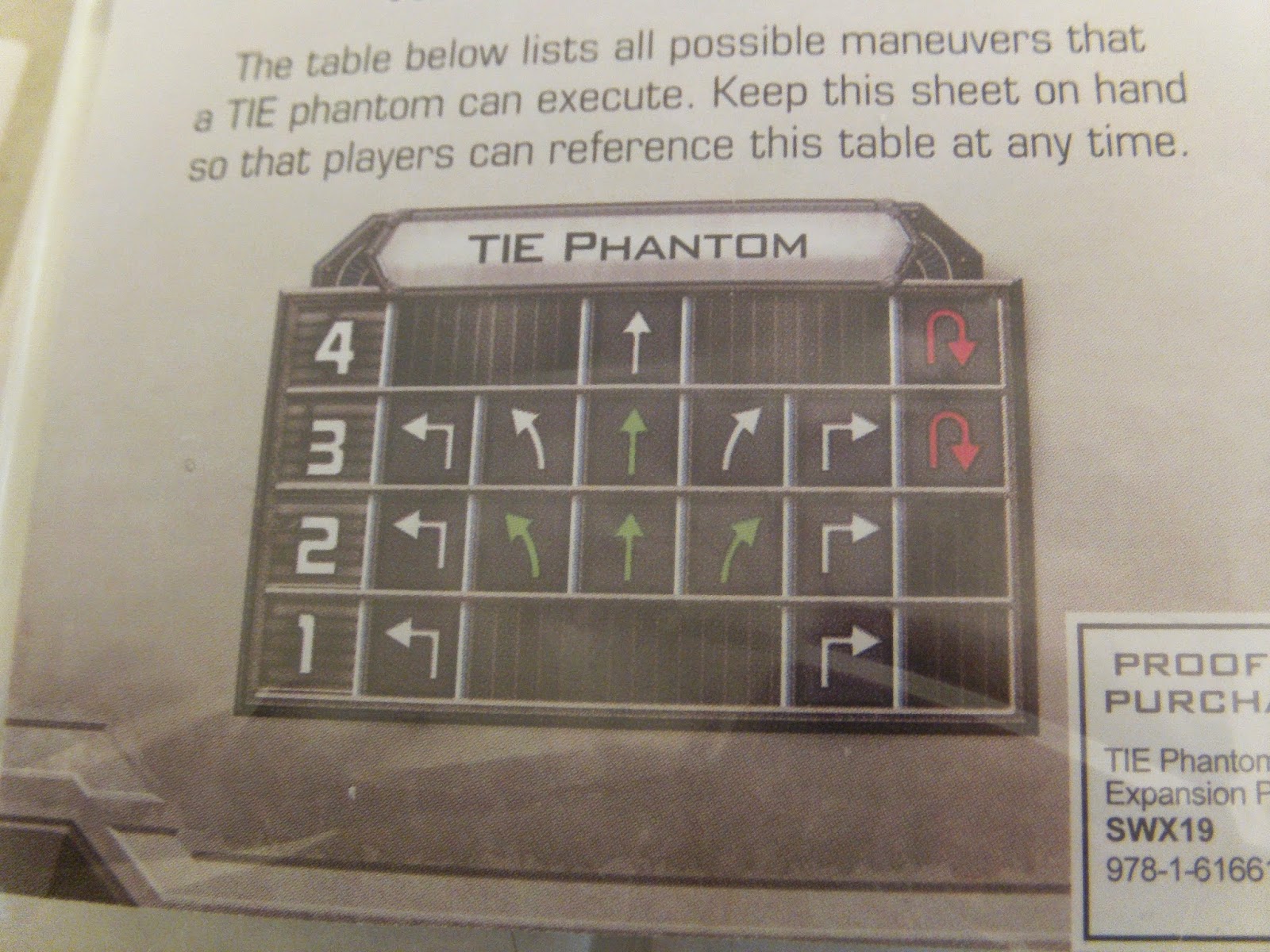 So what about the TIE Defender? It certainly looks a little strange, I’ll give you that. However, I think you’ll find that with its considerable maneuverability and shields, this little monster will be more than a match for any Rebel pilot- even a young pilot from Tatooine that we all know and love. 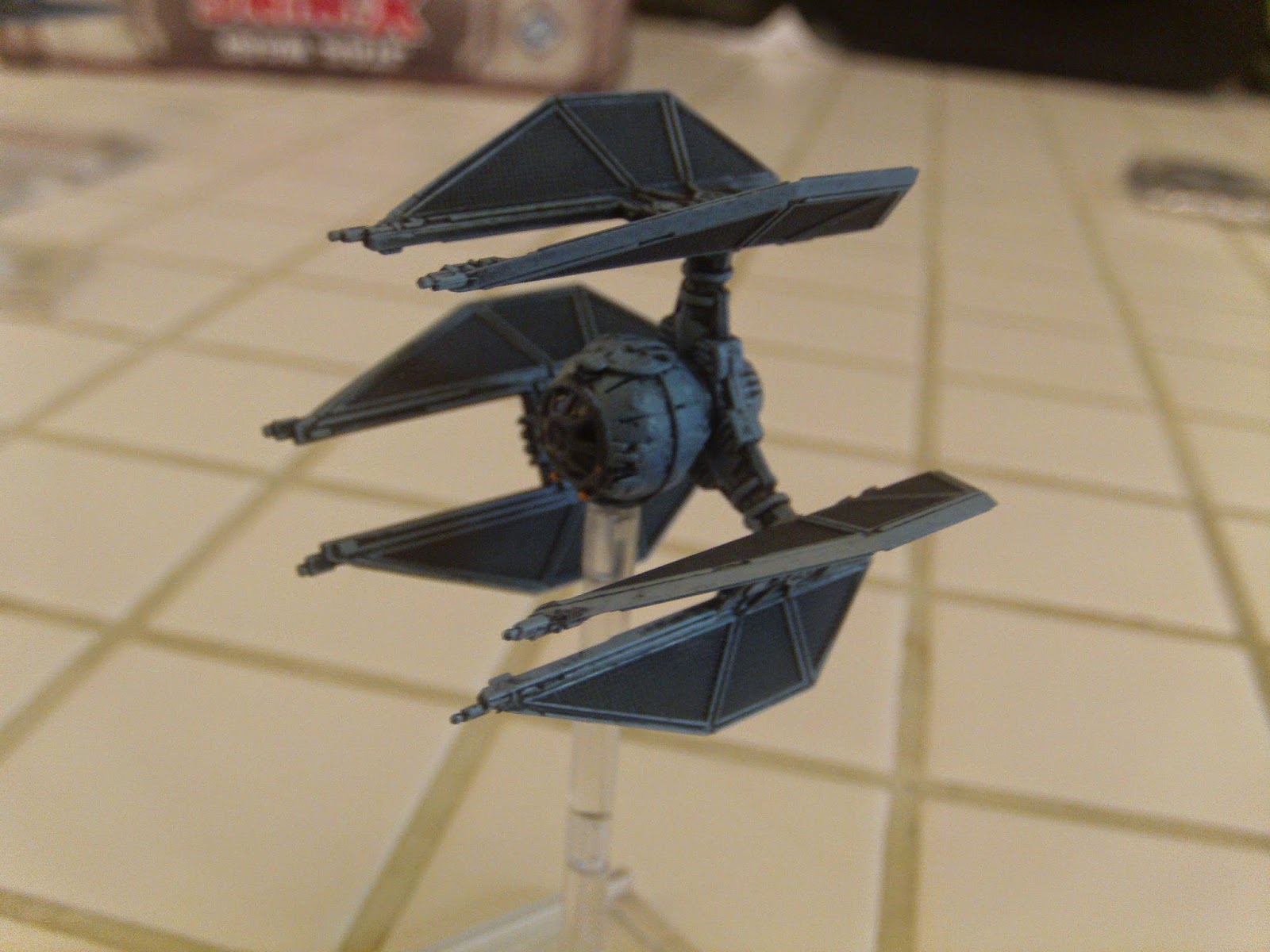 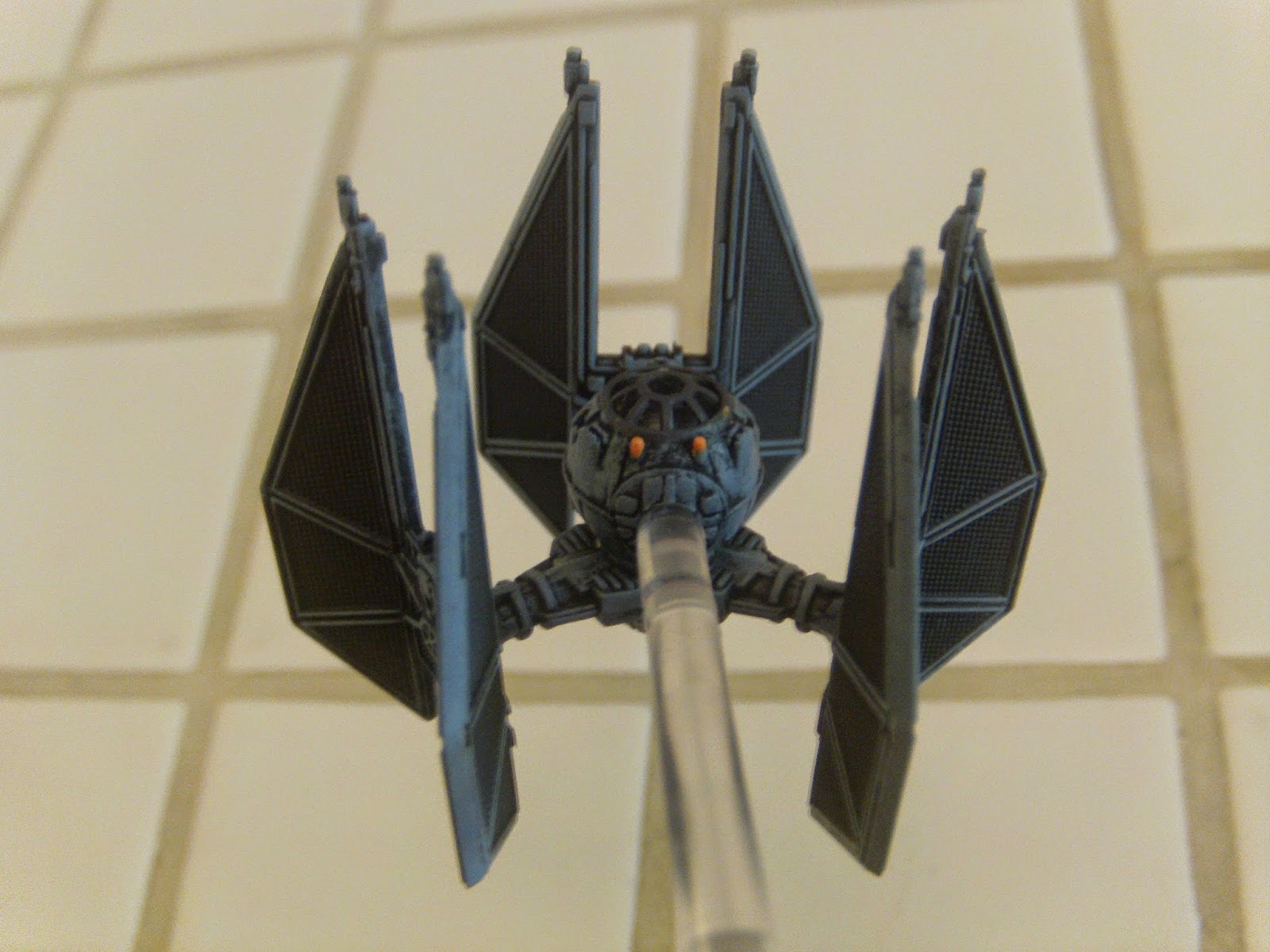 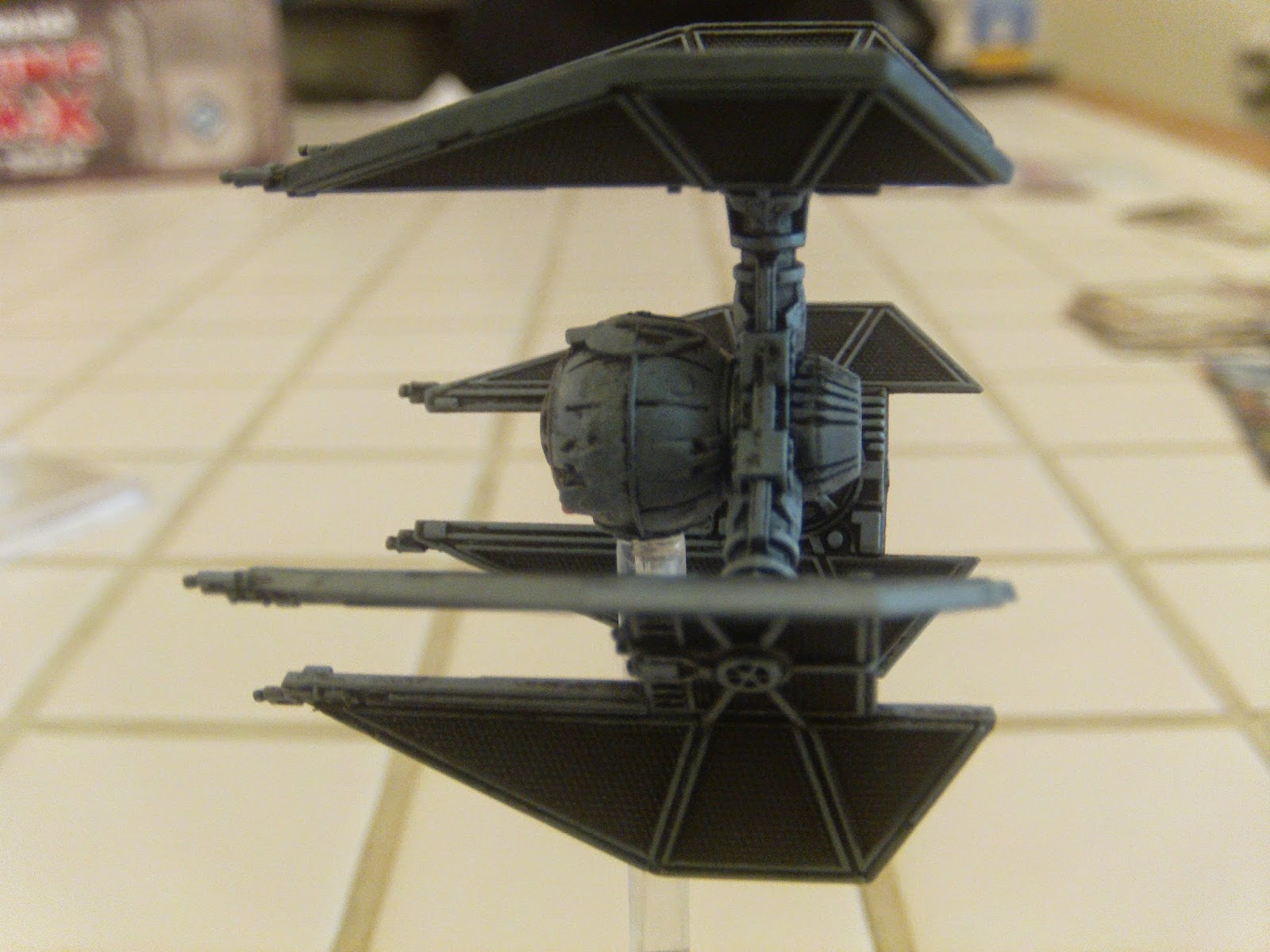 With a top speed of 5 and the ability to execute a Koiogran Turn at speed 4 without receiving a stress token, this ship is extremely maneuverable. When you combine this with the fact that all of its stats are rated at a 3, the TIE Defender will definitely give your opponent a cold feeling of dread when it joins the fray. 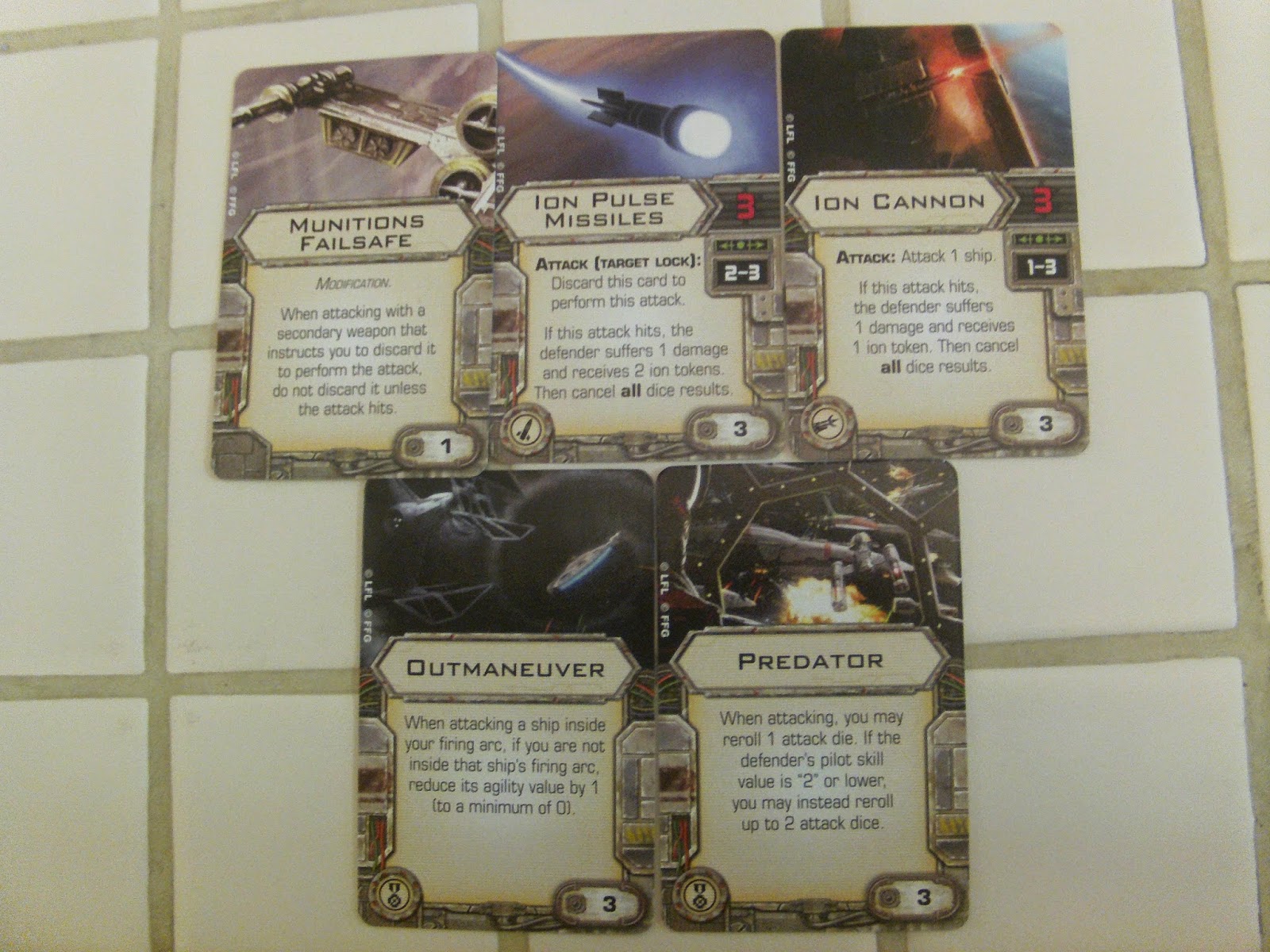 The TIE Defender has 5 upgrade cards to add to your arsenal: 1 modification (Munitions Failsafe), 2 secondary weapons (Ion Pulse Missles and Ion Cannon), and 2 elite talents (Outmaneuver and Predator). While these may not seem like much, the Ion Cannon’s ability: If this attack hits, the defender suffers 1 damage and receives 1 ion token. Then cancel all dice results.Means that you can add insult to injury by not only disabling your opponent’s ship, but also damaging it as well. I can assure you that proper implementation of this upgrade card will have Rebel scum pulling their hair out in frustration in no time. 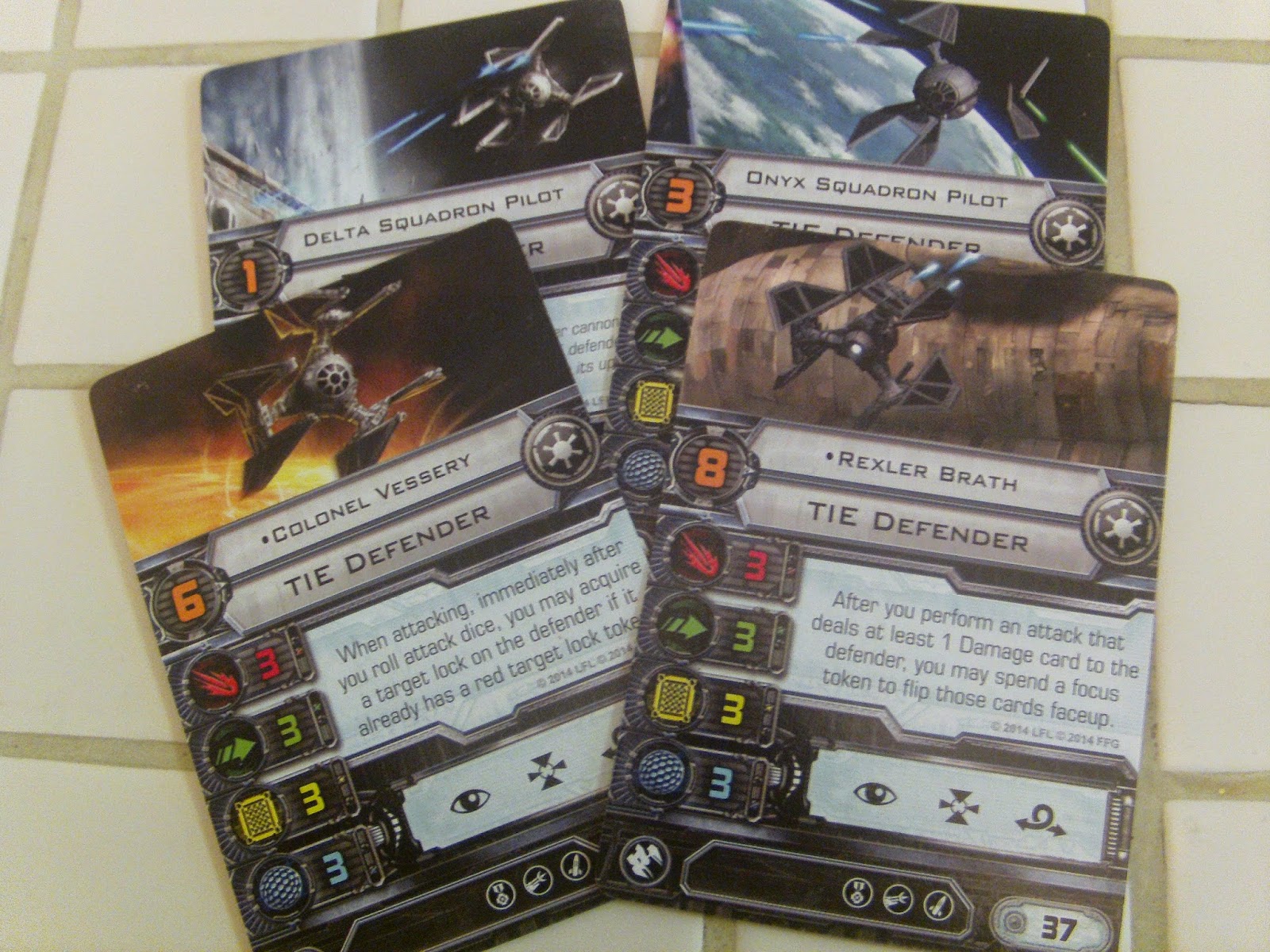 When it comes to pilots for this monster, Colonel Vessery has a neat ability concerning target locks, but it’s Rexler Brath’s ability that can really wreak havoc in your opponent’s fleet: After you perform an attack that deals at least 1 Damage card to the defender, you may spend a focus token to flip those cards faceup. If you can think ahead and have a focus token available, this can positively cripple your opponent’s ships with every successful hit, turning minor damage into critical damage. 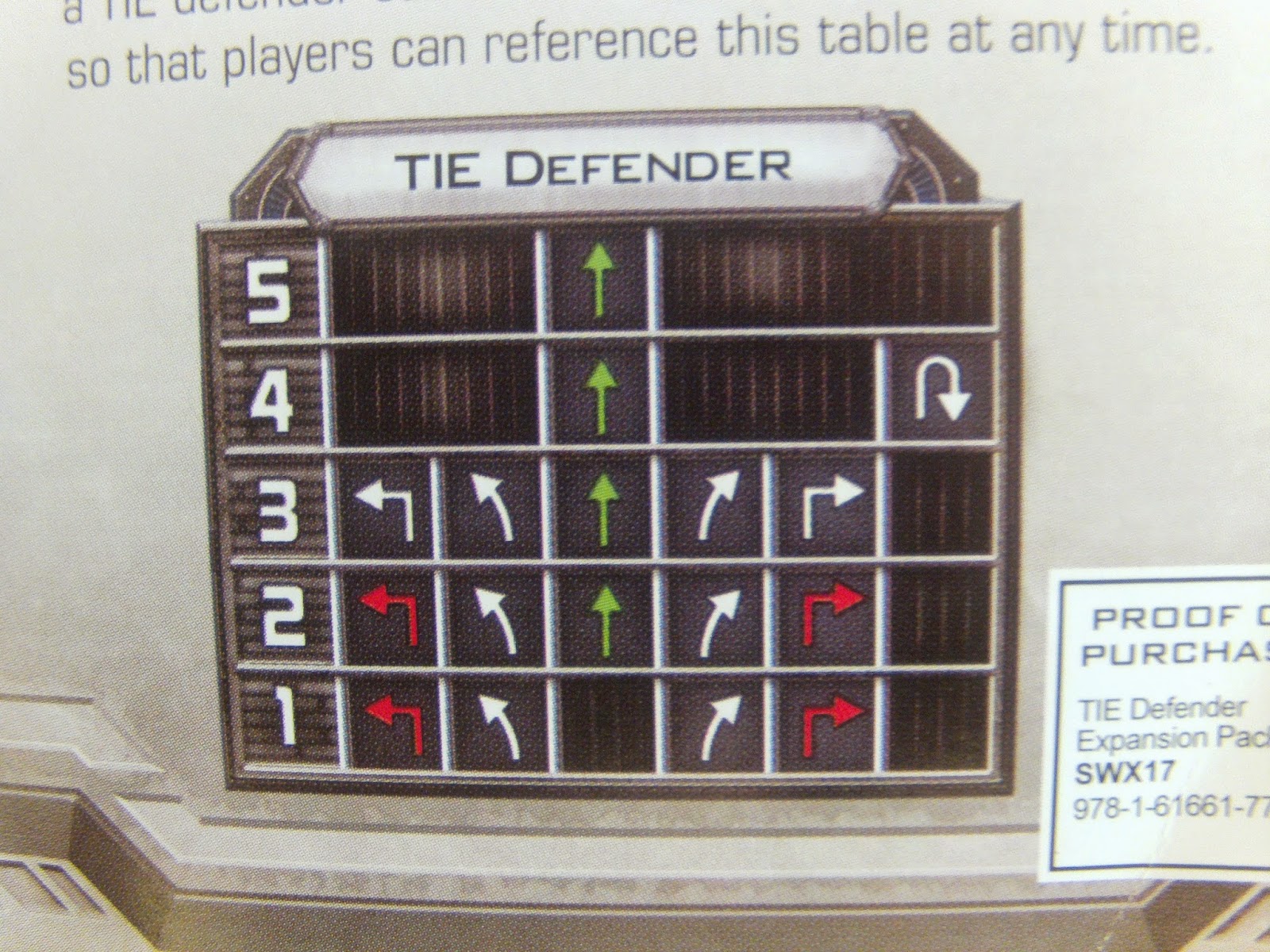 This two ships are absolutely a must have for any Imperial fleet. With the inherent sneakiness of the TIE Phantom and the brute strength of the TIE Defender, you’ll be able to turn the tide of any battle. (What’s more, like so many of these miniatures, they’ll look positively stunning on your shelf amongst your other ships.) Don’t miss an opportunity to scoop up these ships, Commander. The Empire will thank you for it.
Want to take the fight to some Rebel scum with these ships? If you live in the Bloomington area, you can find them at The Game Preserve. If not, check them out at your local game store. Support local stores!