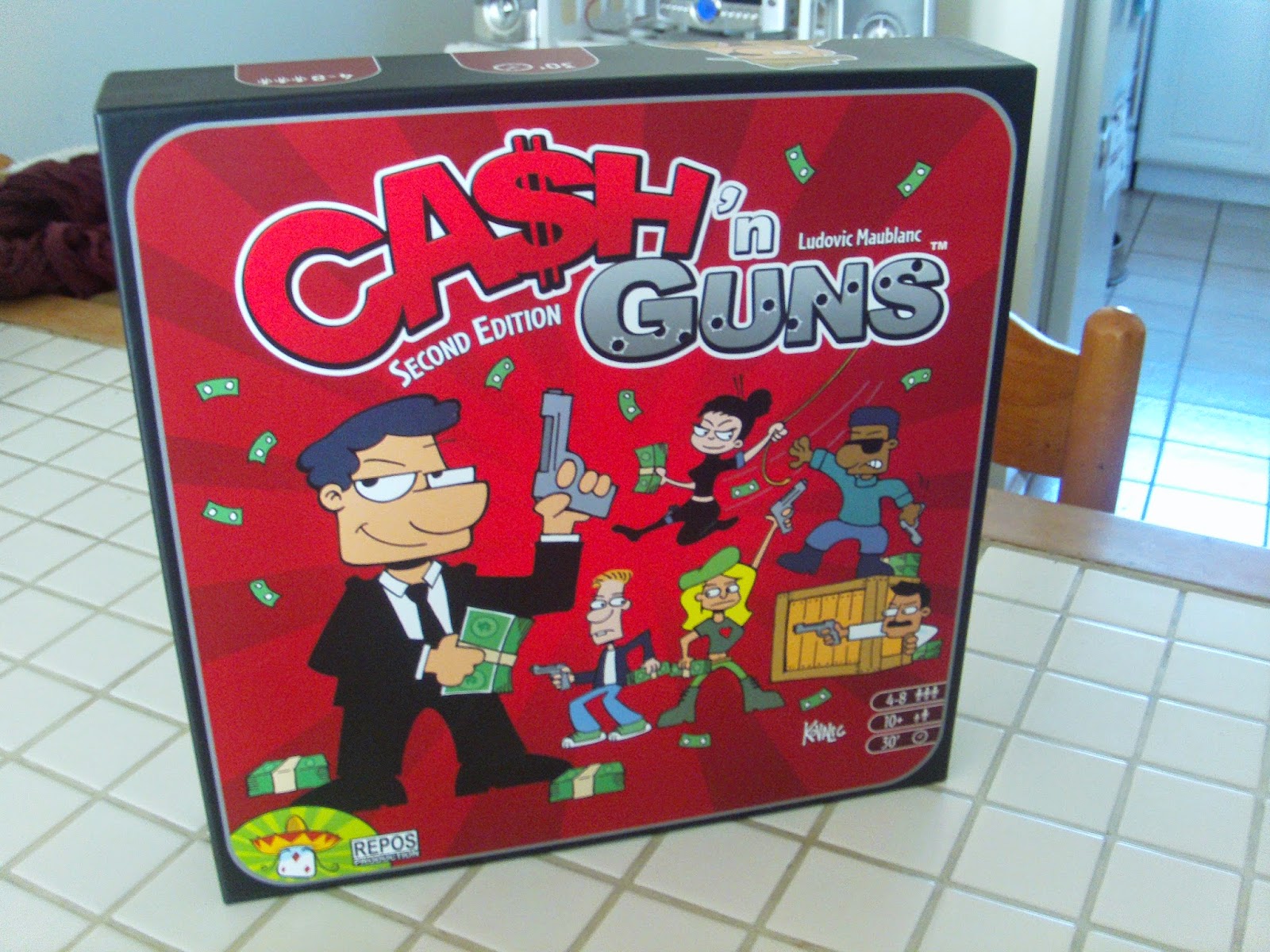 Sometimes, you want to play a game with your friends to show how you can out-think them. Other times, you may pick out a game to show how you can work together as a team. Then, there are those times where you just want to be able to look your friends in the eye and lie to their faces. This game, dear readers, belongs squarely in the last category.
Ca$h ‘n Guns (second edition) is a game of bluffing for 4-8 players, published by Repos Production. The premise is rather simple: you and your friends are Mafiosos who have just pulled off a huge heist, the resulting loot of which is sitting on the table in front of you. However, (as so often seems to happen in these situations) a disagreement has arisen as to how the haul should be divided. Each round, eight loot cards are laid out on the table. Next, each player thinks of who they want to point their gun at and selects a card from their hand- either a Bang or a Click. Then, everyone simultaneously points their gun at another player- and this is where the game gets interesting.
Each player makes the choice of whether they want to stay in the round (and risk getting shot) or put their gun down, removing themselves as a target. If you get shot or put your gun away, you lose your chance to get a share of the loot that round. So the question you have to ask yourself is this: Your friend pointing their gun at you- did they put a bullet in that gun? What’s more, if you get shot three times, you’re out of the game permanently.
What adds to this interesting dynamic is the Godfather. Each turn, a player is designated as the Godfather. When all the players have pointed their guns at each other, the Godfather gets to change one person’s target. “What? You think you’re aiming at Jimmy Two-Spits over there? No, no, no… you’re going to aim that gun at Shelly The Bomb, instead.” This simple mechanic throws a lovely little monkey wrench into the workings of what would otherwise be a pretty straightforward game.
Once this is done and those who have decided to press their luck stay in the round, cards are flipped, people may be shot and those still standing each take a turn selecting a loot card (starting with the Godfather) until all the loot that round is gone. What kind of loot is available, you ask? Well, there are denominations of cash, varying expensive diamonds, paintings, ammo clips (which give the possessor another Bang card) and First Aid Kits (which heal wound received from gunshots). The player who has collected the most diamonds at the end of the game earns a massive rock worth bonus cash, and while the paintings aren’t worth much on their own, collect enough of them and you’ll earn yourself a sizeable haul. After eight rounds, whoever has the highest net worth wins the game (or whoever is left standing).
I’m just going to come out and say it: I lovethis game. The premise and rules are both simple and easy to teach to new players, the art style is lovely (if a little similar to Munchkin) and the foam guns that come with the game are fun to hold and point at your friends and family. There aren’t a lot of components, but the game itself isn’t on the table, it’s in the heads of the players and how they interact. “I swear to you, man, there is not a bullet in my gun- trust me. Don’t you trust me?” You want to find out who wears the pants in a relationship? Watch as a couple point their guns at each other and a psychological power struggle unfolds.
In summary, Ca$h ‘n Guns is an example of gaming done right. This is a game that doesn’t get bogged down in rules and procedures. This isn’t a game that relies on finely tuned mechanics or grand stratagems. This is a simple game of bluffing and pushing your luck. This is a game where the experience isn’t in the components or the theme, but instead in the players and how they interact. I heartily recommend Ca$h ‘n Guns for your next Game Night. Pick this one up, readers. You won’t be disappointed.

Do want to hold your own in a shootout? If you live in the Bloomington area, you can find this game at The Game Preserve. If not, check it out at your local game store. Support local game stores!