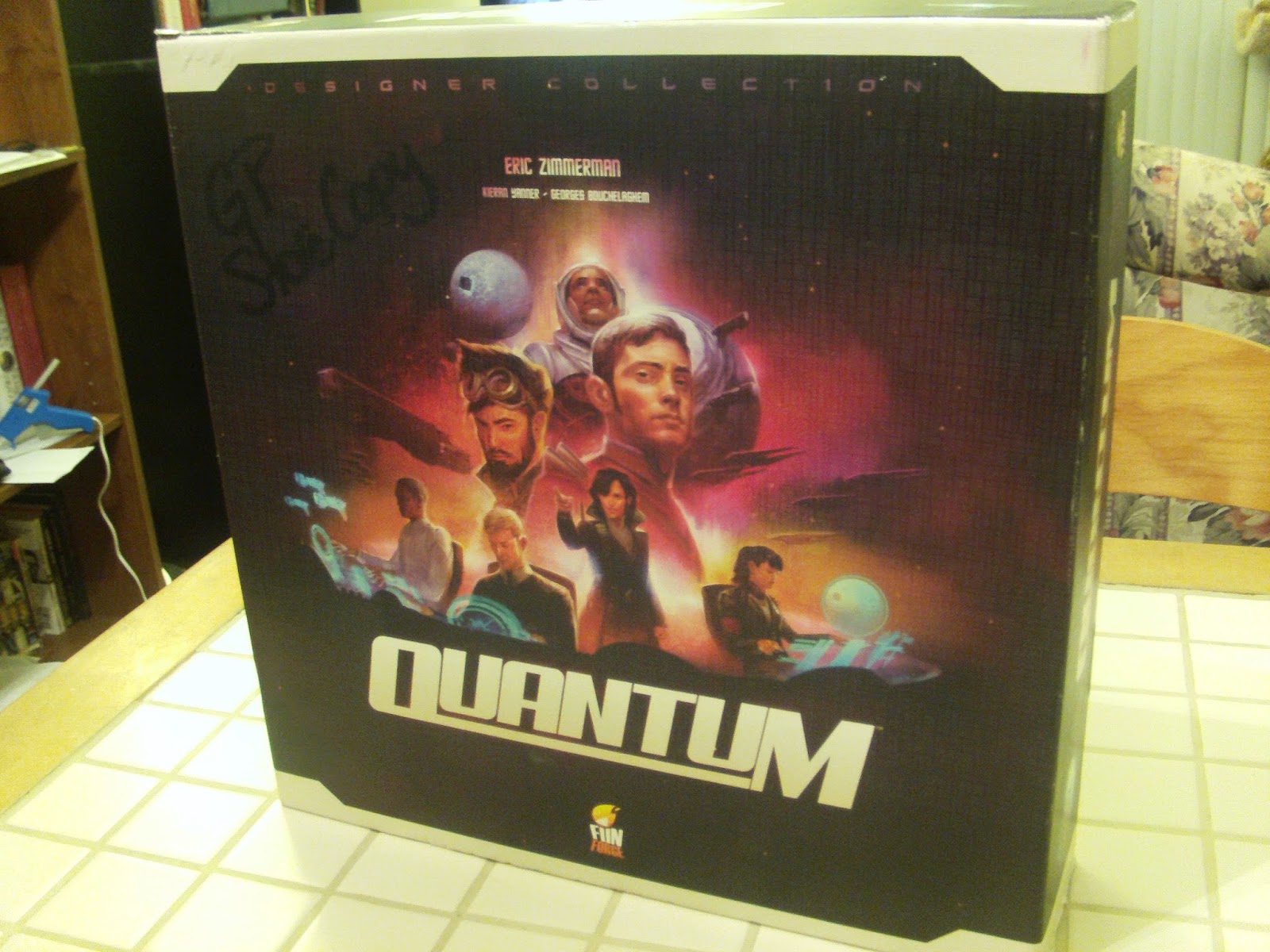 Space- it is a lonely, ruthless void. It is a place where to make decisions you must roll the dice and hope for the best. But what if you aren’t the only one rolling the dice? What if there are dice everywhere? What if your ships themselves are dice? These are important questions that perhaps no one has ever asked.
Nevertheless, these questions are answered by Quantum, a dice-based area control game by Eric Zimmerman (a native of our own town of Bloomington) and published by Funforge in 2013. It is for 2-4 players and a game generally lasts 30-60 minutes. In Quantum, you’ll find yourself at the head of one of four factions, each identified by a color. The object of the game is to surround a planet with your spaceships (signified by your dice) with the correct number of pips in order to construct a Quantum Cube on the planet’s surface. This makes the planet a new base of operations for your faction, enabling you to launch new ships from that location. The first player to construct all their Quantum Cubes wins. Simple right?
The problem is that the number showing on your die signifies two things: the number of spaces it can move and its strength in battle. Low numbers are more powerful in a firefight (the lowest number wins in any given engagement) but will move ponderously across the board. In addition, each ship has a special ability (from moving diagonally to picking up an adjacent ship and moving it with them to their destination- each of the six ship’s abilities are unique) that can be employed once each turn. Furthermore, if you don’t like the ships that you have, you can spend one of your allotted actions each turn to re-roll one of your dice- changing it into a different ship with new capabilities.
The result of all this is that is that Quantum soon evolves into a game of chess on an epic scale- (I’m not normally a fan of chess, but in this case, I enjoyed the experience). You’ll look at the board and soon take in all the possibilities- analyzing what your own forces are capable of and what strategy your opponent may soon employ with their own. What’s more, by placing Quantum Cubes or getting your base’s research level to six (you have a research die in your base that you can spend an action to advance to the next number) you’ll earn yourself the right to choose from an array of upgrade cards on the table. White cards give your faction permanent abilities (such as being able to choose what number you want when you re-roll a ship) while black cards give you special, one-time only abilities (such as adding an additional ship to your fleet).

What’s more, the board itself is made up of modular tiles. The game comes with several basic and advanced board layouts for you to try and then encourages you to make up your own. This adds an incredible amount of replayability to the game. If you’ve been reading my reviews, dear reader, you’ll know that if there’s one thing I love in a game, it is replayability.

If I had one complaint about this game it would be this: the factions. The rulebook goes to great lengths to set the theme for the game- several factions of the remains of humanity duking it out for supremacy in a cold, uncaring region of space. The blues are Imperial bullies, the greens are science-obsessed weirdos intent to evolve humanity, and so on. However, in the game, the factions are identical and interchangeable. I would have loved it if the greens had bonuses that helped them with research or the blues had ship designs more focused on firepower (or even better, the ability to destroy opponents’ Quantum Cubes). But in the end, this is only a small complaint. Quantum to me into orbit, but it had the potential to go to the stars… I like being in orbit, though- so I won’t grumble too much.
Quantum is a solid strategy game that can keep you occupied for game after game. The concept behind it is fresh and original. The strategy behind it is easy to understand and there aren’t so many rules that you’ll feel bogged down and tied to the rulebook. If you’re in the mood for simple, yet endless strategy, Quantum is the game for you.
Want to take to the stars? If you’re in the Bloomington area, you can find it at The Game Preserve. If not, check it out at your local game store. Support local game stores!