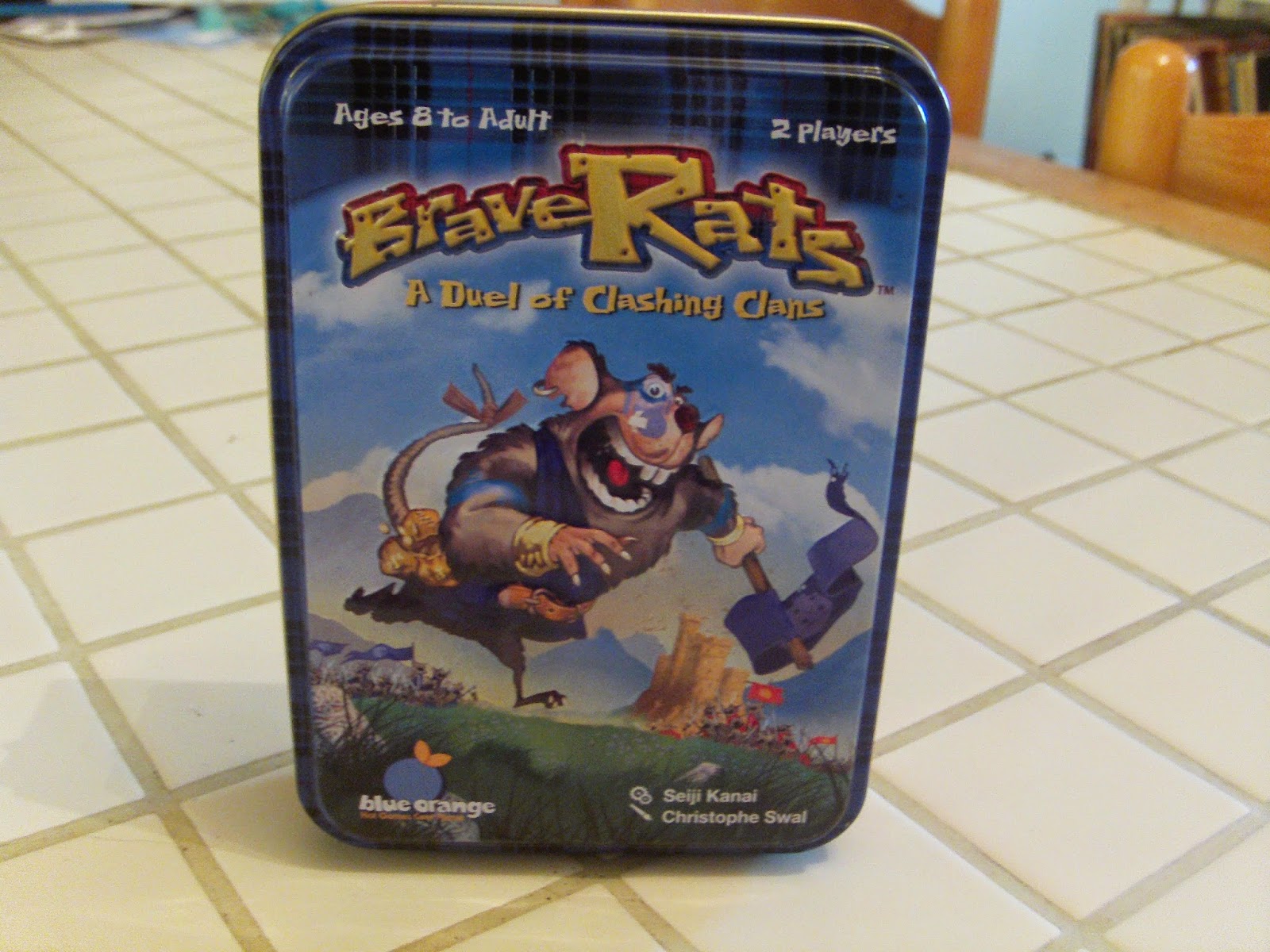 Sometimes you want an epic game involving a plethora of components, intense strategy and a board so large that it takes up your kitchen table for at least a few hours. Sometimes you want a small card game that you can whip out in quieter moments to pass the time with one friend. This game lands squarely in that latter category. Brave Rats is a two player card game from Blue Orange Games- and here’s the thing, a game of Brave Rats lasts at the very most- five minutes. When you’re playing with someone who is familiar with the game, that length will drop down to about thirty seconds.
Each player has eight cards, each one of which portrays a rat from a Scottish clan. One clan is red, the other blue. Each rat has a number (ranged from 0-7) a title (Musician, Spy, Wizard, Prince, etc.) and a special ability. If you are familiar with Love Letter, I think you can see where this is going. Each player plays a card face down and then flips them over at the same time. The rat with the highest number wins that round. If you win four rounds, you win the game. Ties are set off to one side and won by the winner of the next round, causing a quick avalanche of scuffling rats to land in your lap, winning you the game.
It is the special ability of each rat that introduces a hint of strategy to this game. For instance, the Musician causes the round to be put on hold (treated as if it were a tie) despite the fact that the Musician’s number is 0, meaning any card could beat it (if it weren’t for its special ability). If an Assassin is revealed, the card with the lowest strength wins (instead of the highest). If the Wizard is revealed, he nullifies the special ability of the opposing rat. And so on, and so on, and so on.
So, Brave Rats quickly turns into a game where you are eyeing your opponent, trying to figure out what card they may lay down, and what card you should play to not just get around that rat’s number, but also its special ability. But is it any good? Yes and no. I love the art style (which is cartoony and unique- each rat has their own distinct look that brings across a lot of their personality at a glance) and the fact that the game comes in a lovely compact tin makes it perfect to slip into a purse, backpack or large pocket. This is a game perfect to bring to a bar or pub to pull out when things are running slowly, or at a restaurant if you’re waiting for your food. The problem? It’s only for two players! This makes it great for couples, but not so good for a small group of friends- most of whom will be sitting there watching you play. I suppose you could trade off, new-player-plays-winner-of-last-game-style… but I’d really love to see Blue Orange Games come out with a second set of cards (perhaps with green and yellow clans?) that could be combined with the first to make it a four player experience- but that’s just me.
In the end, these are small complaints, as Brave Rats is a wonderfully concise, compact experience that delivers what is most important in a game- fun. I just wish there was more of it to go around.
Want to occupy a few moments with a friend? If you live in the Bloomington area, you can find this game at The Game Preserve. If not, check it out at your local game store. Support local game stores!