Before we begin, dear readers- I think a little backstory is in order. A couple years ago, I began working at my current job: providing before and after school care at a local elementary school. Our program gives students in grades K-6 something to do in the 2-3 hours before school begins and the 2 hours after school ends. In the afternoons, we provide educational lessons, but in the mornings, we can do whatever we like (within reason, of course.) Over a year ago (on a whim) I brought in a game one morning to play with my students. The game wasn’t Candy Land or Chutes and Ladders– it was Citadels, a game in which each player is trying to construct a medieval city while conniving against each other at every turn. Not only were my students (some as young as the second grade) able to understand the mechanics of the game, they ate it up.
Since then, I have been bringing in a game every day and when I get a new game, I can’t wait to bring it in for my students to try it out. While I do have to work with certain content restrictions (it is an elementary school, after all) their ability to not only understand, but excel at games that are aimed at much older players never ceases to astound me. So today, dear readers, I would like to share with you a small list of games that I think are particularly useful at teaching certain concepts to younger players. I hope you enjoy reading the results as much as I did discovering them. 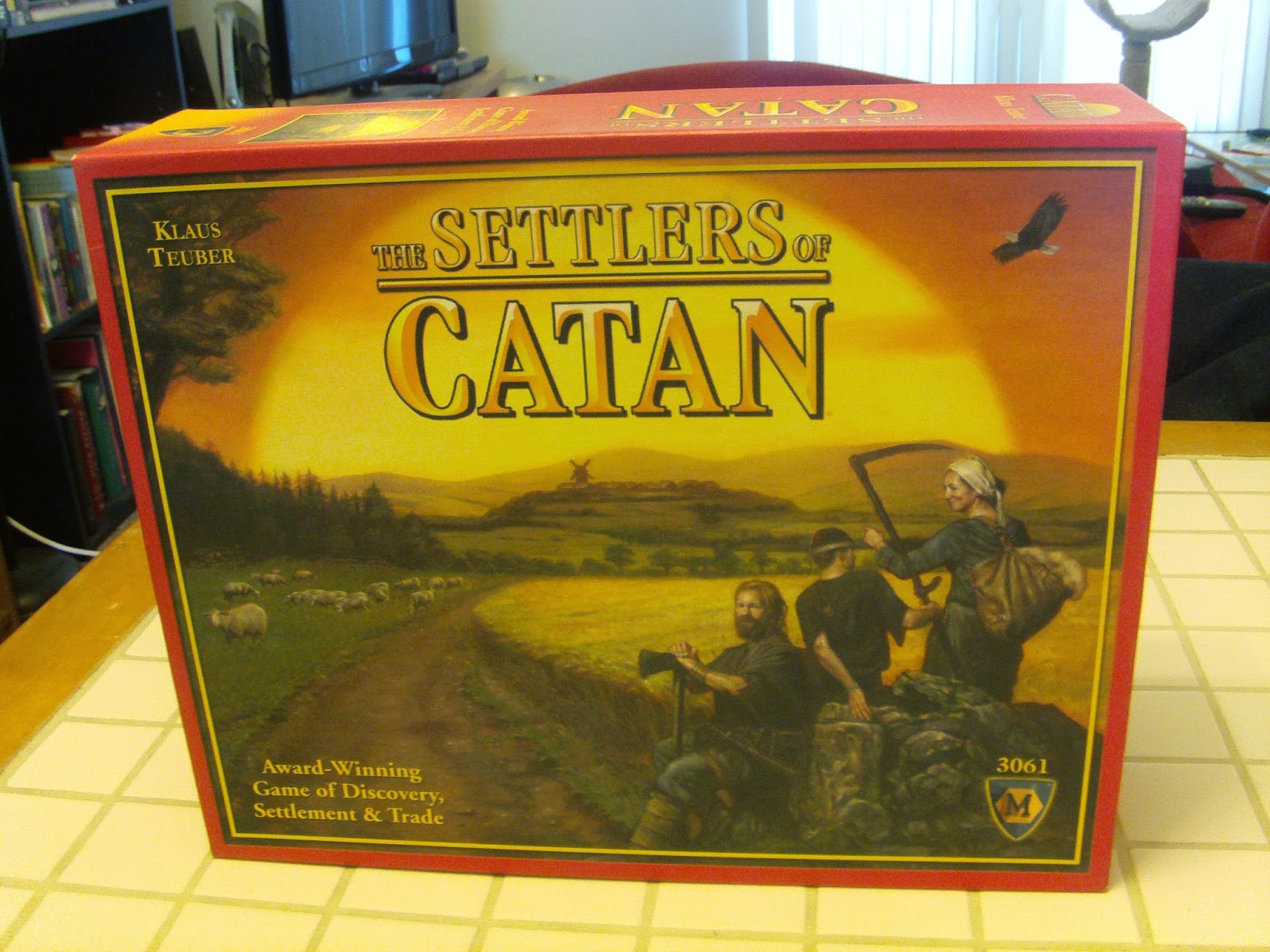 Settlers of Catan
~Negotiation and Trading~
Alright, it is a cliché in the world of board games, but it is a cliché for a reason. Nothing is a better introduction (as a board game) to the skills of negotiation and trading than this eurogame classic. One of my favorite moment playing this game involved a student who (at the time) was in the first grade. While I and three other students were playing a game of Settlers of Catan, he just sat at the table, quietly watching. He had overheard the explanation of the rules and was just watching it all play out between us and taking it all in. Halfway through the game, he leaned over towards me and said, “I’ve figured something out.” I asked him what that was and he replied, “If someone wants to trade you a wood, they probably have a brick and are going to build a road- or a house.” (What older players know as settlements.) As I smiled at his revelation, he continued, “So you shouldn’t trade with them- or if you do, you should ask for more than just one wood.” These are the moments that I absolutely love- when you can seethe lightbulb turn on and you can see the exact moment that they get it. 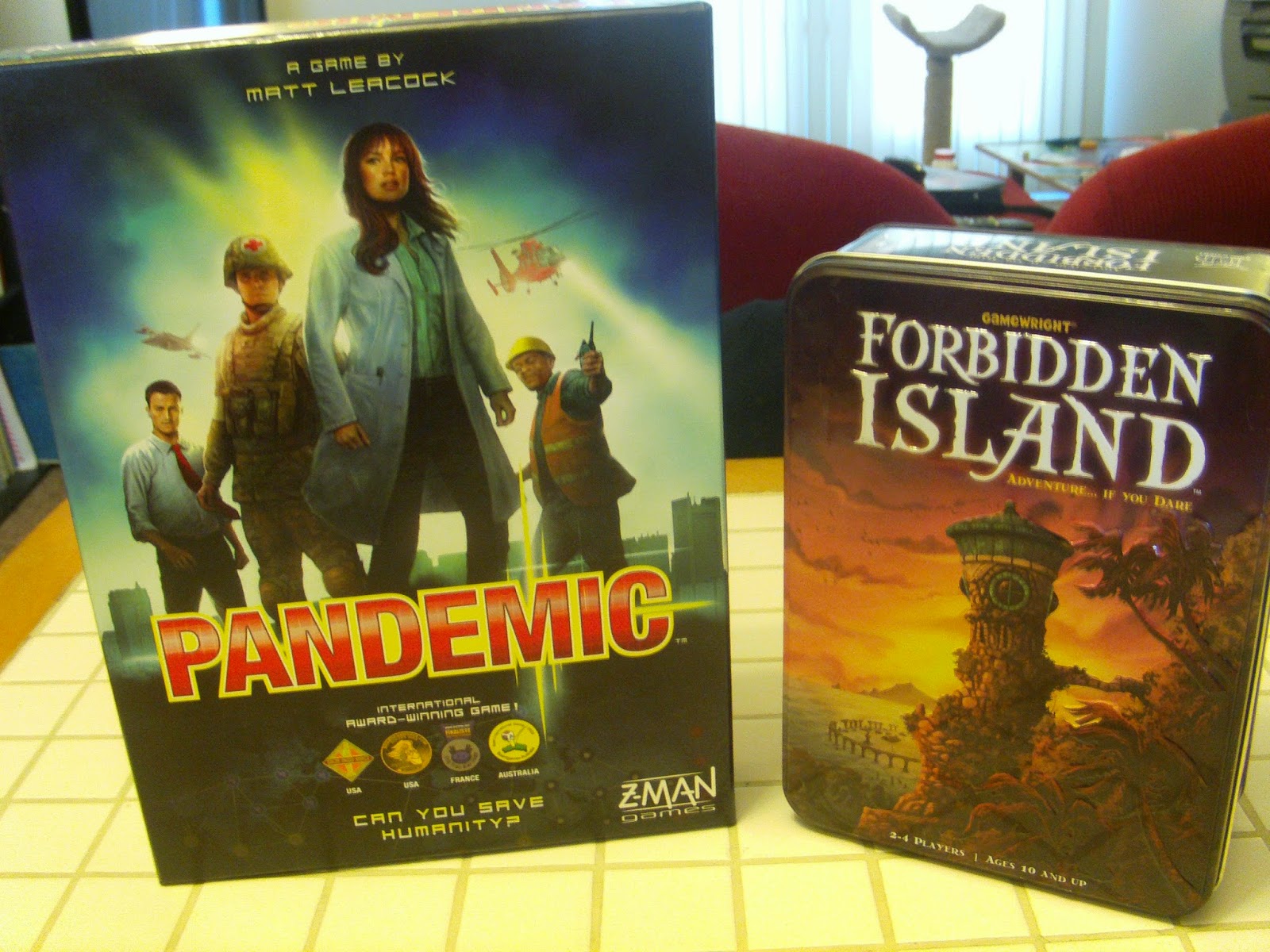 Pandemic / Forbidden Island
~Teamwork~
In a world of single player videogames or even multiplayer videogames where you are a lone gunman mowing down wave after wave of fellow players, the skill of teamwork seems to be hard to find and even harder to foster. However, Pandemic and a similar game by the same designer made for younger players, Forbidden Island force players to work together to solve a problem. In one game, you are working together to combat global outbreaks of disease and the other, you are working together to get several shiny treasures off an island that is steadily sinking into the ocean. Surprisingly enough, my students actually prefer Pandemic to Forbidden Island. Despite the fact that they are beaten by the game mercilessly time and time again (a group of my students did beat it once, with only a minimal amount of help from me) they constantly ask me to bring this game to the table. Why is this? Because they love the idea of working together to solve a common problem- something that they have so little exposure to in most games. 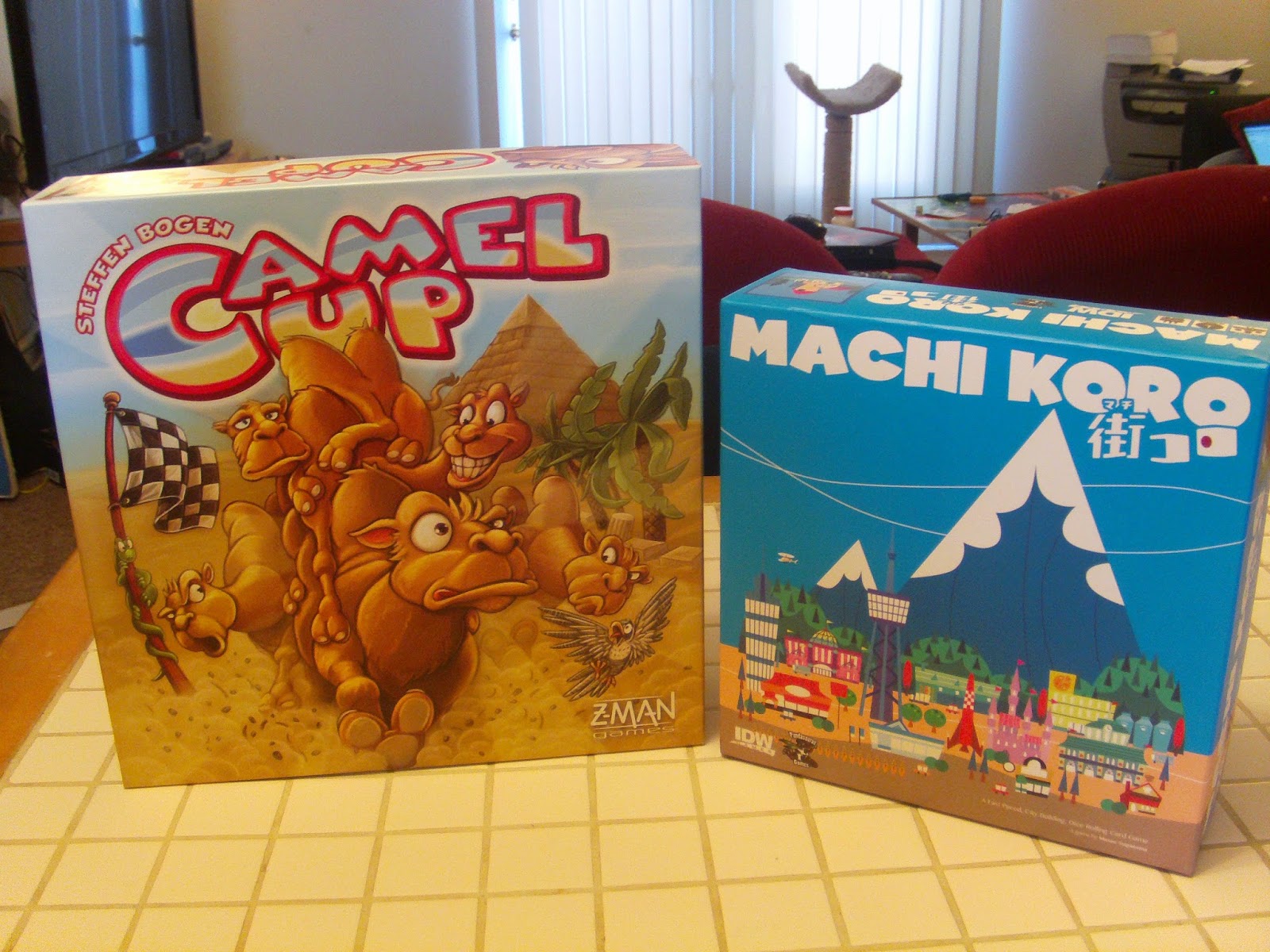 Camel Up / Machi Koro
~Probability and Chance~
Although our review of Machi Koro is still forthcoming, both it and Camel Updeal with similar mechanics. Whereas one deals with rolling dice to move camels of a racetrack (and betting on which ones you think will make it into the lead) the other deals with rolling dice to collect money from cards that have the same number you just rolled (and using that money to buy more and better cards to get bigger payoffs). Either way, these two games deal with the concepts of probability and chance (something that these students typically won’t deal with in a math class until after they have left elementary school.) In each case, you’re dealing with a specific range of numbers (with Camel Up 1-3, and with Machi Koro, 1-12) and students very quickly pick up on the likelihood of a given number coming up- thereby determining whether something is a long shot, or a sure thing. Is betting on a camel race not appropriate for elementary school students? Personally, I think it is on the line- but there’s no real money exchanging hands and my students are learning some valuable math skills. Just don’t tell them that. 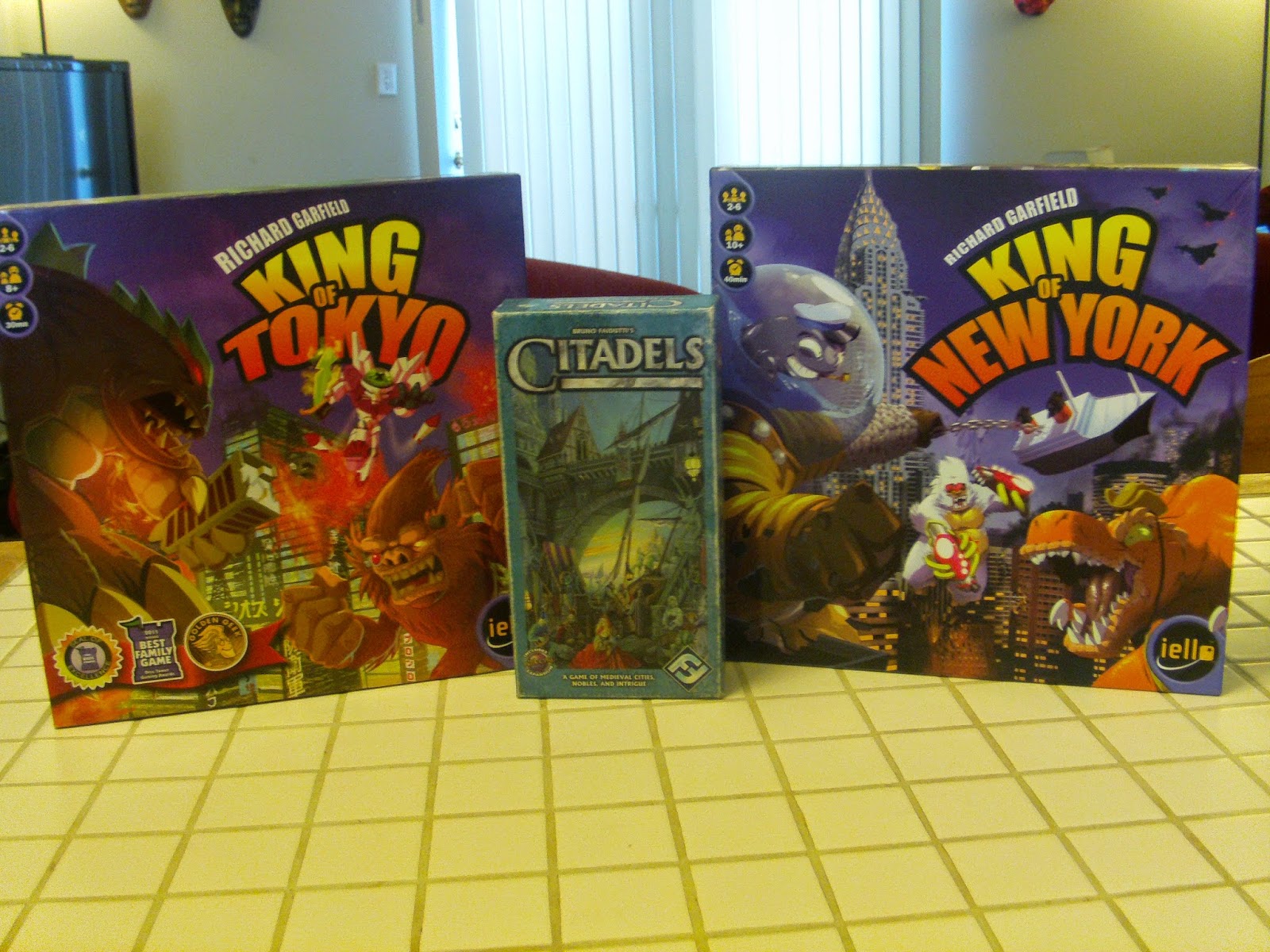 Citadels / King of Tokyo and New York
~Making the Most of What You Have~
One of these games is a card game that I’ve already described to you. The others (King of Tokyo and King of New York) are dice games in which you are giant monsters wrecking a city and trying to out-monster your opponents. You do this by trying to roll specific symbols on dice to accomplish various things (damaging other monsters, healing, gaining points, etc.) to gain the upper hand against your opponents. In Citadels, the game revolves around you drafting each round a specific role card (Assassin, Bishop, King, etc.) that will give you specific abilities that round as you try to expand your medieval city. In both of these games, there is one thing that players will come up against time and time again. Sometimes, you won’t get what you want. You may really want to be the Merchant this round to get some extra gold, or you may really want to roll four lightning bolts to gain some energy to buy an ability for your monster. But often, things won’t turn out the way you want them to. However, the beauty of these games is that they teach you to work with what you do have, rather than lamenting the fact that you don’t have what you want. My students pick up on this incredibly quickly and if you watch them carefully, you can even see as they change their strategy from round to round, trying to make the most of what they have. Just as a note, you may need to remove some cards from Citadels to make the content appropriate for younger players, as I do (such as the Prison, which has minuscule depictions of people on various implements of torture)- not something that I really think is appropriate for younger players.
If there is one thing that I have learned from all of this, it is this: no matter what game you choose to play with younger players, all games will teach several key concepts. These concepts are:
-Basic math skills such as counting
-Waiting for your turn
-Not to touch other people’s pieces without permission
-Respecting other people’s things
(Such as not bending cards, not putting pieces in your mouth, etc.)
-Good sportsmanship
So it doesn’t matter what game you choose to play with younger players (so long as the content is appropriate). What matters is that you sit down and spend some time with them, laugh with them, and watch their understanding of the world grow. So if you have a child, (or know one personally some other way) try playing a game with them that is more complex than the ones we grew up with- they might just teach you a thing or two.